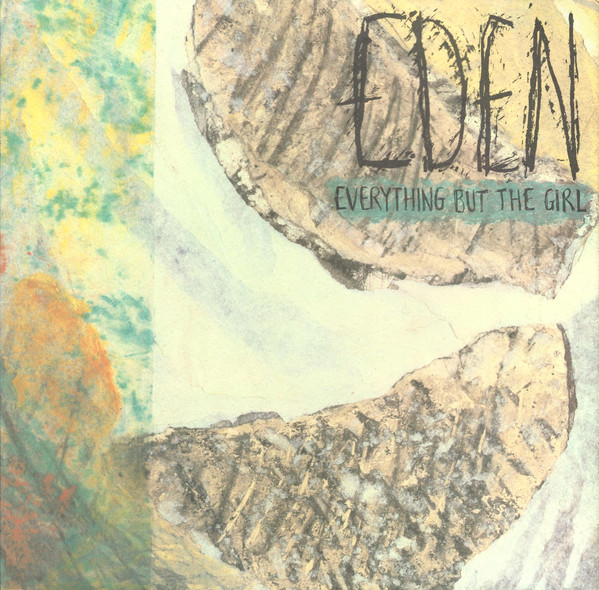 I tortured myself with Everything But The Girl`s Eden. Its clipped guitar chords, and stories of “love gone wrong” doubling for pins. I listened to it constantly and everywhere on a Sony Walkman. Way over self-indulged myself in its Indie Chet Baker blue. Convinced myself of its notion that romance will always be broken. Fascination in particular echoed my virgin fears and imagined shadow. “How might I compare to others in a lover`s little black book?” From 1986`s Cross My Heart to 1995`s Missing, Everything But The Girl seemed to put into words and music the course of a particular someone found then lost. Drunk at the end of their phone. A need to retrace my steps down long-vacated streets. Hanging about an old address.

Tracey Thorn and Ben Watt met at University in Hull. In a match made by their record label, Cherry Red. Where both signed as teenagers. The Punk-inspired Tracey as a member of the wilfully lo-fi Marine Girls. Where Jazz bandleader`s son, Ben, wrote songs with Robert Wyatt. His North Marine Drive containing a sublime cover of Bobby D`s You`re Gonna Make Me Miss You When You Go.

“You`re gonna make me cry if you don`t know.”

Unaware of the original, it was the first time I`d heard of Verlaine and Rimbaud. Tracey`s voice as distinctive and as emblematic of an independent musical 1980s as Liz Frasier`s. The two of them bonding over the Anti-Rock of Subway Sect`s What`s The Matter Boy? and The Durutti Column. Shared evenings-in in front of Brideshead Revisited. Taking their name from a furniture store ad that declared,

“For your bedroom needs we sell everything but the girl.”

Fans of The Jam they joined Paul Weller as he replaced Mod with the Style Council. Became linked to a “New Jazz” scene that encompassed Hard Bop, Weller`s Cappuccino Kid, and Rough Trade`s Weekend. With whom they later recorded, as Working Week. A scene centred around clubs like The Wag in London and Berlin and Rafters in Manchester. They mixed The Buzzcocks with the Bossa Nova of Stan Getz and Astrud Gilberto. Saw their stripped down austerity as a continuation of Punk`s back-to-basics purity. While Cherry Red had them sharing a producer and studio with Sade. The label dreaming of hits and gold discs. They fell in love with The Smiths. Became Morrissey`s besotted “Kittens”. Got called “miserablists” in the the same breath. “New Realists” by those politer. Their songs of downtrodden women scoring a Feminist cause. Ballads sung in and about bed-sits and L-shaped rooms. Where the personal was political.

My way here was through Red Wedge. The Labour Party`s Pop stars. Musicians like Weller, Wyatt, Morrissey & Marr, aiming to mobilise a young vote. Bananarama, Madness, and Jimmy Somerville, linking arms on picket-lines with Billy Bragg, Lloyd Cole, and Elvis Costello. Butterflies criticised and shot at by the media for not being actual politicians. I saw no harm in it. Better to stand for something. And under Thatcher, better to stand against the privatisation of industry. Its resulting unemployment and destruction of community. Better to wear a badge sometimes, I reckon.

Each And Everyone`s playing.

“I thought all that was over and done.”

I`m in The Three Tuns in Beckenham. A place famed for its Sunday night Arts Lab. The late `60s gathering that birthed Bowie`s Ziggy Stardust. My hair`s piled high in an exaggerated quiff. I look like Steven Patrick  M. at Top Man. Cheap Goth and Psychobilly trappings tempered by a string of Mum`s beads. Anna would drive me here, nurse an orange juice, and watch me get hammered. Then drive me back to her parents` house. Blonde bob, kohled eyes. I see her sucking a straw, mini-skirted, retro-modern, and hitting my pissed attempts at humour with sarky asides. Smiling at her own smarts. It feels like Summer. It`s always packed in here. Too brightly lit. Shoulder to shoulder with neighbours and enemies. Those sisters from across Anna`s street, The Fugs. I fancied the dark-haired one with her button mouth. Her look of amused disbelief whenever I`d try to engage her in conversation. The Tuns was the only alternative jukebox to Croydon`s Disco Pubs, sad Gloria Gaynor P.A.s and glassings.

Anna returned from a “girls`” holiday and incriminated herself by revelling in the exploits of her friends. Wanting to tell me, then falling silent mid-story. Trailing off as she realised that conclusions and punchlines would leave her exposed. “If Jackie was shagging the sailor, and Bev was letting the bartender put his hands up her top, where were you?” Neither of us had a past to speak of. But the thought of her giving it away on a whim, for a laugh, stoked an idea of inadequacy that I`d stolen from song lyrics and left me confused. A boy`s head full of self-ism, self-doubt, and alcohol. I`d thought she was different. Special. I`d thought I was special. Tracey sang,

“Trying not to listen to your lies, trying just to keep hold of myself.”

But I didn`t try not to listen. I just stopped asking. And I didn`t try to keep a hold of myself either. On warm evenings I`d buy two litres of cider and drink them on the way round to Anna`s. Stopping off to pass out in a park. Anna pretended that the holiday never happened. Taking the lead in an abandon that I assumed was driven by guilt. She`d cover me with kisses. Remove my clothes in the midnight of her parents` sitting room. Free with her gift of desire. On the way home I`d carry a quarter bottle of vodka. A staggering figure. Plugged in to my Walkman. Oblivious. I`d get mugged a couple of times a month. My assailants, always younger, always in a group of at least three, and always embarrassed by their haul and eventually their actions. They were only kids, doing what they thought they were supposed to do. Fascination described a demand for detail. For hurt. As if knowing would make it better. Lesser the fool. As if appearing more of a fool were what mattered. When it was hard enough to stand.

One thought on “Love Songs #6 / Fascination”