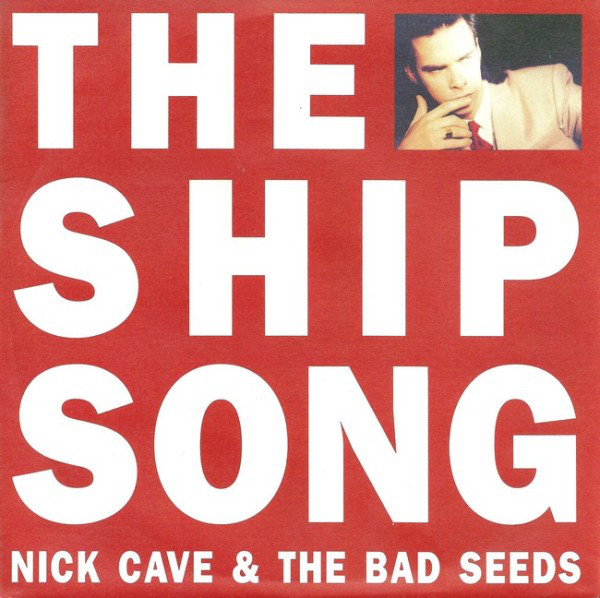 Dave had a copy of Kicking Against The Pricks. I`d say he`d bought it for the sleeve, since hair-sprayed spikes like Nick Cave`s were in vogue at The Underground. But that`d be mean. `Cos the album of Folk and Country covers fell right into the “oeuvre” of the sing-a-long compilations that we`d record for the car. Sleeping Annaleah`s “Yesterday the sun was shining, but you`​re finding the sun it don`t shine all the time”. I was particularly enamoured with the story-telling. The betrayal and honour of Long Black Veil. So I went and bought Cave`s The First Born Is Dead. Which had nothing to sing-a-long to, bar another Johnny Cash moment, the Bob Dylan penned Wanted Man. Still I persevered and purchased From Her To Eternity and Your Funeral, My Trial. Albums and songs I liked for their titles more than the music. I found these records in my local HMV, which at that point was a large, usually deserted “remainder bin” at the wrong end of the high street. There, if you searched, you`d find cut-outs of deleted vinyl hallowed by the NME. Names such as Gram Parsons, The Velvet Underground, and Big Star. I did become intrigued by Cave though, and the doomed balladeer he set out to portray. Taking standards and wringing them for all their pathos. Part Elvis in the chapel, part the reanimated corpse of Robert Johnson, and of course part Cash`s “The Man In Black”. Cave`s menacing drawl set against gallows march drumming. Recounting stories of mercy seats and long time men. Psychotic, churning, riffing, demonic, possessed, out of tune caterwauling Ragas. Scratchy, primitive Velvets-like cacophonies.

“I shot my wife. Brother, I can`t even remember the reason why.”

Broken waltzes, where he plays a barker calling marks into a circus of horrors. His preoccupation with the myth of Stack Lee, and bad men way beyond saving. Murder, death, love, and obsession. Themes he continues to revisit. The place where his songs dwell.

Later I`m not sure he carried this “schtick” off. It began to look too arch to me. Like he was trying too hard. Either that or he was seeing how far he could push a private joke. But he seemed to take himself so fucking seriously. Giving piano recitals at songwriters seminars. So the press took him fucking seriously too. Even as he became increasingly caricatured. The medallion-ed, shirt-unbuttoned-to-the-navel mid-life crisis of Grinderman, looks like said joke, when compared to the incendiary performance he and The Bad Seeds give in Wim Wender`s Wings Of Desire. I do also believe, however, that beneath the performance, privately, he`d admit the same. All this was post Cave`s first band, The Boys Next Door, later The Birthday Party. A band he`d formed at Grammar school. When his family moved from the wheat-belt town of Warracknabeal in Victoria to the Melbourne suburb of Murrumbeena. Where he`d fallen into trouble, burglary and heroin. He was in jail the day his father died in an automobile accident. Receiving the news as his mother met bail. Post stints of poverty in London and then addiction and squalor in Berlin. Cave began re-inventing himself in a sharp suit. Tearing himself away from his Punk roots. The Gothic tag he`d never wanted. A tag he`d parodied by singing Release The Bats. But one that his school teacher`s son`s literary allusions and interest in the Americana of authors like William Faulkner had earned him anyway. Caught up in prose of religion, sin and retribution. He was looking for redemption through language which he delivered like a Deep South hell-fire Old Testament preacher. With a steadfast belief in the Divine and a steadfast belief in song. Shouting, stamping and crawling. A white junkie equivalent of James Brown overcome and carried from the Harlem Apollo stage. Trying to make sacred the raw power of Iggy & The Stooges, as he sang his holy Blues from Berlin to Sao Paulo.

“Come sail your ships around me.”

I am walking home over a concrete and steel railway bridge at midnight. Or later. The bridge divides the street into haves and have-nots. I have your sex in my hair, and my dad will have locked the front door.

I was failing my A Levels when we met. I was singing Wham!`s Wake Me Up Before You Go-Go dressed in Day-Glo, and you were in Top Shop pastels. But black descended quickly. Soon it was all you wore. You Kohled your eyes like Twiggy and Peggy Moffitt, and when we should have been at school, naked in your mother`s bathroom, you dyed our hair the same hue. My old man went nuts. You bought me Joy Division LPs, and stole the doubles of your Dad`s Motown 7s. We were the Mods. Jimmy and Steph in an alleyway in Brighton. Your jet fashions embracing semen like death takes true love to the grave. Weekend evenings suburban gangs of us would drive from pub to pub. Renovated locals with loud music, and names like The Sussex, The Blue Anchor, The Three Tuns. A car was essential. The third step to adulthood. Alcohol and sex in any order the first two. I didn`t drive. I was usually fall-down drunk. But we could always get a lift. We`d ride to a deserted industrial estate, out past Five Ways, and in the back seat you`d let me remove your clothes. Sometimes we`d skip the pubs. At your parents` house, they would ask us polite questions about the night, make us toast, then make their excuses. They would be off up to bed and leave us to it in the living room. Knowing if not here then only somewhere else. Come on the couch. Come on the carpet. Your`s was the hardest body.

I am in my bedroom with the lights turned off. My parents are downstairs, arguing. Behind my closed door, Otis Redding`s These Arms Of Mine plays on repeat. Nick Cave & The Bad Seed`s The Ship Song. I am drinking cheap wine from a hidden bottle. At seventeen, it seemed to me that love should be everything. I`d turn the music up, shut my eyes, and try to imagine it. In the holidays, you and I would sit in this room, listening to records. A little bored of each other. Bored of the horizon of a small town and the prospects of a life lived out there. I saw teenage engagement, pregnancy and marriage within the year. Uninteresting jobs. Friday nights boozing, brawling, lies and cheap affairs. It was all around me. I hated Croydon, and I have to say that I still do, and I hate the clichés that everyone we knew seemed happy to settle for. It`s wrong of me to feel this way. Snobbery`s the only word for it. I failed my A Levels, but spent the next year spilt between a crazy array of temporary jobs, and the library. When I left for University, it was not bravely. Instead terrified, but resolute. I was out of there, and you eventually followed suit.

I am at a Smiths gig in Brixton. It`s December, the end of my first term, and I`m home for Christmas. Johnny Marr is God and you are behind me, holding me. Your desire working on the fabric of your dress, wearing it thin. Making it disappear. I wanted to stand tall, strong, a beacon, a lighthouse, proud amidst the waves, and fucking burn. Head afire. To throw myself from cliffs to prove my love. But you were far stronger. I assumed that I could come and go and nothing would change. But saying “Hi, How have you been?” and putting my hands inside your underwear was an arrogant assumption. Even when you moved away, North, I`d hitch a ride, try to intimidate new boy friends. You`d say “No”, laugh, and let me. But eventually no meant no. We`d meet in London, occasionally and by chance. At concerts and at parties. Chaperoned and in company. You`d be with some guy or other. He would look concerned. Silent in a mixture of perceived threat and genuine disbelief at the state I was in. While you`d shout.

“Why are you doing this to yourself?”

“Why are you always such a mess?”

The drink had the better of me by then. Had me swimming against a tide. Caught in the currents of needing to forget, yet also needing to remember. Serving self-imposed penance for all my mistakes. With the drink my horse-hair shirt, panacea and excuse. Sinking with a girl at the bottom of my glass. At seventeen, I wanted love to be full of wonder, to take my breath away. The way that only sorrow really does. Fumbling on the back seat of that purple Ford Escort. Dave and Lou in the front. Tiny bras hanging from the rear view mirror.

I am a doomed and ageing crooner in a scarlet shirt undone and day old suit. I stand tall, strong, resigned, alone, save a wind that races cloud across the pale blue glow of a city at night. I am standing on a bridge with your love in my hair.