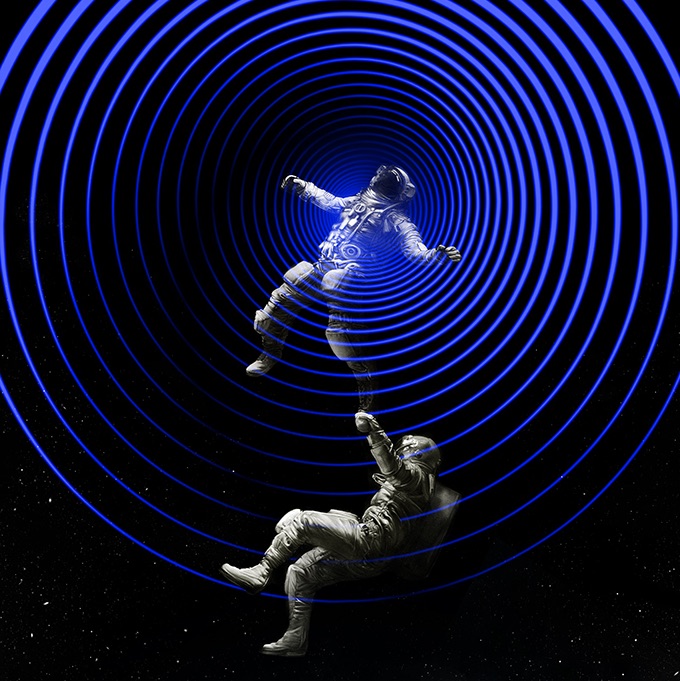 There are three scores for James Gray’s Ad Astra. Max Richter composed two. Then Lorne Balfe was brought into produce another. I’ve got no idea what went on but the soundtrack package features elements from all three, plus two already un-commissioned existing works – Richter`s twenty-one minute Tuesday – from 2017`s Three Worlds, and Nils Frahm`s Says – from 2013`s Spaces. The 2xCDs run to two hours and seven minutes – which is three minutes longer than the film.

I actually went to see Ad Astra twice*. I wasn’t sure about it the first time. I was taken by the visuals. Lunar landscapes reflected in astronauts` golden visors. Colourful scenes of serenity projected onto the wall of a spartan Martian cell. But the internal monologuing of Brad Pitt’s protagonist bugged me. Pitched between Captain Willard in Apocalypse Now and Deckard in the studio cut of Blade Runner. The two of them tied to Terence Malick`s Tree Of Life. Some of it felt hackneyed, cliched, and unnecessary. As with all the films I pay to see these days, I’d read and watched a whole load of online reviews before handing over my cash. I realized this year that this is a mistake. Instead of sitting there rapt in the story unfolding on the big screen, I’m in my critic`s chair. Agreeing or disagreeing with points made by others. I did the same with Once Upon A Time In Hollywood and Joker**. I should let myself be entertained not ready myself for a discussion – that will never come – as to whether or not the movie was radically Cartesian. Cinema should be about spectacle, something that can’t be captured in words. Reviews and Wiki entries are only the equivalent of a dust jacket synopsis. They are not the experience. But yeah, some of that dialogue is cheesy. But despite its flaws it does look great, and I was gripped by the narrative. I really needed Brad Pitt to get home. I couldn’t have him die out there all alone.

I mentioned Apocalypse Now, and when Ad Astra`s production was announced at Cannes in 2016, James Gray said it was gonna be “Conrad`s Heart Of Darkness in space.” So, just like Kubrick`s 2001, that`s what you get. An existential journey, up river, looking for Kurtz. Where Kurtz is an obsidian looking-glass, reflecting the sins of the father. The darkness lit by a spark of hope. The hope that we can change. Richter`s score(s) underlines this lonely expedition to who knows where – the kind that can only be undertaken with some degree of optimism. It`s interesting because the new music plays almost like a deconstruction of the two existing pieces. From Tuesday – itself classic Richter – like an epic expansion of his deeply moving Sarajevo – piano keys are treated, stretched thin. Drones made to run in parallel to slowly bowed strings. Cosmic choirs of ethereal angels sing wordless hymns and requiems. Siren-like serenades to the wandering son. Ligeti-like allusions to Ulysses` odyssey. His sailing beyond the sunset. Or Aeneas` travels to the underworld. Across the River Acheron, to speak with his own father, before returning to the living, and building Rome.

From Frahm`s Says there`s the trappings of techno. Racing, but beatless, arpeggios whose counterpoint owes as much to Jeff Mills as Steve Reich, or Wim Mertens. Hypnotic, rushing, rave sequences. Devoid of drums but not drama. Orchestras augmented by machines. Buzzing, humming, pumping. Clanking, turning. Creating a bubbling kosmische that wouldn’t be out of place in the catalogue of Klaus Schulze`s Innovative Communication imprint, or Pete Namlook`s label, Fax .

In between both there is noise. Blasts of alien horns. Crashing meteor-like storms. Metallic screams. Sawing Psycho strings. Rumbling leviathan-like bottom end. Emitting intense anxious, menacing, warnings that recall Mica Levi’s score for Under The Skin, and are constructed in part from transmissions received from NASA probes, Voyagers 1 & 2. Messages sent back from these unmanned adventures, from Saturn and Jupiter. Data collected on their own forty-two years and counting journey to the stars. Interludes of calm follow these rattling bursts of intensity. Gymnopedies and Frank Comstock-like aural depictions of space. Childhood music-box chimes. Sad almost silence. Falling back to an emptiness. A mix of terror, awe and beauty.

There`s a key scene, for me at least – and yeah I`ll give the whole film away – where Tommy Lee Jones` – whose character has spent over two decades lost, looking for extra-terrestrial intelligent life – says, “You can`t let me fail”. To which Brad Pitt replies, “Dad, you haven’t. Now we know we’re all we’ve got”.

Some people will always be searching. Always be questioning. Too busy thinking to see what they have. When thinking for most – weighed down by the everyday, by worry – is a luxury. Off on a quest to the end of everything. Looking for answers, for a reason “why?”A quest born out of despair maybe, but driven by hope. Charles Marlow, Captain Willard, Roy McBride. On a mission to face this dark mirror, all that is wrong in ourselves. To try to apply a little “black box theory”. To learn from our mistakes. Not repeat them. God, if that isn’t the goal.

You can purchase a copy of Ad Astra directly from Deutsche Grammophon.

The new poster art work is by the amazing Greg Ruth and available to buy from the wonderful Mondo. 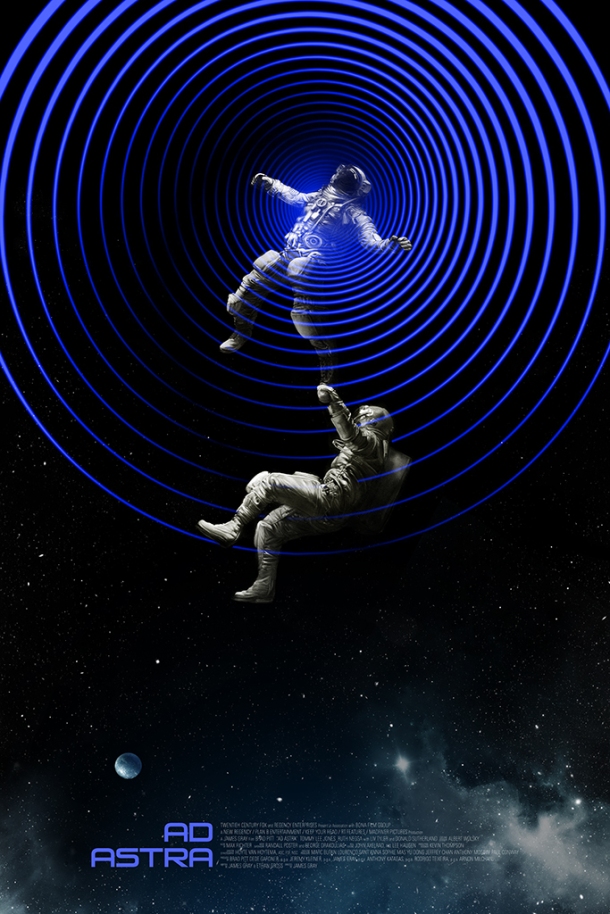 *We don’t get too many foreign films shown out here in the Japanese sticks. Sure, I can take the kids to see The Avengers, or Jumanji. But even they’re dubbed. More adult fare from the UK and US (Europe? forget it) is left in its mother tongue but it is thin on the ground, and sometimes appears years after its western release. Oscar nominations often bring in one or two. I got to see Moonlight and The Shape Of Water, but there was no Green Book, or Blackkklansman. The English language screenings are usually late at night, or first thing in the morning. So the routine is drop the kids off at school at 8:30 and wait for the cinema to open at 9:00. All the while hoping that the dog doesn’t decide to destroy or soil the house in my absence. Obviously the screenings are pretty empty. Maybe one or two senior citizens, who get a discount. So I make the effort to go watch everything. For fear that they might stop altogether. My current favourite daydream is opening a local art house. A cross between the gilt and velvet of Leeds` Hyde Park, and the buzz of Kings Cross` Scala.

**Has cinema finally eaten itself. Is everything now a “cine-literate” collage of homage?

The Tree Of Life