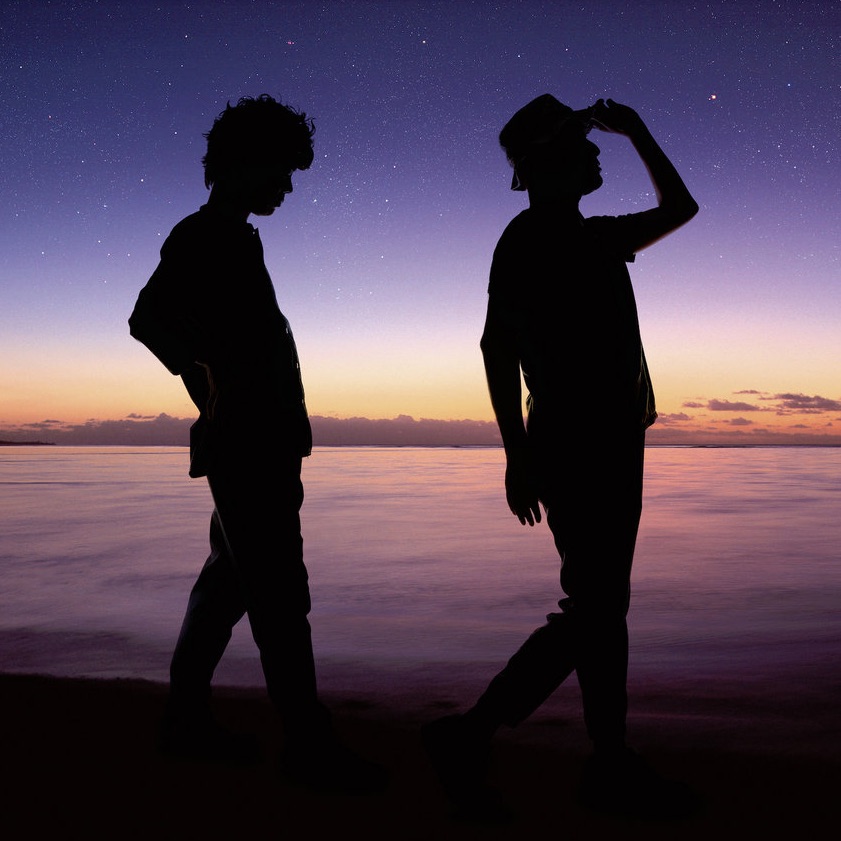 Coastlines arrived at the end of 2018 with a 45 on Eitetsu Takamiya`s Flower Records. One side of this single, a cover of Ralph McDonald`s East Dry River, is featured on our Oto No Wa compilation, released later week. They subsequently recorded an album, which is about to get a global vinyl pressing care of Be With Records. Last Friday the duo also announced a two new recordings, East Coast / West Coast. The former a jazz of piano ripples and damn funky drums. The slower, skanking, latter, a tropic of Brazilian percussion and fretless bass runs. Underpinned by a booming electronic bottom end, and topped off with ethereal sighs and bossa nova picking.

For those in the West, Coastlines might have appeared to come out of nowhere. But both Takumi Kaneko and Masanori Ikeda have long musical careers that take in stints in London and America. I interviewed Masanori a while back. But with all this activity it seemed the perfect time to have a chat with both of them.

Masanori we’ve spoken before but Takumi can you tell me a little about your background?

I started attending a music school at the age of four, and after graduating from a Japanese music college, I went to study at a music school in Boston, USA. When I returned to Japan I joined a hip-hop band, called Loop Junktion, and I`ve also been playing with Cro-Magnon since 2004.

I studied in Boston for about three years, and traveled to New York a few times to check out the scene there.

Can you tell me a little more about Cro-Magnon?

Cro-Magnon met in Boston. We all attended The Berklee College of Music. I first met the other two members, Shigekazu Otake (Drums) and Tsuyoshi Kosuga (Guitar & Bass) when I was hired to play a session with them at a studio off campus.

Masanori you’ve been releasing music on Flower Records for quite a while. How did you first meet Takamiya-san?

I think we were both DJing somewhere or other. It was such a long time ago, I’m not really sure…but I think the first time we worked together was when I was recording as Mansfield. I was making this track called Love You More, and it featured Minako Okuyam who is the vocalist with Takamiya’s brother’s band, Reggae Disco Rockers. Takamiya was the recording engineer. Since then our relationship has got a lot deeper.

How did the two of you meet – Masanori and Takumi?

Masanori: Basically through Cro-Magnon. Sigekazu Otake was my neighbour, and used to pop round to my flat all the time. Tuyoshi Kosuga was another friend, and I ended up doing DJ support for the band, many many times.

How long did it take to complete your first album?

Some of bits of it were made a long time ago. We`d been working together on music for commercial video projects, and we had a lot of unused demos. Maybe 2 tracks came from that archive – reworked and rearranged for the album. But most of the music was made after the release of the first E.P. …so between early autumn 2018 the end of spring 2019…around 6 months? To be honest, we`d been experimenting and moving in this direction for a few years.

Where was it recorded?

Mostly chilling at both of our flats with Takumi’s new baby..She is an angel! We did the final mixdown and mastering at Flower Records studio with Takamiya.

I know that the music of Coastlines is partly influenced library music. Do you have a favourite library album, artist, or piece?

But there are many more.

You cover Azymuth on the LP, and Takumi-san I’ve also seen Cro-Magnon do an amazing version of Jazz Carnival live. Are Azymuth a big influence on Coastlines? Again, do you have a favourite Azimuth album or track?

Takumi: When I was kid, every night, I`d listen to this radio show called Crossover Eleven. The show was kind of Japan’s equivalent of “Quiet Storm”, and it was on NHK – a bit like the Japanese BBC. The show`s opening track was always Azymuth`s Vôo Sobre O Horizonte, and its closing track was always their Outubro. I didn’t know who Azymuth were at the time, but every night through my childhood I heard these tracks.

When is the new single out?

Are you working on an album?

Of course! We’re not sure yet when it will be ready, but we’ve been working on it since completing the first album. It’s always fun doing the Coastlines recordings.

Do you have any live gigs coming up?

On the 4th of April we’ll play at the Lone Star launch party for the compilation album Oto No Wa – at Bonobo in Harajuku. Then this summer we have the Shin-Ha Festival in Miyagi. We’re really looking forward to that!

Coastlines eponymous debut LP is available on vinyl from Be With Records. Their new single East Coast / West Coast comes care of Flower Records. Oto No Wa will be released on Music For Dreams on March 27th.