Still running with the idea of “Funky Alternatives” here’s an extract from a recent conversation I had with Sal Principato. Sal should need no introduction – a pioneer with a pedigree that includes Liquid Liquid, Fist Of Facts, Bison, to be honest too many collaborations to conveniently count here. The excerpt `s focussed on the production of a certified post-punk dance floor classic, Liquid Liquid`s Optimo E.P. A record released in the summer of 1983 on legendary New York independent label, 99 Records – run by the equally legendary Ed Balhman and Gina Franklyn. Ed came from Brooklyn. Gina was British. The store – pronounced “nine nine” and located at 99 MacDougal Street – opened in 1978. Initially it only sold clothes, but kind of mirroring London’s Rough Trade, it began to stock more and more independent records – specializing in punk, post-punk, and reggae. The shop became a hangout for local artists and musicians, such as Glen Branca, Vivien Goldman, Thurston Moore and Pat Place. In 1980 the shop launched the label, releasing music by these store regulars. Liquid Liquid`s Optimo E.P. – their second for 99 – sold a reputed 30, 000 copies before one of its tracks, Cavern, was bitten wholesale by Grandmaster Flash and The Furious Five for their world-wide chart smash, White Lines.

Prior to signing to 99, did you hang out at the store? Did you know Gina and Ed socially?

Sure. We shopped at 99 Records. We were in awe of 99. That’s why we dropped off our demo tape there. When Ed said he liked it and asked “Can I see you perform?” We responded with “Can you get us a gig?”

Before 99 opened did you shop at Bleecker Bobs?

I don’t recall the timeline, but we did indeed Bleecker Bobs on W. 3rd St. He stocked many of the records we were interested in, and discovered many others – but 99 Records took it to another level.

Glen Branca gives the impression that Bob was a bit sleazy. Was this the case?

I didn’t notice either way. He was a little crotchety – but a lot of old school New Yorkers were like that at the time. 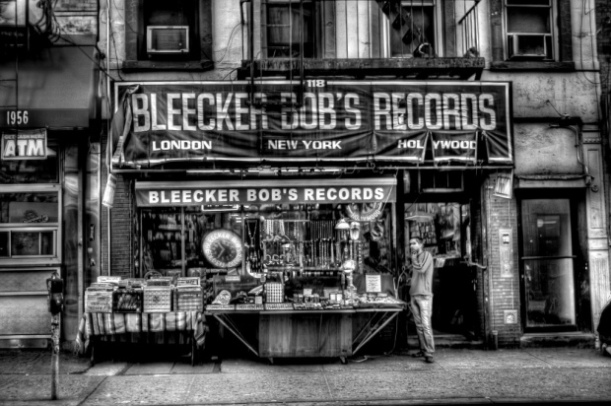 Were you friends with 99`s other “famous” customers – Glen Branca, Thurston Moore – or the other bands on the label, like Cynthia (Sley) and Pat (Place) from Bush Tetras?

Glen helped facilitate our relationship with Ed and 99. It wasn’t a huge scene so we crossed paths with everyone – and we were fans of their work – but in general we were self contained, and focused on what we wanted to specifically express and accomplish.

Did the bands on 99 ever play  / perform together?

Ed Bahlman managed two bands – ESG and Liquid Liquid – so periodically we would perform together. Also we hung and performed with the Konk guys. Al Diaz and Shannon Dawson played on some of our tracks.

When and where was the Optimo E.P. recorded?

The Optimo E.P. was recorded in 1982 in a studio on the top floor of Radio City Music Hall – if my memory serves me well. It was the former WNBC radio broadcast studio. It was an amazing room. We tried to integrate the various sound effect props left behind from those radio broadcasts. For instance there was a door in a door frame that we slammed at the end of Out. The engineer, Don Hunerberg, spliced, diced and arranged the recording tape – making piles and piles on the floor. It was a sight to see. Old school cut and tape the tape – as opposed to digitally click, cut and paste.

Who were the personnel?

The band at that point were Scott Hartley on drums, Richard McGuire on bass, Dennis Young on marimba, and myself on vocals. All of us on assorted percussion. Don Hunerberg was the engineer, and Ed was producing the session. Ed produced, and paid for, all of our records.

What equipment did you have?

Lots of percussion, marimba, bongos, drums, bass – and anything else we could get our hands on, including a Pro-1 analogue synth. I had this delay / reverb unit called a Stage Echo,  which I used when we performed live. I guess it was too noisy to use for recording – so we simply tried to mimic it’s effect in the studio.

How long did the sessions last?

I don’t really remember how long the session went on for but I’m pretty sure it was fairly short and sweet, because we were very fluid at the time. No pun intended.

One of my best memories from that session was when Dennis and I took the freight elevator to go pick up lunch for everyone and half way down a whole lotta Rockettes came aboard. It was like being in a forest of really long legs and feathers.

Did the tracks emerge from jams, or were they already written?

Both. Sometimes a “song” didn’t emerge until we went into the studio to record  – expanding upon a groove that we`d come up with, and then editing it down. That was true with Cavern. We recorded I guess like a 12-minute amorphous version of it. Eventually it was refined into something good enough to be released. I believe Optimo was pretty much intact when we recorded it. But certain flourishes were created in the moment – like the backward cowbell in the beginning.

What would come first? lyrics, rhythm or bass-line?

None of them. It was an organic coming together of the elements. If one instrument expressed itself confidently, then the rest of us would follow it’s lead – but generally we’d work a groove until something emerged. That said often drums and bass would be the anchor.

Where did “slipping in and out of phenomenon come from”? What does it mean?

That’s life no? A combination of inspired, effortless movements – along with pedestrian, work-a-day sometimes futile efforts. Both are instructive and make us who we are.

Can you remember Richard coming up with the Cavern bass-line? Did you know you were onto something big when you heard it?

Cavern was a process, so there wasn’t any ah-ha moment – if I’m not mistaken and perhaps Richard might disagree or not remember. He thought the bass line was boring because it was only two notes. It goes to show that it’s more about approach and feel and not necessarily sequence.

Ed worked and re-worked various mixes of Cavern. He would give the acetates to his brother Bill, who DJ’d at a spot in the West Village, to measure which parts the audience responded to. After it was released he got it played on WBLS and WKTU. That’s probably where Sugarhill heard it – or perhaps it was at the Paradise Garage, Funhouse, Danceteria, Club Zanzibar, or any other venue Cavern was played at before the release of White Lines.

Were any other tracks recorded in the sessions, other than the four on the E.P.

There was Sank Into The Chair – an uptempo nugget that was released as a bonus track on the Domino Records reissue. Also there was an extended improv groove that`s sitting somewhere in the vault.

How did you first learn about White Lines?

On a Sunday afternoon during a free concert in Tompkins Square Park an acquaintance came up to me and asked “Did you hear the new Grandmaster and Furious Five jam”? I said, “No I haven’t”. They replied “It sounds like Liquid Liquid”, and I’m like well…what does that mean? – considering that we used to joke about someone trying to do a cover version of a Liquid Liquid song – but there it was….the bass, the drum, the vocal melody…

If you’d like to learn more about 99 Records do yourself a favor and check Amar Ediriwira`s incredible article, first published in Tuba Frenzy #4, and available on-line via Vinyl Factory.