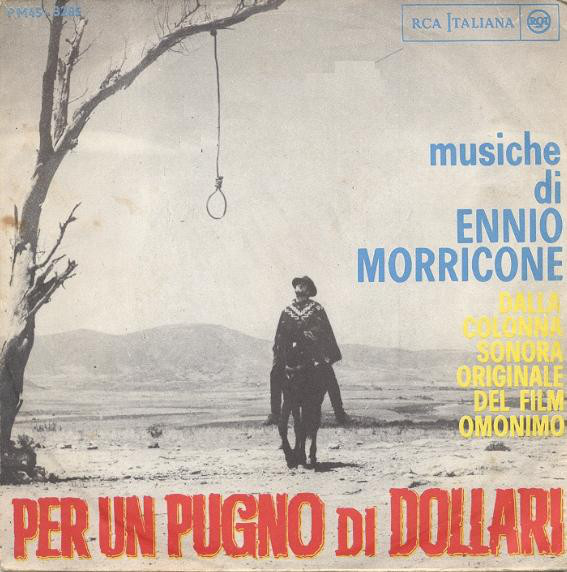 Before music, it was film that I was obsessed with. I was a bookish kid. I`d spend my spare time reading Guinness` World Records, encyclopedias, and the dictionary. Memorizing useless facts and learning new words. Poring over borrowed library biographies and tomes of movie history. Initially I was into horror. I`d cajole my mum into letting me stay up way past bedtime whenever a something was on TV. Usually embarrassing the both of us, because this was the `70s and studios always seemed to squeeze in some female nudity, and a lesbian vampire sex scene. Similarly the “fan” magazines I attempted to collect – Monster Mag – which folded out into a poster, House Of Hammer – were usually stocked on the newsagent`s top shelf. But along with the lycanthropes, living dead, and gender-fluid creatures of the night, there were Spaghetti Westerns. By the time I was 10 or 11 I could reel off titles, alternate titles, release dates, actors, directors, plot-lines, spin-offs and sequels – like a cross between Wikipedia and The Village Of The Damned. My teachers were freaked. “Spaghetti” was a school of film “auteured” on shoe-strings by directors such as Tonino Valeri, Duccio Tessari, Sergio Sollima, Sergio Corbucci, and Sergio Leone. The movies of Leone in particular had a huge impact on me as a kid, and an essential part of those films is the music of Ennio Morricone.

Leone would commission Morricone`s iconic scores before shooting was even set, and have his compositions play while the actors performed, informing their take. The music also determining when Leone would shout “Cut!” – so not just dictating the mood, but the pace of the film. Budgetary constraints meant that Morricone was forced to improvise – pulling in sound effects, gunshots and whip cracks, coyote calls, and resorting to juice harp and electric guitar, fuzzed tone and tremolo twang*, instead of a full orchestra. Drawing on his experience as a player in the avant garde collective, Gruppo di Improvvisazione Nuova Consonanza. Leone’s first Western, A Fistful Of Dollars, Per Un Pugno Di Dollari, was allegedly a rip of Akira Kurosawa`s ronin / jidaigeki masterpiece, Yojimbo, but it also took inspiration from Dashiell Hammett`s detective novel, Red Harvest. It was this mix of samurai code and existential noir, that as an impressionable wimp, had me hooked. South London in the 1970s was a pretty violent place. Where I grew up was a den of thieves. Primed by Leone and Morricone I now believed that there was honor among them. That like Clint they were anti-heroes capable of cruelty, and driven by greed, but also underdogs, lone wolves, who saved their worst for bullies, wrong-doers, and revenge. Morricone`s music would play – oh man, those chimes from For A Few Dollars More – and I`d be out in the Tabernas Desert, while it doubled for Mexico, in a stand-off with my troubles – whose faces constantly, continued to change. A fantasized life flashing before me, as I assumed the role of a hero in my head. Those chimes still do that now.

It`s crazy but this is where my ideas of right and wrong came from. My morals. The twisted loyalty between The Good and The Ugly – Blondie and Tuco. The camaraderie that had “uomo senza nome” arrive in the nick of with that second pocket watch to shorten Colonel Mortimer`s odds. This is still very much who I am. I`m also certain that Morricone`s scores are where my love of flamenco, and even Miles` Sketches Of Spain, stems from. Mariachi brass bands blow romantic doomed ballads for unshaven ruffians seeking retribution, redemption and / or a noble death. Soprano sirens** tempt with tales of the ecstasy of gold to chest-beating timpani, sinew stirring, blood summoning, military snares. Church bells toll, and a harmonica makes like a lonesome train. All building to a burst of operatic violence, and the diabolical desperado buying a one-way ticket to Boot Hill. Credits rolling to the jaunty whistle of The Man With No Name.

But Leone and Morricone didn’t only do Westerns. Leone’s last film, Once Upon A Time In America, follows Harry Grey`s Manhattan Lower East Side Hoods through friendship, love, lust, and betrayal, in a tragedy of Greek epic proportions. It has to be the saddest gangster movie ever made. Morricone`s musical themes passing between aural paintings of beauty pirouetting on a pedestal – out of reach – with a grace that men would steal, and a dark nostalgia, of regret, of living with guilt and sin. Romanian pan flute fueled remembrances that seem to prod somewhere within us ancient and primal. The melodies like songs we already know. Legends, myths, handed down.

Morricone played jazz in the `40s. In the `60s he wrote pop hits for stars such as Paul Anka and Mina. In the `70s he did disco, funk, and psychedelia. His soundtracks though often hark after the `20s – a time before “The Talkies”. When music had to take the place of words. Where lonely solos intro understated strings. Minor chord swells that mirror pent up emotions, up on the screen. These rising from quiet choruses to floodgate-opening fanfares. He might be best known for hymns of hindsight, for the fallen, the faithless, unfaithful. Ghost towns and gunfights. Dynamite, revolution and the disasters of war. Missions, Moscow farewells, and Manage a trois. Broken promises and an `80s arthouse heartbreak – which went hand-in-hand with my own. But Morricone`s music also offered hope and forgiveness. Harpsichords, accordions, tangos and waltzes. Blue finally breaking cloud. Memories of young love in the spring, dancing to piano-led bossa-influenced swing. Finales of heroes and heroines riding off into new horizons, new beginnings. Ennio Morricone was, and will always remain, central to cinema`s magic.

*the guitar was played by Morricone`s childhood friend and fellow composer Alessandro Alessandrani – who also provided the whistles.

**the soprano was Edda Dell`Orso of Cantori Moderni