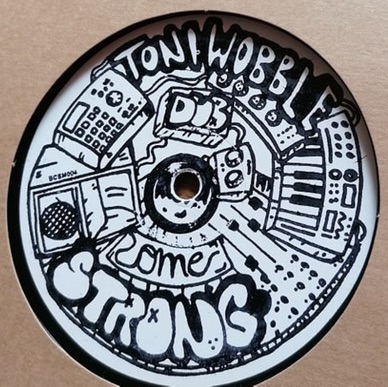 A couple of Jah Shaka favourites have been reissued…..First up is Black Ark Players` Guidance…as in “Jah Jah give us…..” With a gut-wrenching guitar lick and groundation  rhythm this is a top top tune lifted from the Black Ark In Dub LP. A Lee Perry mixed rarity that was originally released in 1980, on Black Ark International. This was like a dub holy grail, until 17 North Parade reissued it late last year. The label, an off-shoot of VP, which was founded by Vincent “Randy” Chin, father of legendary producer, Clive Chin – its name celebrating the address of the Chin`s fabled Kingston studio and store, Randy`s Record Mart. They’ve now also pressed Guidance up as 12 for Record Store Day.

Another Shaka sought after is Keith Hudson’s Felt We Felt The Strain, originally released on a Greensleeves 12 in 1979. Featuring Hudson’s impassioned idiosyncratic pleas – his voice always on the point of breaking – and his similarly characteristic dense,  complex, Studio Kinda Cloudy, production, this is a song all about sticking to ones ideals and beliefs in the face of persecution and adversity. “Never change Me”.

Greensleeves have another essential in the form of Wayne Wade`s Poor And Humble, which is paired on the same 12 with Bunny Lie Lie`s Babylonian. Dating from 1981, produced by Linval Thompson, powered by the mighty Roots Radics, and mixed by Scientist at King Tubby`s, this sound shaped my youth. Both of these Greensleeves records mentioned arrive in repros of the classic, iconic, Tony McDermott sleeves.

Another “double-hitter” came from Soul Jazz who put Wailing Souls` heavy Run My People – from The band’s 1975 self-titled debut – together with the lighter, loved-up, Troublemaker – from their repackaged 1982 collection, Soul & Power. Two vintage Studio 1 cuts, produced by Clement “Coxsone” Dodd, the former is funky organ fired – “Babylon a come” – while the latter weaves a woodwind in and out of its tale of a runaround heartbreaker.

On to a few 45s, and Swiss label, Reggae Fever have KC White`s No No No – his self-produced take on Dawn Penn`s 1967 Studio 1 hit, You Don’t Love Me (itself based on Willie Cobbs` blues, You Don’t Care – recorded for Ruler in 1961). KC`s is possibly a bit deeper, dread-er, than Dawn’s cut.

Freddie McKay`s Bring Back The Good Old Days on Alvin Ranglin-associated Typhoon is a super rare, and bad, bad tune – originally recorded and released sometime in the second half of the 70s. Despite its title, its not really a song of nostalgia – more a shout out against violence and inequality, and a call for universal love, and understanding. When Freddie sings “Too much of one thing, good for nothing” – a pro-diversity couplet worthy of Prince – it sends a shiver up and down my spine. This is back out there again, for relative pennies, thanks to Jah Fingers.

There’s more Lee Perry in the shape of Keith Rowe`s Groovy Situation, on a new Upsetter 7 – again via Reggae Fever. A song penned by Rowe, who also produced a version by Audrey Hall for his own Kebar imprint in 1976 (this take was recently reissued by Horus Records). Scratch`s version, dating from a year later, and released on Black Swan – through Island Records – is stoned to say the least. The keys reduced to a clipped squeak – a mere suggestion of the melody. Even the “Vocal” mix is subjected to seismic dub drop-outs.

Another Upsetter production, and a pretty bonkers one at that, is Seskain Molenga & Kalo Kawongolo`s Roots From The Congo. An album originally recorded at Perry`s Black Ark in 1977 and released in 1979 on Parisian label, Sonafric. It`s been been reissued twice this year – by Roots Vibration and now Antarctica Starts Here (a Superior Viaduct spin-off). The record`s barmy-ness maybe best exemplified by the track Bad Food. An ode to food poisoning set to a soca / calypso lilt, full of insane “croaking lizard” outbursts, and packed with percussion. Like an indoor firework display planned and conducted by a pyromanic with a box of dynamite. I picked up the Roots Vibration version – which has extensive sleeve notes by Perry / reggae expert David Katz, that, in great detail, describe the equally mad story behind the album’s recording.

Roots Vibration have also repressed Aimann Raad`s In My Country. A piece of treasure from 2011, licensed from French imprint Original Dub Sound. For me it`s all about the melodica cut by Gianni “Jacin” Cubeddu. The West African producer doing a damn fine job of updating Augustus Pablo`s Far East sound.

Representing Leipzig`s Plug Dub Soundsystem Toni Wobble turns out the Dub Come Strong E.P. for Basscomesaveme. Minimal and quite possibly influenced by Basic Channel`s Rhythm & Sound, Like A Fish, manipulates a vintage vocal hook and filters alternating sped-up / slowed effects in, out, and upside down of the bass and drums. The mysterious Señor C offering a brass-ier shot, intro`d by a classic piece of Bruce Lee. “Be like water my friend…”

Veteran and journeyed Italian producer Daniele Gaudi has a new album out, celebrating 100 Years Of The Theremin, on Dubmission Records. The collection compiles collaborations with an all-star cast, featuring luminaries such as Prince Fatty, The Scientist, and the legendary Dennis Bovell. The “quirky” theremin throughout gives everything the air of Dr Pablo paying tribute to the BBC Radiophonic Workshop and their Dr Who theme, and for me at least this works best in the hands of Neil “Mad Professor” Fraser and ON-U`s Adrian Sherwood. Adrian in particular taking the already far-out sounds and beaming them off to Bebe & Louis Barron`s Forbidden Planet.

While we’re on the Mad Professor, Record Store Day, in Japan at least, saw the “drop” of two 45s jammed with classic Ariwa lovers rock. My pick of these paired Black Majik`s Feelings Killing Me with Yona`s Could It Be I`m Falling In Love. Both super smoothly edited by DJ Holiday.

While we’re on Adrian Sherwood, his daughter, Denise, shared a teaser from her forthcoming This Road LP. Let Me In being a blues-y, Bristolian, St. Paul’s soundsystem heavy beat driven thing. Scratches and story-telling, cinematic strings, and melancholy violin. Bashed together in a red-eyed – weed, tears or both – Portishead vs. Tricky stylee. The second-half of the tune transforming into the kind of Satie-lost-in-bass – showing off a crazy separation of sound – that Denise`s dad does so so well.