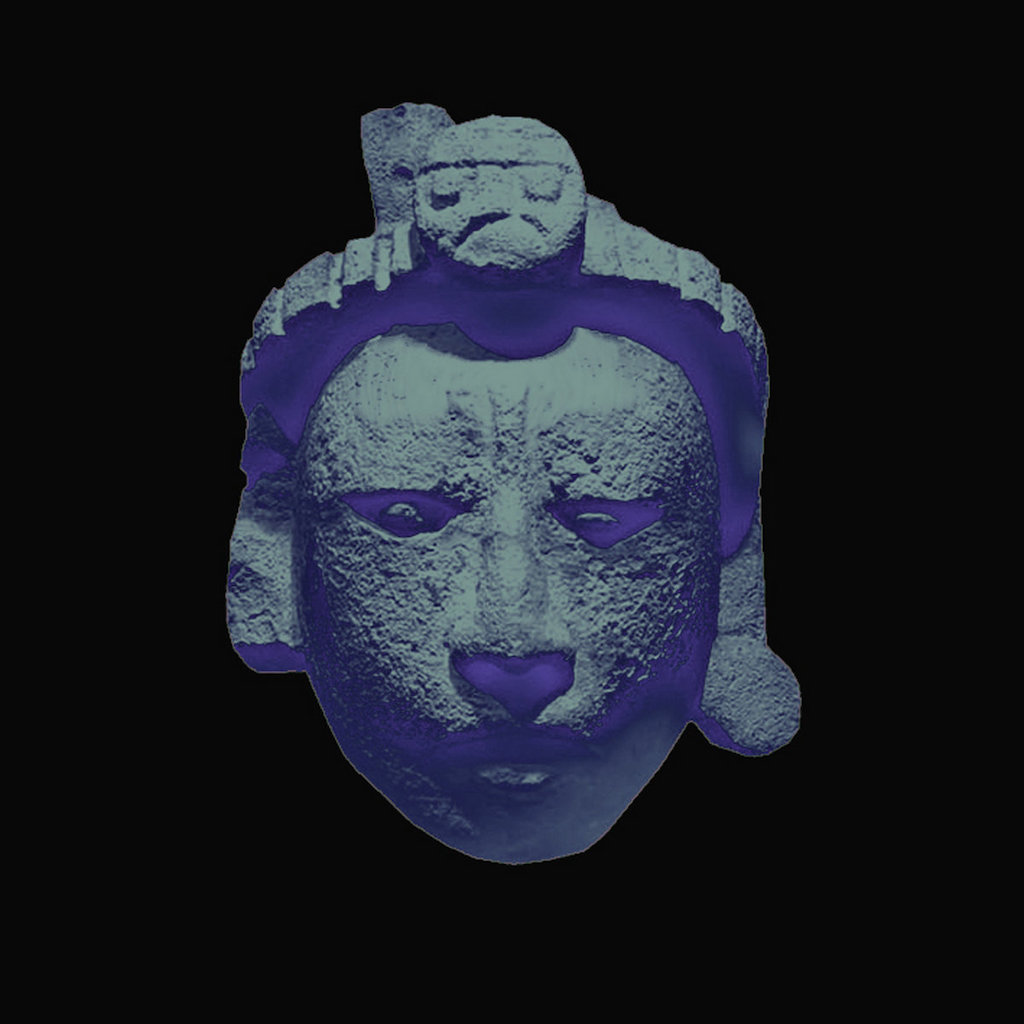 The first I knew of Athens-based Aggelos Baltas and his Anatolian Weapons project was when Khidja remixed the EBM Ethno-Techno of his Strange Light From The East into a spiritual jazz-enlightened dub-disco epic. Then there was his dynamite digital only release, Black Sea. A set of throbbing, acidic, 100BPM chuggers, for Lurid Records, whose sampled vocals highlighted the history and the on-going plight of Greece`s refugee population – where he donated all proceeds to the Humanity Crew charity. His To The Mother Of Gods long-player, for Beats In Space, found Aggelos collaborating with folk musician Serios Savvaidis. The pair producing an album of drone-soaked psyche, which further explored the musical roots of their homeland. A psychedelic journey full of zithers and other ancient strange-stringed things. Aggelos` latest vinyl release is Ela – a track recorded for  Martin Lefteri`s new Feel The Drive imprint – which finds him fusing these tradition sounds to dark dance electronics.

Born and bred in Athens.

How did you start making music?

What inspired you to start?

My parents I guess – by having a lot of music and instruments around the house.

What instruments can you play?

None. I’ve no formal training, but I can make a musical sound with almost anything.

It was a vehicle to dive deeper into traditional music – not only locally, but the broader spectrum that my region provides. That means music from Asia minor, Turkish stuff, songs from Southern Italy, and a lot of song from Northern Greece – such as music from Epirus, which moves me deeply.

Is it attempting to keep traditional music alive – by updating it?

It could certainly work this way, yes.

Is the project a kind of extension, natural progression of, your edits as Fantastikoi Hxoi?

A progression I’d say. Fantastikoi Hxoi had a more krautrock /space rock orientation – sampling folk and pop in a quirky way. Something that that appealed to DJs like Lena Willikens, in her early days. Most stuff I do is psychedelic and leftfield naturally, as I’ve always gravitated towards these categories.

Can you tell me more about what Anatolian means? My definition, unfortunately, is currently limited to what it says on Wikipedia.

Beyond the geographical regions, Greece is deeply influenced by Turkish culture. Also Anatolia evokes a kind of mysticism which is very charming to me.

You were making house and techno under the alias Dream Weapons. What brought about the tempo change?

I still make house, techno, acid and EBM, but they all now end up under one moniker. I still haven’t decided if I want to keep so many SoundCloud pages and email accounts. We have a record right now coming out on Marguerite which is EBM, a collaboration with Daniel Holt, whose musicality I really admire. So yes, ideally my listeners would be into as many genres of music as I am. Meaning if I mix a disco or Italo record into acid they would still move. But there are great DJs who paved the way for this: I-F, Intergalactic Gary, Hunee, Antal. I love DJing. I try to work hard and I love playing across the board.

What equipment are you currently using?

This is a secret.

Pre-lockdown did you perform live? If not is this something at you plan to do?

I had one hour of live techno which I used to perform at Astron Bar and a few local festivals, about five years ago. But it’s boring to hear the same tunes you yourself made, again and again. So I decided to put more weight to DJing, digging more, editing, doing a lot of podcasts and playing as many shows as I could. I want to be considered a DJ who takes DJing seriously, as well as a seasoned producer.

Prior to the pandemic did you have any regular gigs or residencies?

My residencies are Astron Bar – one of the first bars to play electronic music in Athens. Its still going strong and has hosted also numerous international DJs despite its small size. I like small spaces. I dislike DJs on big festival stages. 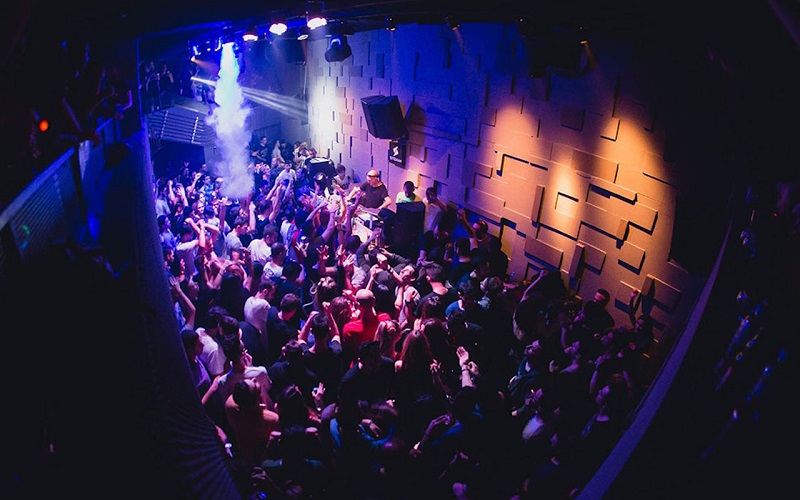 My second residency is the excellent Bios Terrace, another place in Athens which has been there since forever and has done a lot for the scene. Also Romantso, Bios’ little sister. Both places are alternative and always interesting, so if you are visiting I strongly recommend them, they are key places in the city. 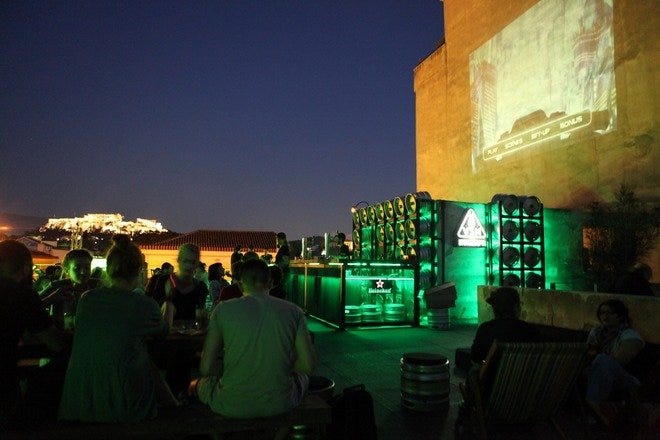 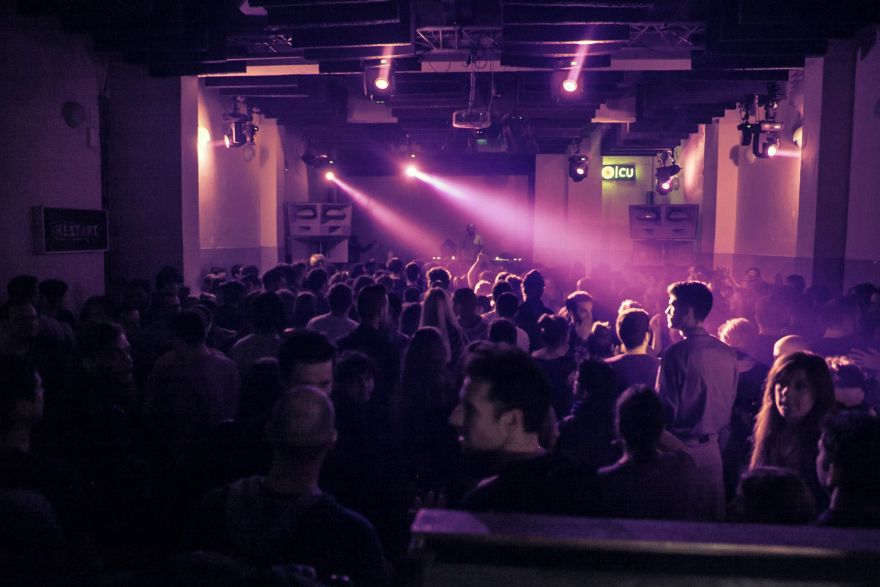 Is there a local “scene”?

I don’t know. There are a few dedicated heads. I have strong ties with the Phormix, label who have hosted people like Helena Hauff, Mick Wills, Intergalactic Gary, Traxx. Apart from that there is a small nucleus for every taste, as well as some exciting young blood. The scene is small for six million people I find, but exciting. We also have many musicians and artists from abroad, coming to stay permanently in Athens, so it will grow I hope.

Are there local bars, cafes, clubs that play similar sounds to those that you make?

The aforementioned ones would be my top preference. But the sound is appealing to more and more people, especially the slower stuff with world influences. There are a couple of more bars yes, Cantina Social, who are very good friends and have also been there a long time. Plus Cafe Ennea in Kolokotroni str. 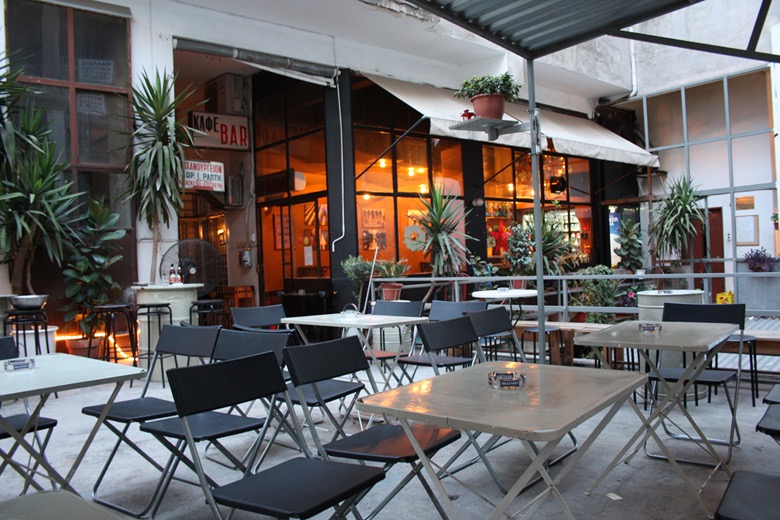 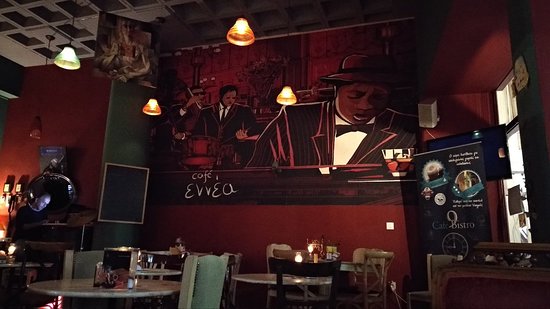 Are there other local artists making music that you rate?

My new music partner, Anna Vs June. We already have a compilation track on Invisible INC, she has a brand new personal record on Ayaz’ label Yalanci, and I just finished mixing her latest one, while doing a bit of additional production when needed. But we have a lot of joint material which should be hopefully ready soon, a few remixes from her album, too. She is a huge talent, with deep knowledge of traditional music, great musicality and an amazing voice. We are very lucky our paths have crossed.

When I met Alex from Lurid in Tokyo – around the time of that Khidja remix – he said he was moving to somewhere like Seattle to open a audiophile restuarant, are you still in touch with him?

I haven’t spoken to him in a while. I saw he built a totally self-sustainable home, off the grid. Alex is very dear to me although we haven’t hung out much, but I’ve known him for many years. I have a lot of respect and love for him.

I really love that Black Sea E.P. you did. Would you ever consider putting it out on vinyl?

Thank you, I hear that a lot these days when I get commissioned to do an E.P., and I’m starting to feel trapped! Anyway, you should ask Alex for that. Personally, I buy more digital stuff and a few tapes. But that said, I’ve been buying vinyl my whole life.

Are there any plans to do more with Beats In Space?

Why not? Tim and the RVNG guys I also respect and love deeply. They are very professional while being easy going as well. No stress at all. Everything was flawless. We should actually do more together now that you mention it, hah!

How long did the To The Mother Of Gods album take to produce?

A year – not working full time on it – but thinking full time about it. My best memory is listening to the rough mixes on headphones, in a certain Berlin park near my friend’s house after Camp Cosmic. The productive process took about six months, very slowly and with life getting in the way constantly.

How did you hook up with Martin Lefteri and Feel The Drive?

Facebook did the job, as many others. Pity FB is slowly fading away, I don’t like changing platforms. As for Martin, another ultra cool guy, flawless communication.

The rest of that E.P. is very italo influenced. Are you also a big Italo fan?

Yes! I love italo, mostly before 86, with a few exceptions. I like raw music with mistakes, weird arrangements and edge.

Do you know the other artists on the E.P.?

Personally, no. As names, yes.

Can you tell more about the Spiritual Guidance series you’ve been releasing digitally during the lockdown?

I first went clubbing at 15, and the music was Goa Trance. I instantly fell in love with it. I was going clubbing twice a week, and there were also an early evening parties. I was collecting this music heavily from 1995 till 99, until everything went prog and there was no psychedelia in it. I then gravitated towards the Australian scene, Ollie Olsen, Andrew Till and the Psy-Harmonics crew, who by then were playing space rock and other psychedelic music, but not trance. Also the Japanese scene, Comma records, Ubar Tmar who was releasing some mind blowing stuff at the time, and some Finnish stuff, also very weird and psychedelic.

The Spiritual Music series is a series of edits. Think of it like a series of white labels from a record shop. There are some big tunes that I included and reworked, which are now unknown to the current generation – some rare records, some original material – but mostly reworked Goa Trance. Also some EBM and New Wave, but I won’t give away too much. Heads know and people who will appreciate it will make me glad….And yes, you pay for it, as you would pay for the white label in the shop. I have put a lot of time, love and effort on it. I just hope I don’t get sued, haha. But most of the artists either don’t care, or they are actually happy that someone is playing their records after twenty years. I think the series will go on, I love making edits and reworks and I have quite a lot of favourites still in the stash! 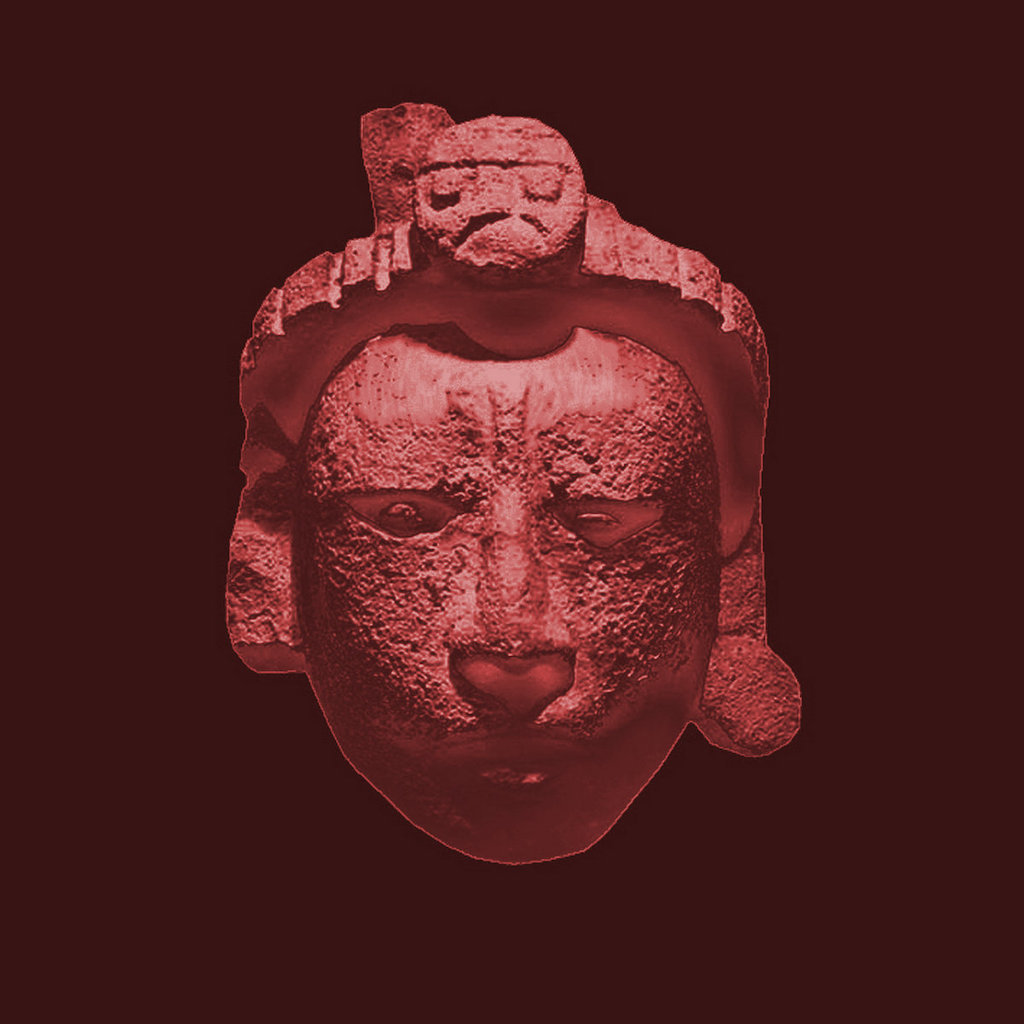 How did you hook up with Alexis Le Tan?

He made a SoundCloud recently and I accidentally fell upon it. I messaged him since I was a big library music fan and knew of his work on Space Oddities comp. Then we started emailing daily, mostly discussing Goa trance records, haha…He was a Goa DJ in his teens and later his Full Circle records made quite an impression on me – this music actually sounds quite deep at slow speeds, without losing any energy. So yeah, we went on from there and we are still in touch.

What`s the pandemic situation like in Greece at the moment?

I tend to not watch the news, but get informed by friends. People say we handled it well at the start. Personally I see a series of irrational measures – half realized – and right now things are closing up again. People are starting to lose their patience, and I’m afraid it will only get worse. But I tend to not think about it. No point in thinking about things you can’t change. I take all the measures and adjust my life accordingly.

With all the digital music you have available, has income from Bandcamp helped – more than usual – during this difficult time? Are Bandcamp purchases up?

Bandcamp has helped drain my wallet. It’s pasta and cheese since forever. Sometimes no cheese. Or no pasta. Jokes aside, I love Bandcamp and really can’t help myself even when I have no money to spend on music – not a very wise move – but one since I’ve been doing again since forever. But yes, It’s a great platform.

Can you tell me anything about the record you have lined-up with Byrd Out?

Stephen, another heart of gold. We have a few things lined up, some house records, some remixes. Great, great label, great guy, I love him dearly.

Do you have any more digital or physical releases lined-up?

Too many to mention! Compilation tracks, remixes, some commissions. I would say more than 25 in total. Working night and day and enjoying every minute of it.