Chillax are Isao Kumano and Kenichi Takagi. The two musicians are probably best known as members of acclaimed house / techno outfit, Tokyo Black Star – a trio that also includes DJ / producer Alex “From Tokyo” Prat. Kumano-san, however, also has a thriving mastering and sound design business, named PHONON, whose most publicly visible product is a range of superior quality, bespoke, headphones. Chillax began as a sort of secret side-project, allowing the pair to indulge their interest in analogue electronics and non-dance-floor-orientated musical exploration. The results remained completely unreleased until we convinced the duo to allow us to share the track Time And Space, on our 2020 Music For Dreams compilation, Oto No Wa. Recently, though Chillax have been “taking it to the stage” – performing a special “surround-sound” show at Koenji audiophile bar, Knock, and taking over Nagano`s Iizuna Oasis onsen resort. They are also scheduled to appear at the Galaxy – Gingakei, event, on December 4th, celebrating the release of Ayane Shino`s album, Sakura. This, together with rumours of a retrospective archival release on the cards, meant it was high time that I had a chat with Chillax.

Thank you to Ken Hidaka for translation assistance.

We are now based near the Kawasaki Tomei Highway exit.

I think it was around when we were in high school.

Which instruments can you play? Have you had any formal training?

KT: Kunitachi College Of Music. I play many instruments.

IK: I learned how to play the guitar when I was young, but now, I can`t remember any of it.

When did you first get interested in synthesizers and electronic music?

What was the first synth that you owned?

KT: According to Isao, I live with a wall of synthesizers.

IK: I mainly have mastering equipment.

Do you have a favourite piece of equipment?

How did you meet the other members of Tokyo Black Star?

IK: I met Alex while producing radio shows in the late `90s.  I`ve been friends with and making music with Kenichi since I was in my late teens.

When did you start making music as Chillax?

Around 10 years ago, I was suffering from insomnia and wanted to produce music to fall asleep to. I invited Kenichi to help me produce it and we made an album’s worth of material. It was never intended to be sold. We only gave it to a few friends.

How does the partnership work?

IK: I don’t feel that we each have our own specific roles, but it all starts with us going out to the Tama river to pick up stones.

We licensed a Chillax track for our Oto No Wa compilation. Are the any plans to release more Chillax material?

IK: Thank you very much. Thanks to you, we are talking with Alex about releasing the album that we made 10 years ago.

Have Chillax performed live before?

IK: We held our first initiation at Knock in Koenji. We also sold 5 of our Chillax stones as well there. 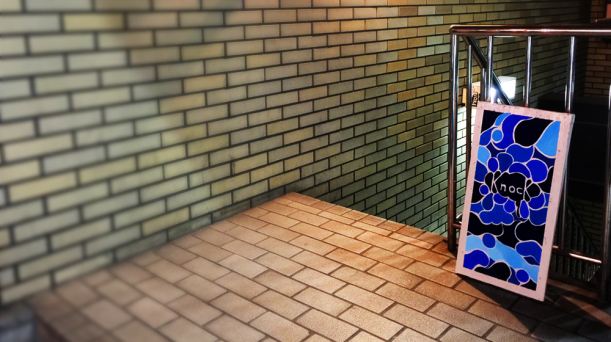 IK: It`s a small audio company. We became 11 years old this year. I am very happy that we have won a few international awards recently.

Can you tell me anything about Modular Ball?

IK: I received an offer to release some solo material from Damian of Rowtag, a French label who at the time, I was doing mastering for. I wasn`t interested in releasing any dance music, so I decided that since Alex was not around, I`d produce it with Kenichi. At the time, Kenichi’s studio was expanding, and it was invaded by a whole bunch of modular synthesizers – which freaked me out – so I decided to call this unit, Modular Ball to commemorate my surprise of what was happening.

Was the lockdown period creatively productive for you?

IK: I was also able to develop a few new PHONON products. 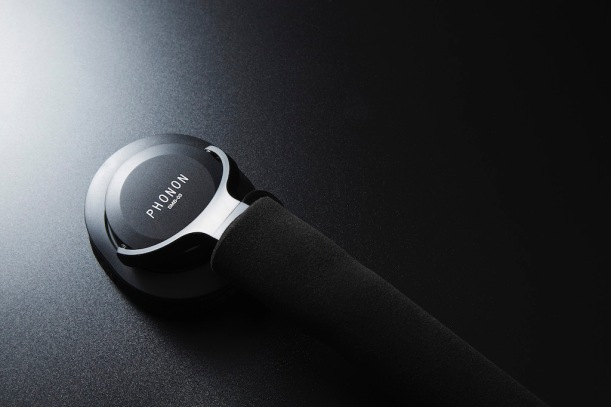 Are you working on any new music at the moment?

IK: Recently, we worked on a new Tokyo Black Star remix, while right now, we are preparing for our live performance.

In 2022 can we expect new music from Tokyo Black Star, Modular Ball, or Chillax?

IK: There will be a new Tokyo Black Star remix coming out soon. Chillax will working primarily as a live performing unit, but we might be able to release an album as well. As for Modular Ball, no plans at the moment.

Other than the event at Galaxy on December 4th, do you have any other gigs / performances scheduled?

IK: On November 21st, we held our second initiation at the IIzuna Oasis Healing and Sound Retreat, in the hinterlands of Nagano. Established by the late Fumio Miyashita, Japanese musician, music therapist, ambient music pioneer and ex-member of Far-East Family Band, it is considered a sanctuary for healing music.

Ayane Shino`s Sakura will be released globally by WRWTFWW / Mental Groove on November 26th. The launch event takes place at Tokyo gallery,  Galaxy – Gingakei, on December 4th. Legendary ambient innovators, Inoyamaland and Takashi Kokubo – who both gained global recognition via Light In The Attic`s Grammy-nominated, Kankyo Ongaku – will share the bill alongside Chillax. Renowned local DJ / Producer, Yakenohara, aka Unknown Me, will also perform, while Ayane-san takes the headline slot. The event will be open to a limited physical audience, and also available pay-per-view. The Lone Star crew are honoured to provide additional DJ support on the night, and also host the after-party at Bar Bonobo, in Harajuku. 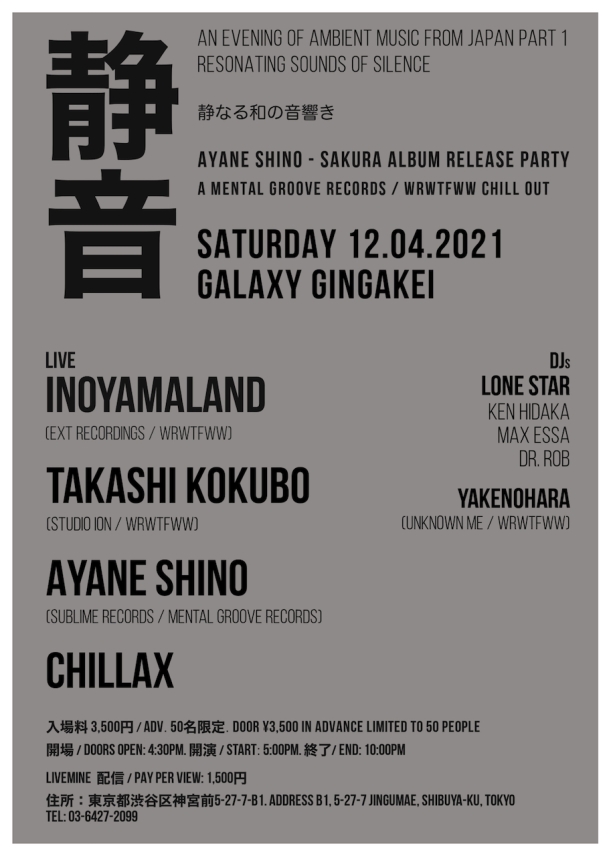 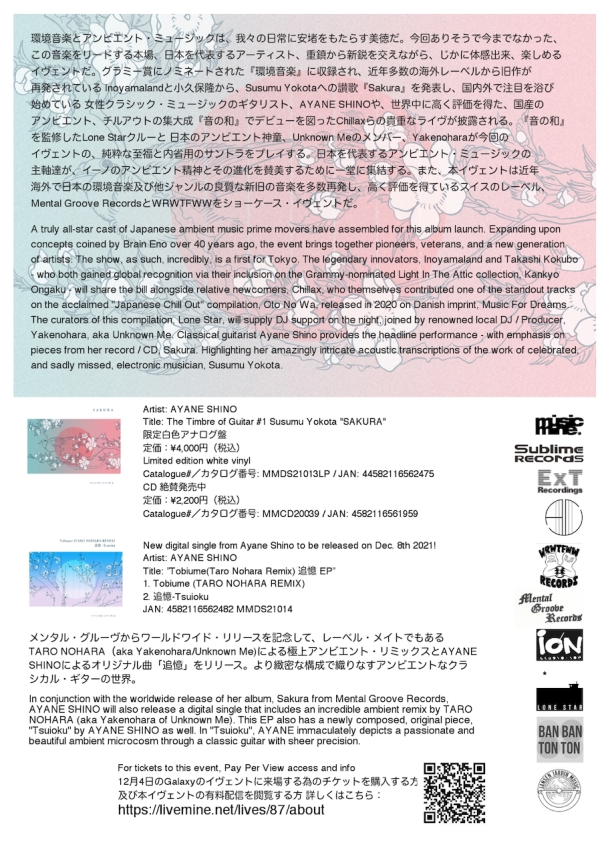 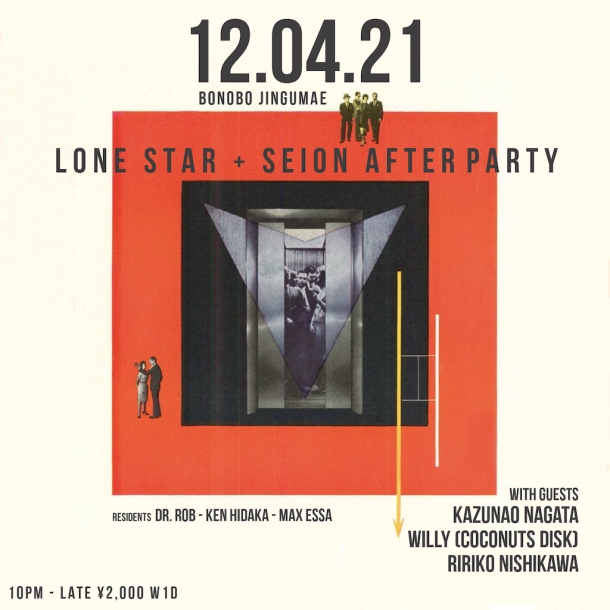