Apologies for the radio silence the last couple of weeks, been a tad busy…It’s now December. It’s dark at 4 PM. I have a roaring log fire going and I’m drinking a glass of stout, so this LP seemed to suite the mood perfectly… 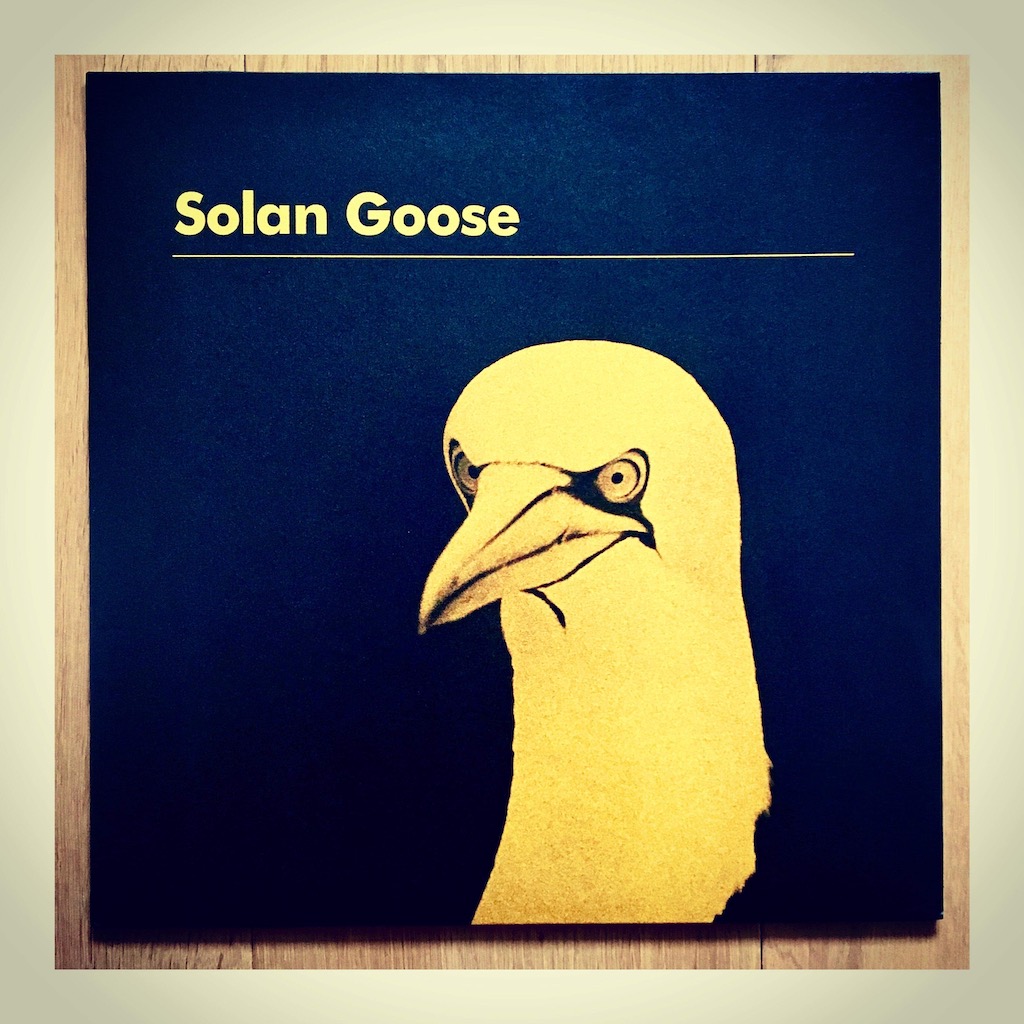 I bought this record after a tip from – I think – Jolyon Green. When I bought my copy, it was actually reduced in the sale, in the most excellent local Brighton record shop, Mr Bongo. This wasn`t long before Balearic Wife and I moved houses, so I hadn’t played it more than a couple of times before I had to begin boxing up my life, and, most importantly, records. I’ve thankfully made up for lost time since then, and it’s become a firm favourite.

Erland Cooper is a fellow Scotch, but in this case a supremely talented one. He hails from the remote Scottish Archipelago of Orkney and has also recorded with the bands The Magnetic North and Erland And The Carnival. This solo LP is the first in a triptych inspired by the natural world surrounding Orkney. The titles of the tracks on this are all Orcadian words for types of birds.

It’s a stunning LP. A beautiful atmospheric mix of piano, strings, subtle electronics, voices, and the odd field recording. The things it’s reminding me of most right now as I listen is something between The Penguin Café – Arthur Jeffes current incarnation – and Icelandic composer Olafur Arnalds.

Many years ago, my dear friend Moonboots made a series of mix CDs called The Four Seasons – subtitled, Music For Ironing – each one capturing the mood and feeling of a season of the year. My favourite of the four was Invierno (Winter), and the music on this LP would be completely at home on that mix.

Winter is coming, so wear a nice scarf.

There’s been a bit of a theme running through some of my posts about records this year… records released in 1971 – a year after me – that are turning 50. Here’s another that I couldn’t live without …

I’m not really sure where to start with what is pretty much a masterpiece. Not bad for a first proper attempt at an album anyway, of that much I’m certain.

Gil had already recorded and released an LP at this point, but it was primarily a vehicle for his poetry, and following the lead of The Last Poets contained only sparse percussive accompaniment. On this LP Gil, however, teams up with Brian Jackson for the first time, although it will be a couple of releases later before the albums are credited to both Gil and Brian. For me it’s the first installment in a decade long run of completely essential releases – this isn’t even my favourite! They’re more than ably assisted by Bernard Purdie on drums, Ron Carter on bass and Hubert Laws on flute and sax.

My copy is a UK original on Phillips Records – which admittedly I upgraded to sometime in the early `90s. My first copy was a ‘nice price’ reissue which I bought from HMV Brighton in summer 1989, and that’s significant, because for me, the running order is much better than on the original US release.

It kicks off with Lady Day And John Coltrane, which gives the LP a more optimistic, upbeat feel to begin with. Classics like Home Is Where The Hatred Is and The Revolution Will Not Be Televised are waiting to be discovered later and set the tone for the much heavier side two – which has the same running order on the UK and US pressings. Esther Phillips` version of Home Is Where The Hatred Is might be more popular amongst some – and it is a stellar version – but for me you can’t top the heartbreak in Gils voice.

Favourite Gil factoid is still that his dad played football for Glasgow Celtic though! Respect to “the Black Arrow”!

I treated myself to a few things from the Trunk Records website this week, which prompted me to give this record, released back in the spring, another couple of spins… 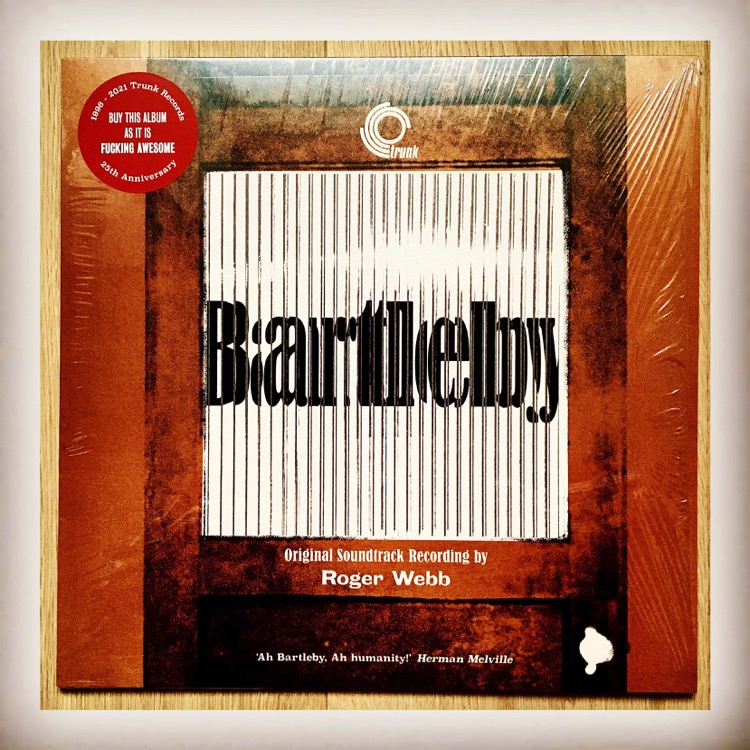 Late last year I was totally obsessed with the stunning Bruton Records compilation that Trunk Records put out, and that, coupled by Mr Trunk`s star turn in the excellent Library Music Film from a couple of years back, meant I started paying closer attention to the label. I wasn’t aware of the Bartleby story until I saw this LP for sale, so I’ll give you a quick summation – although not as good as the one Johnny Trunk includes on the cover. Bartleby is a classic short story from Herman Melville – yes, the whale guy – written in the mid 19th century. It tells the story of Bartleby, a scrivener – a kind of legal scribe – who is hired by a Wall Street firm and then refuses to do any work, simply saying “I’d prefer not to”. The story descends into madness but is a prescient tale of mental illness and isolation. This barrel of laughs was made into a film in the UK in 1970, transferring the story from 19th century New York to 1960s London. They asked up and coming composer Roger Webb to compose the soundtrack, which remained unreleased until this first UK pressing. And what a joy it is! The hype sticker on the sleeve reads “BUY THIS ALBUM AS IT IS FUCKING AWESOME”, and you know what? He’s not wrong! It’s a really astonishing blend of contemplative, very English sounding, themes, played mostly on strings and harmonica, juxtaposed with some sharp as tacks `60s jazz grooves. These are built on tough as nuts drums, fluid upright bass, and beautiful flute and strings riffs. Imagine some beautiful KPM LP called Pastoral Themes, and then another called Jazz Killers, one on each deck, and the DJ is blending effortlessly between to the two.

I generally play this LP twice, maybe three time in a row, it’s that good. Treat yourself, it’s nearly Christmas.

We’ve had a couple of sunny days over the weekend, so some wonderfully bonkers Brazilian music seemed like good accompaniment… 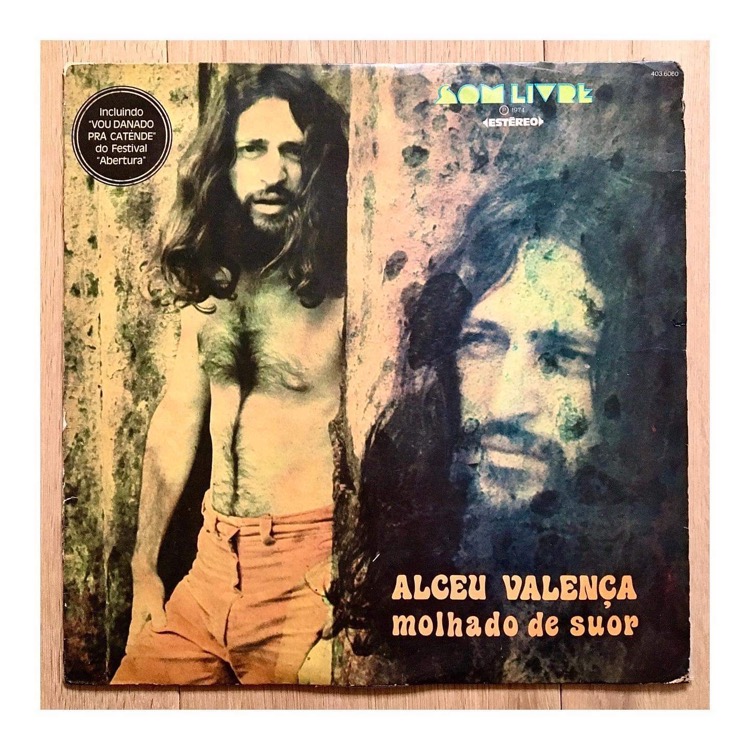 If you’re a fan of Novos Baianos you are probably going to love this LP. It’s part of that wonderfully fertile period of Brazilian music which burst into life from the Tropicalia movement. A heady mixture of traditional Pernambuco folk music, boss nova, psychedelic rock, and general acid drenched insanity.

I came across the album on a Brazilian music blog back in the mid noughties, but then was spurred on to find a vinyl copy after the track Punhal De Prata was included on the wonderful Soul Jazz compilation, Brazil 70.

My copy is the second Brazilian pressing, with the track Vou Danado Pra Catende tacked onto the front of the LP after it had become a success during the Festival de Abertura of 1975. The whole LP is magnificent, but if you want to get on YouTube and check the best bits, my personal favourites are two of the more gentle, beautiful tracks – Borboleta (side 1, track 2) and Mensageira Dos Anjos (side 2, track 2). It’s stunning, ant the fact that my 46 year old copy crackles like a bowl of Rice Krispies doesn’t diminish it’s loveliness. Plus, it’s on the Son Livre label, and despite the obvious wear and tear to the labels of my copy, it’s still for me one of the all-time great label designs.