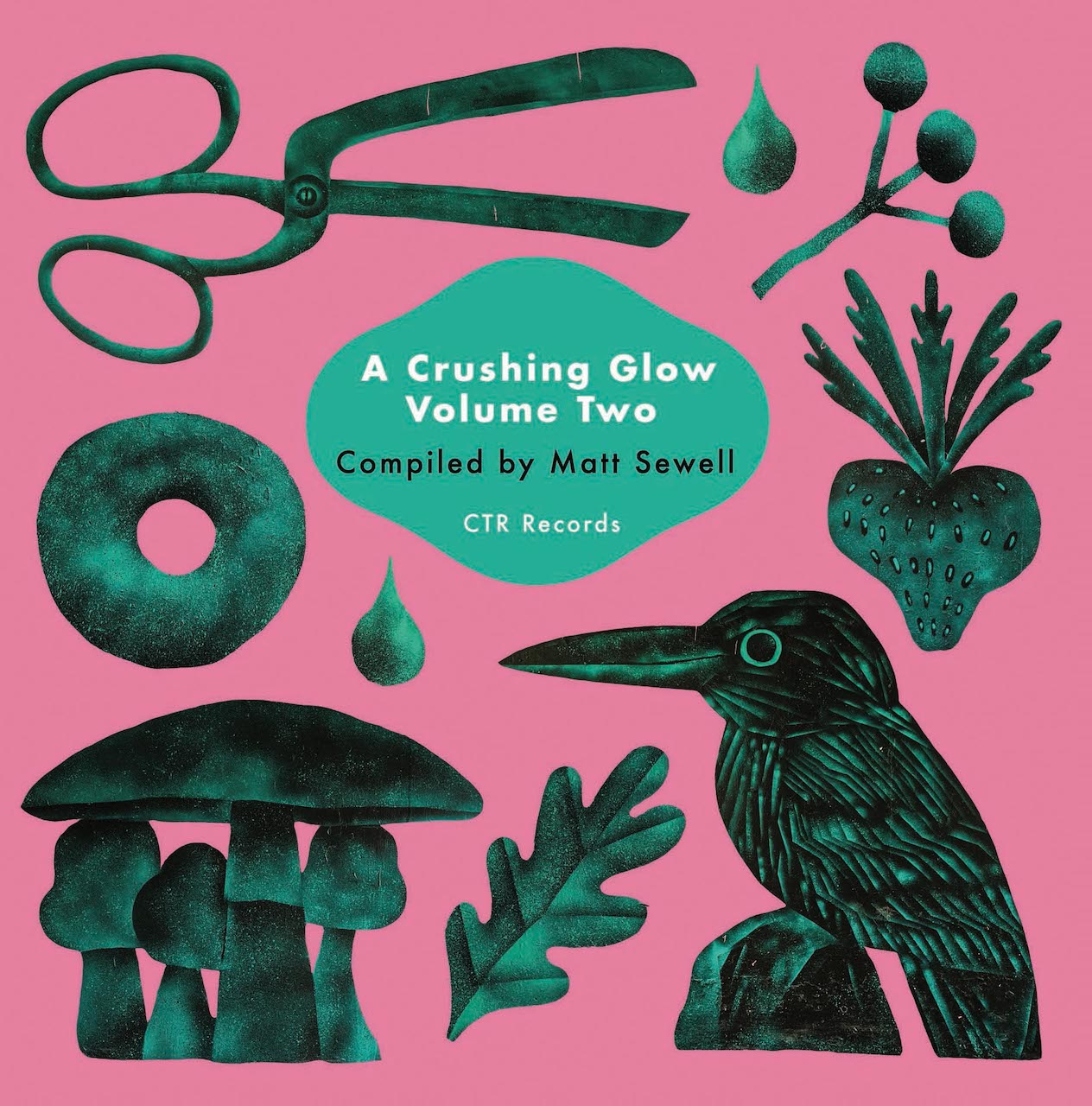 Gifted author / illustrator Matt Sewell returns to Caroline True, with the carefully crafted compilation, A Crushing Glow 2. Eight years have passed since the release of its predecessor, which sought out beauty across a wide range of genres – and where some of the gems, such as Tin Man`s Falling Acid, were perhaps surprising electronic selections for someone as synonymous with wildlife-watching and nature-loving as Matt. To my ears the follow-up has been even more painstakingly put together. Perhaps that explains the big gap. While it still wows with its eclecticism the package feels more cohesive, more like a marvelous mixtape than a magpie-eyed, micro-dosed musical all back to mine.

Listening to the first 4 tracks, for example, it`s difficult to spot the join. Slowly strummed folk, haunting, ethereal, slightly, and softly psychedelic. The aural equivalent of Californian (orange) sunshine and lens flare. Mock Elizabethan madrigals move with an easy swing, like The Electric Prunes, or The Cyrkle, off to visit Simon & Garfunkel`s Scarborough Fair. There are ace acoustic lullaby-like love songs, bowed and tabla-tickled Sufi-esque spirituals, and perfect post-rock picking, plugged into reverb and delay. Overdubs creating serene Steve Reich-ian ripples. Synergizing with subliminal sighs. Building to an overall euphoric mind-mending effect. Tuned-in while driving around the countryside that I’m lucky enough to now call home, it`s as if I’ve turned on a time-machine, daydreaming that I’m travelling The Hippie Trail, huffing hashish at the helm of battered old bus. Halfway to Marrakech.

Somehow the set wouldn’t feel complete without a heavenly Hindu mantra – given Matt and Caroline True`s tantric track record – and Amme Bhaghavathi-Devalakshmi`s Devinamam doesn`t disappoint –  a hymn, a prayer, a call to the cosmic universality, an angelic accapella accompanied only by faint sitar strains. David Darling’s collaboration with Taiwan’s Wulu Bunun Tribe has the feel of an Alan Lomax / Folkways field recording. Traditional song, and the burr, purr, of an ancient hand-drum, intercut with classical cello swoon, eventually segueing into a something that could have been served up by the Penguin Cafe Orchestra. Bruce Langhorne`s Ending, with its weathered woodwind, violin, and homesick ache, has often been compared to Boards Of Canada, while Phil France`s Transition stretches out into a symphonic finale, full of awe and wonder.

Taken in a single hit, ACG2 is a gentle and reflective trip. There’s a message in the music, even if it doesn’t depend on lyrics to spell it out. While certainly not melancholy, rueful, perhaps, well aware of humankind’s mistakes and flaws. The mood just shy of optimistic maybe, but hanging onto hope.

Matt Sewell`s A Crushing Glow 2 is available to pre-order directly from Caroline True.