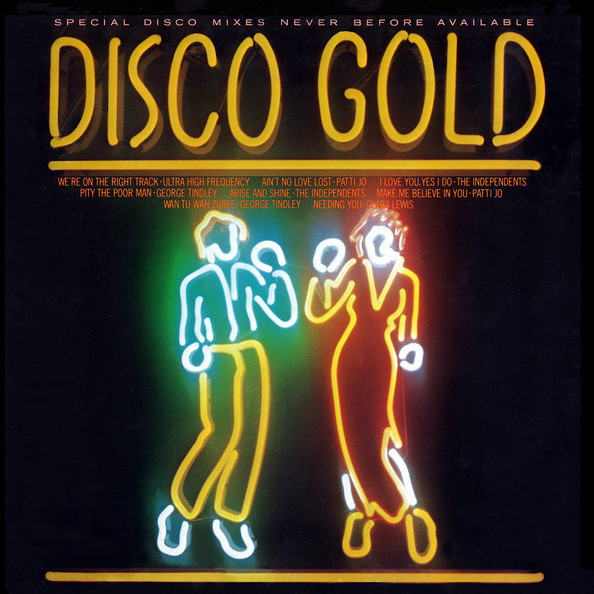 I’ve just re-read Andrew Holleran`s book, “Dancer From The Dance”, so it seems necessary to write about this complete masterpiece… where Curtis Mayfield does the impossible, and makes a better version of a Curtis Mayfield song – for someone else!

The following passage is from the afore mentioned novel:

“There was a moment when their faces blossomed into the sweetest happiness, however – when everyone came together in a single lovely communion that was the reason they did all they did; and that occurred around six-thirty in the morning, when they took off their sweat-soaked T-shirts and screamed because Patti Jo had begun to sing: “Make me believe in you, show me that love can be true”. By then the air was half-nauseating with the stale stench of poppers, …” (Andrew Holleran – Dancer From the Dance – 1978) 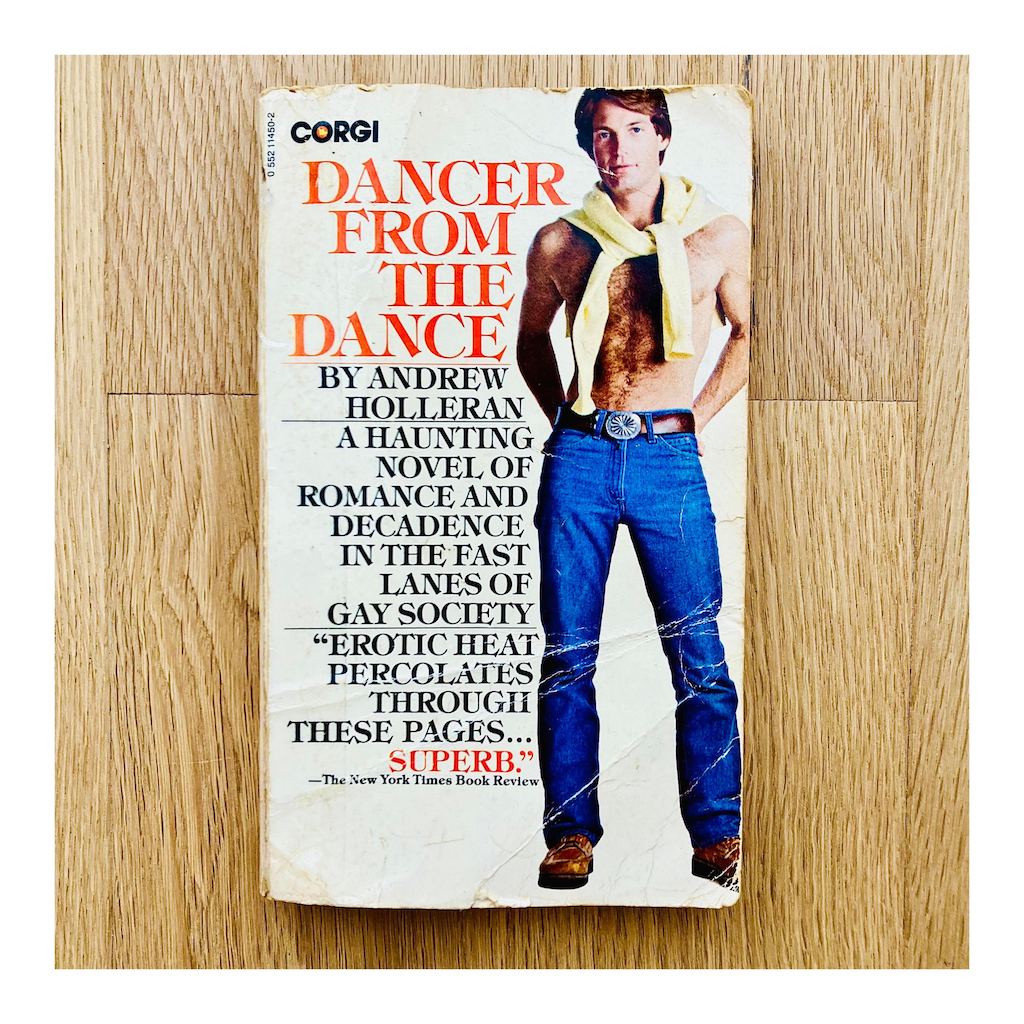 Dancer From the Dance tells the story of two gay men in 1970s New York. Set as it is in a pre-AIDs world, the book charts their adventures as they dance their way through New York’s gay society, spending their time between Fire Island in the summer and Manhattan`s nightclubs in the fall and winter. It even includes real events, such as the Everard Baths fire in 1977, which took the lives of 9 men, including rising DJ / producer Jimmy Stuard. The extract above is set in a fictitious spot called The Twelfth Floor, which I’m guessing must be some sort of composite, based on the actual early `70s nightclubs Tenth Floor, 12 West and Flamingo. It’s an incredible read. It also helps to illustrate just how magical a record Patti Jo`s Make Me Believe In You is.

Very little is known about Patti Jo, so most of the background I have is pulled from a couple of blog posts that I found on the interwebs…which turned out to be complete bollocks. She wasn’t a teenager from Nashville when Curtis Mayfield discovered her in 1972. Patti was born Ethel Patricia Demps in Otter Creek, Florida, going on to live in DeLand and Miami, where she began singing in nightclubs, rock bars and strip joints. She probably came to the attention of Curtis after she landed a starring role in the Broadway musical “Purlie”, where she took over the role of “Lutiebelle” from none other than Melba Moore (more of Melba later). Curtis had already gone solo from The Impressions and set up his own Curtom Records label with former Impressions manager Eddie Thomas (Curtis = Cur, tom = Thomas, geddit?). This makes it rather strange that Patti’s records came out on the Scepter / Wand imprints instead, but her first single was the Curtis-written and produced Ain’t No Love Lost / Stay Away From Me..

In 1973 they followed that up with another Curtis-penned and produced song, Make Me Believe In You. I’m guessing that the previous year’s psychedelic soul masterpiece from The Temptations, the Norman Whitfield produced Papa Was A Rolling Stone, had some influence on the song`s  bass-line – but with its driving, propulsive beat, its soaring strings and gorgeous vocal, this second 45 from Patti Jo would be destined to join The Temps` joint in classic status.

Make Me Believe In You was minor hit when released on Wand as a 3:39 7” single, finding an audience in the underground clubs of New York’s embryonic disco scene. It also found a receptive audience in the UK on the Northern / modern soul scene, thanks to Colin Curtis and Ian Levine of the Highland Rooms at the Blackpool Mecca. Curtis Mayfield then recorded his own version, including it on his essential 1974 album, Sweet Exorcist. Curtis` version is beautiful in its own right, slowing the track down considerably, but retaining many of the same musical elements. However, it would be the following year, when the song would truly become an anthem. 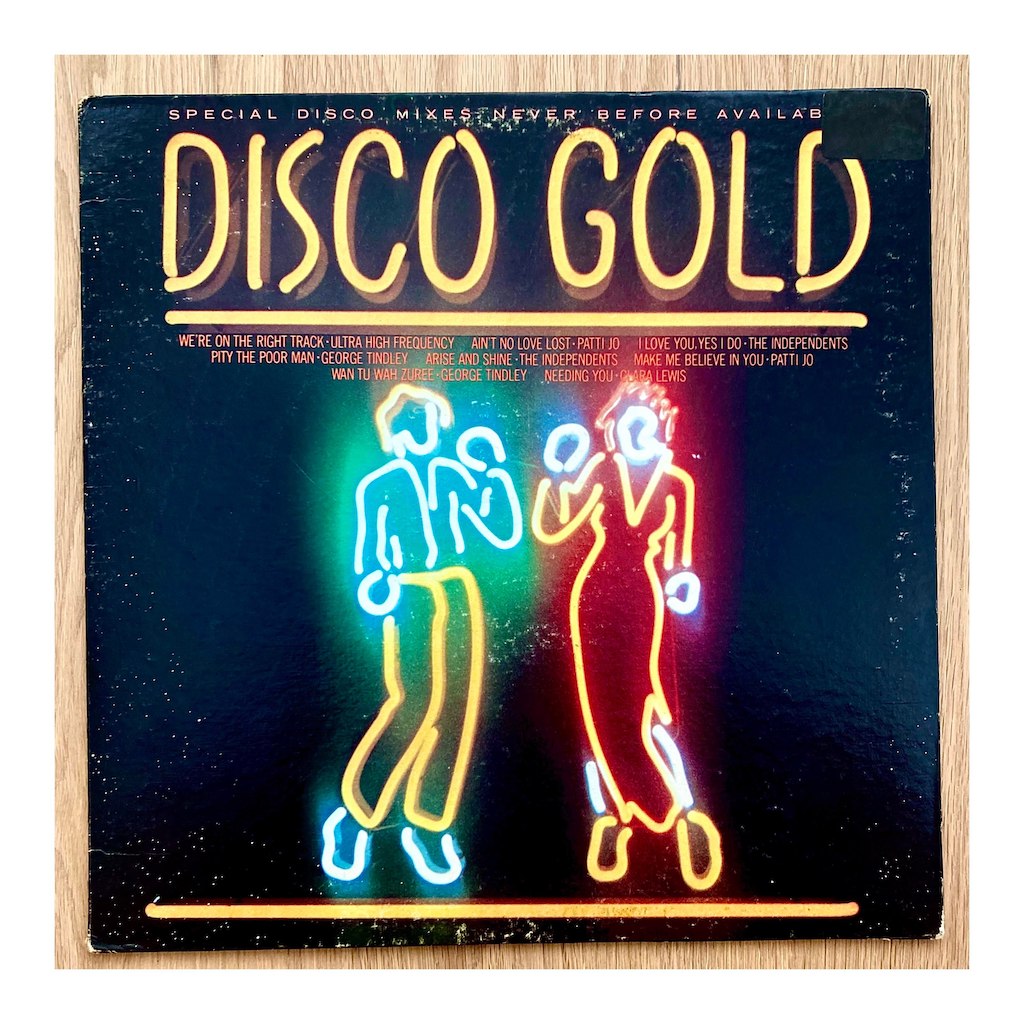 In 1975, Tom Moulton was hired by Scepter / Wand to compile and remix an LP`s worth of tracks from their back catalogue, specifically for the emerging disco scene. The LP would be titled Disco Gold, and Moulton was given access to the Patti Jo master tapes. The result is astonishing; a masterclass of minimal tweaks to get the best from the track. First up he extends the original 12 bar intro of drums and bass, stretching it out for over 2 minutes, while bringing in and out the other musical elements. Next, when we finally do get to the vocal. Tom, again, strips out everything but the drums, bass-line, and flute, waiting until the hook of the chorus arrives before bringing back the strings to dramatic effect. The combined impact of these two subtle compositional changes is stunning, taking the track to intergalactic heights. He then lengthens the bridge and makes other fine adjustments, stretching the track out to just over 6 ½ minutes of musical perfection.

The results meant that Make Me Believe In You became a disco classic. So much so that the following year Melba Moore covered the track, emulating almost exactly the Tom Moulton mix, including getting Tom Moulton in to produce it.

Jump forward to 1992, and this wonderful record was about to be reintroduced to a new audience. London DJ, producer, and disco aficionado Phil Asher released 2 disco re-edits, called, By Daylight and Hope, on his label, JPR Records. This record is so important, and incredible, that it brought Patti Jo back for the post acid house / Balearic network UK club scene.

In 1992 this was a strange record. As hard as it might be to imagine in the current musical world that we live in, where the market is saturated with re-edits of classic tracks, there was a time when the disco re-edit was almost unheard of – rather than an entire genre of its own. The practice of DJs and producers making their own versions of tracks, by cutting and splicing tape had almost disappeared as an art form, but with the arrival of this 12, followed the next year by Harvey and Gerry Rooney with their Black Cock label, the re-edit gained a new lease of life.

The A-side is an excellent reworking of the Maze classic Twilight, given some propulsive house music drum programming, plus a few nice vocal samples. It works wonderfully, and most who bought the record played this side. On the flip though, Hope, is where the real magic lies. Adrian LuvDup immediately decided that this was the side which was getting hammered by him, as did a few others on our small and friendly Manchester Balearic scene. What you have here is such a simple but effective track. A vocal phrase – “Hope, `cos I’ve learned to cope!”* – gets looped to infinity over a beautiful soul / funk / disco tune, which none of us had heard before. It turned out to be Tom Moulton mix of Patti Jo’s Make Me Believe In You. To be honest, I’m not sure how we discovered that now.**

Hope became a huge record for me, personally. I was still playing it regularly 4-5 years later, as were many others. It also sent us all scrabbling about to try and find the original Patti Jo version. A quick fix was available when we learned of its inclusion on a 1988 Kent compilation LP called Flare Groove, but of course it was the Tom Moulton mix that we all wanted, which proved much harder to find. I scored both my 7” US promo and my copy of the LP from a stall on the first floor of Affleck’s Palace called “Out Of The Past”, which was an absolute gold mine for records in the `90s.

In 1996, together with Kelvin Andrews and Danny Spencer, I remixed the Blue Boy hit, Remember Me, for the UK release on their Pharm Records label. We sampled the intro to Patti Jo, and turned in a real disco homage. It’s on the UK promo double pack and the CD single as the Cavern 3 version if you want to check it out.

A few years later, in 1999, Frank Tope and Dean Rudland did the world a huge favour, by officially licensing and releasing Patti Jo on their Original Soundtrack Recordings label. 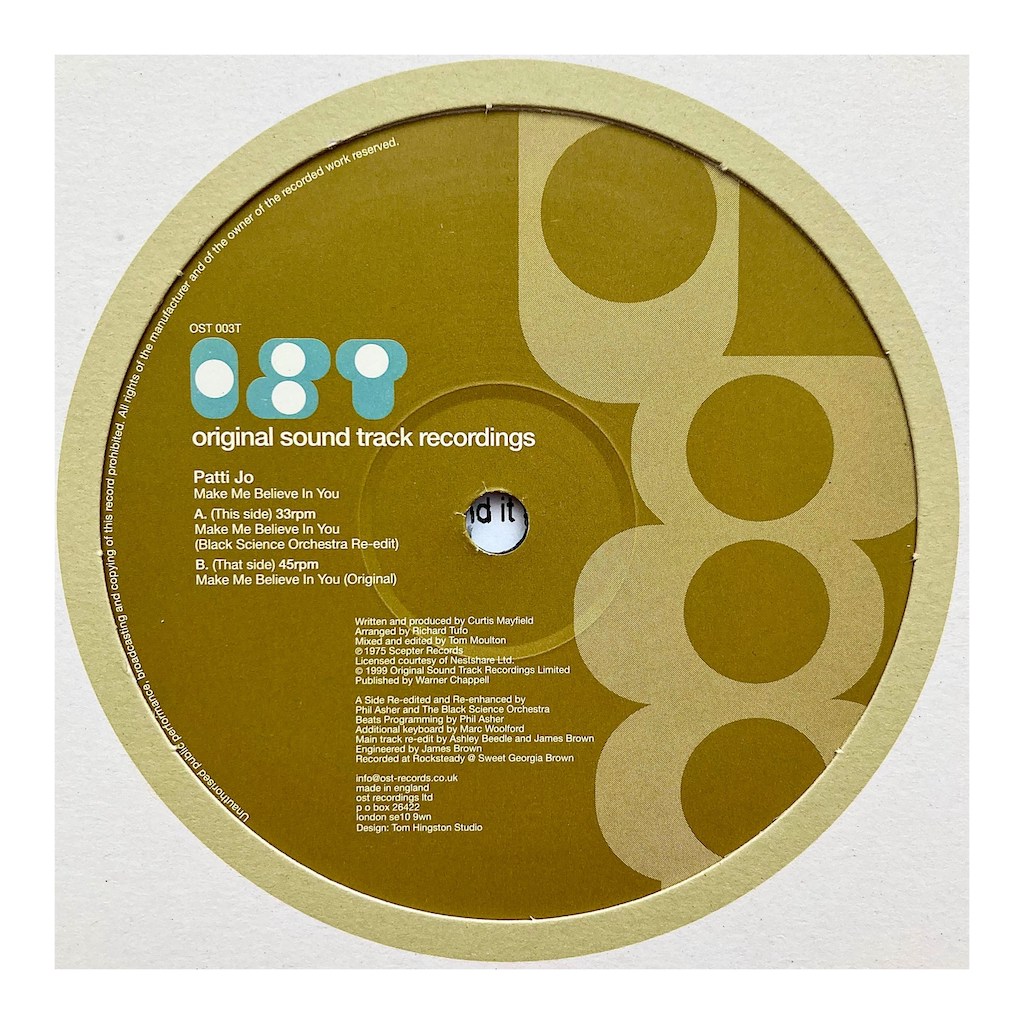 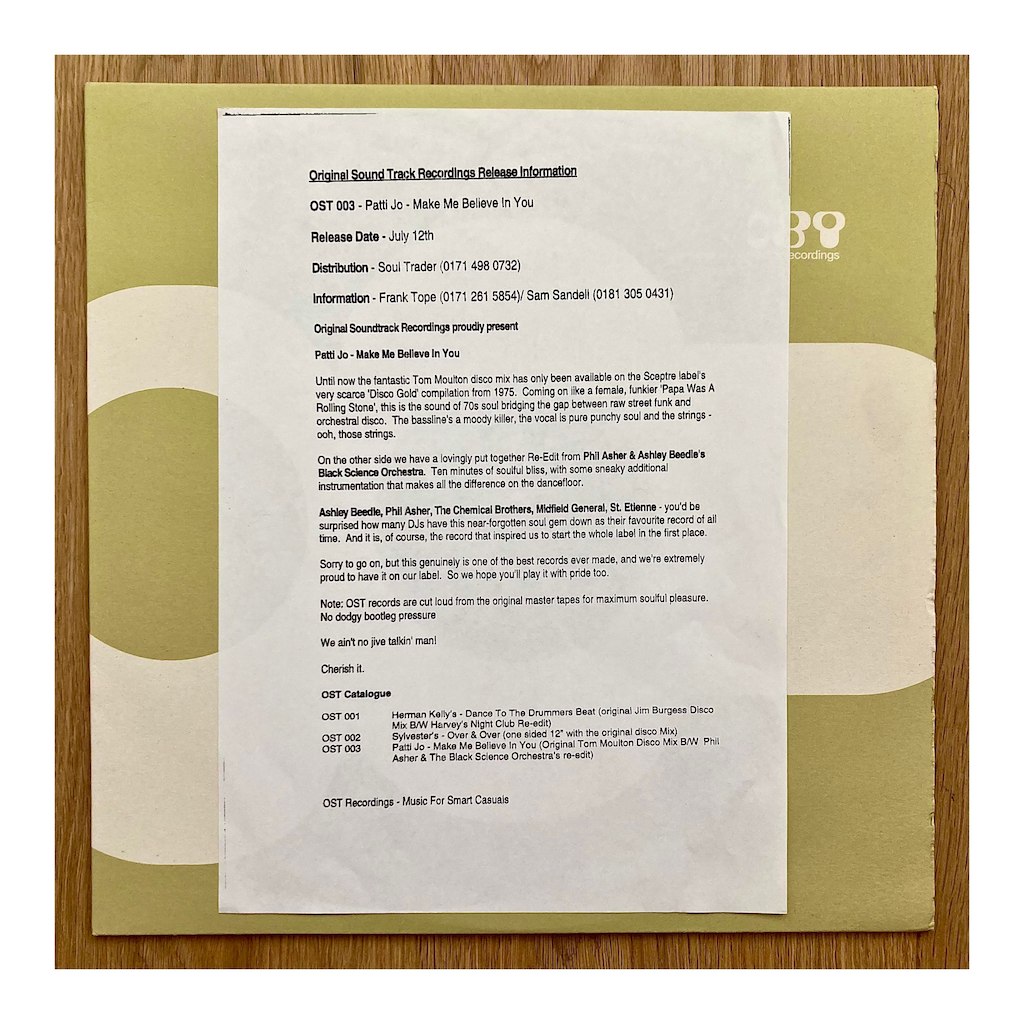 This was the first time the Tom Moulton mix had ever been available on a 12”…and who did they get to remix it for the B-side? Well, it had to be Phil Asher of course, ably assisted by Ashley Beedle, under the guise of Black Science Orchestra. Thank you Phil, for bringing this record back into our lives.

*Pinched from a tiny break in the Warlock Remix of U.K. 1 (One)`s Yeah! Turn On The Light.

**There’s second mix of Hope that places the accapella over the instrumental parts of Don Ray’s Standing In The Rain, which is another New York disco classic, which I now adore, but had no knowledge of at the time. So, thanks Phil, for not only making this brilliant piece of music, but for introducing me to 2 more records which have gone onto be lifetime favourites.