Bespoke Tokyo clothing retailer Vendor have teamed up with Jakarta-based promoters / designers Pleasure. Collaborating on a limited run of the third and final instalment in Mark Seven`s Salute mix series. 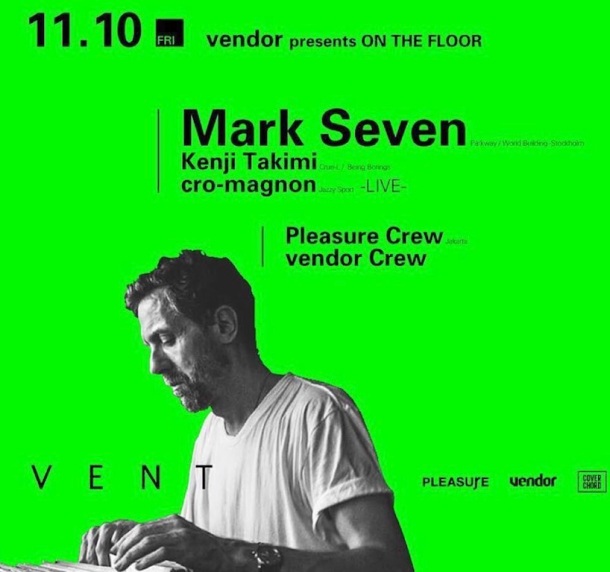 Vendor threw a launch party last Friday at Vent in Omontesando. Vent being one of my favourite venues in Tokyo. Clean, minimal layout. Low blue lighting. That gives everything a kind of (original) Blade Runner futuristic yet Noir glow. Dressed up clientele. How I imaged all clubs in Tokyo to be before I moved here. High ceilings. Custom sound system. And a chill out lounge with a tree in the middle of it. This is where I sat. Savouring a rare Friday night cocktail (usually I`d be washing my kids sports kits). Transfixed by projections of a strange ecstatic ballet involving Indian dancers and a herd of elephants. My ears full of the sound of Kenji Takimi on the warm-up. His first hour encompassing Italian Pop, Hip Hop, Disco, dark pounding Industrial, and shamanic percussion a la Toulouse Low Trax. All of it screwed into Takimi-san`s own unique slow, sleazy, bass-overdriven take on Cosmic. It had me thinking that perhaps his perfect gig might be some super high-end BDSM club. Raising the tempo in the second hour to work in Kieran Hebden`s Question. Then handing over to a live set from Cro-Magnon. Who were absolutely amazing. Driven by drummer Shigekazu Otake. Bass player Tsuyoshi Kosuga switching between lead guitar and 303. Takumi Kaneko on keys, fluidly flowing together familiar themes for the “House” crowd. The climax coming as he improvised around Stevie Wonder`s Always over raw analogue Acid. Before the band leapt into a cover of Azimuth`s Jazz Carnival. Honestly, the whole joint jumped.

Mark DJed until the end of the night. Man, does he work hard. One minute he was showing me stuff in the three bags of records he`d brought. Leading the applause for Cro-Magnon. The next he was off. Continually – and I mean continually – carefully adjusting EQs. Throwing his characteristic shapes. Creating a seamless, evolving groove. Segueing short sections from countless sides of vinyl into a dynamic of rising and falling drum patterns. Not hook, gimmick, or even vocal-laden. Not packed with familiarity, or hits. Instead encouraging you to lose yourself. Get lost in it. For me it was a musical reminder of a time when no one stood and watched the DJ. Looked to him or her for cues on how they should dance. When no one even cared where the DJ was. In near pitch rooms of mating rituals and abandon.

Salutes 1 & 2 were available exclusively from London-based Oki-Ni / LN-CC back in 2009 and 2010. 1: Salute To The Men Of Vauxhall captured Mark live at Horse Meat Disco. 2, subtitled Reach Out And Touch Your Dream!, was a tribute to legendary NYC club, The Saint. 3 also acknowledges the importance of the Gay community in modern club culture. Mark dedicating The Last Dance to the memory of those caught in the `80s AIDS epidemic.

To accompany the 3xCD package, Pleasure have designed two tees, in two different colour schemes. These are available only directly from Vendor. While Lighthouse Records have the CDs alone in stock. 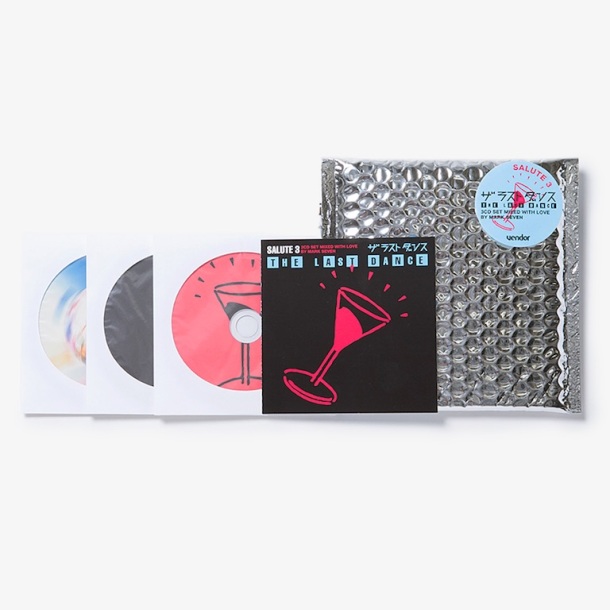