Swiss label Phantom Island might be associated with a “Balearic” sound. But if you`ve been paying attention their last few releases – from Hot Weather, Kay Zee, and The Gagosians – have taken the imprint into leftfield R&B, and Rock & Roll, territory. Always on the look out for people doing something a little bit different, I dropped Alain Kupper of The Gagosians a line – the group also featuring Patrick Hollenstein, and Suzana Rozkosny. I was trying to find out what had influenced the band`s single, Run For Your Honey. Refusing to give me any specifics, Alain said I`d be better off listening to the recording of a DJ gig he`d just performed, one Sunday afternoon, at Oor Records – which you can find linked below. Delivering Three hours of Arkestrated noise. Synth freakouts segueing into sitars. Chords showering like comet tails. Skanking, horn-led Digidub warrior charges. Mutated Minimal Wave Funk. The Maharishi espousing. A Moog-y vamp on A Love Supreme. Skronking saxes. Screeching violins. Spaghetti Western guitars, and Latin Jazz. Ju Ju, man! Vibes solos. 60s Psyche. Blues licks. Poetry, Rap, feedback, and discord. Muted brass, and whistle-blowing Batucada. Cosmic Rock, Garage Punks, and Heavy Metal roar. Angular Post-Punk Dub, and dancing Situationists. Comedy sketches. Antipodean Pop. Rude Electro, and Basquiat`s Hip Hop snapshot. Head-nodding Boom Bap, and a Funkadelic hymn.

I was born in Basel, Switzerland. My father was Swiss. My mother is from Madagascar.

Out in the zürich nightlife.

How did you hook up with Phantom Island?

We went to the same clubs. All of us have been involved in music for more than two decades. Basically since the 80s.

Where are your favorite places to hang out? To catch a coffee, listen to music, buy records, grab a beer, go dancing?

My favourite record stores in Zürich are 16tons, RecRec, Oor, Hum, and Zero Zero. My favourite place to hang out is 2-2=0 – which is a very small private space. Also some galleries, and happenings organized by ourselves or friends. 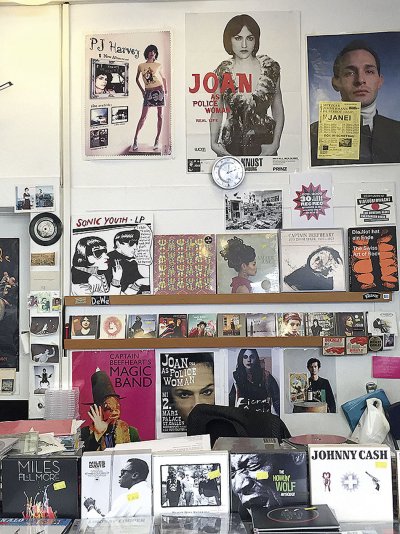 Is the local music scene lively? Are there any local bands or artists we should keep an eye / ear out for?

Who plays what on the recordings?

Everybody plays mostly everything. Some of us write and sing too.

Do you play live, or have plans to play live?

No, we have no plans for live gigs.

Is Gagosians a reference to the US gallery chain?

Sure. Larry Gagosian was my inspiration for the name.

Do you have any favorite painters, or visual artists?

In my review of the single, Run For My Honey, I likened the sound to that associated with 80s Downtown New York, and the Mudd Club. Basquiat, Blondie, Vega & Rev. Kind of Electro Rock and Roll, topped off with performance art. Was this the sound you were going for?

We never have the intention to go for a certain style / genre of music, but it’s inevitable to refer to things you know and like.

What are you listening to at the moment?

A lot of Delta Blues from the early 20th Century, some experimental stuff, some Jazz.

Will there be more music from The Gagosians?

Right now everybody is back in other projects, so the future of the Gagosians is uncertain.

The Gagosians` Run For My Honey is available now on Phantom Island.