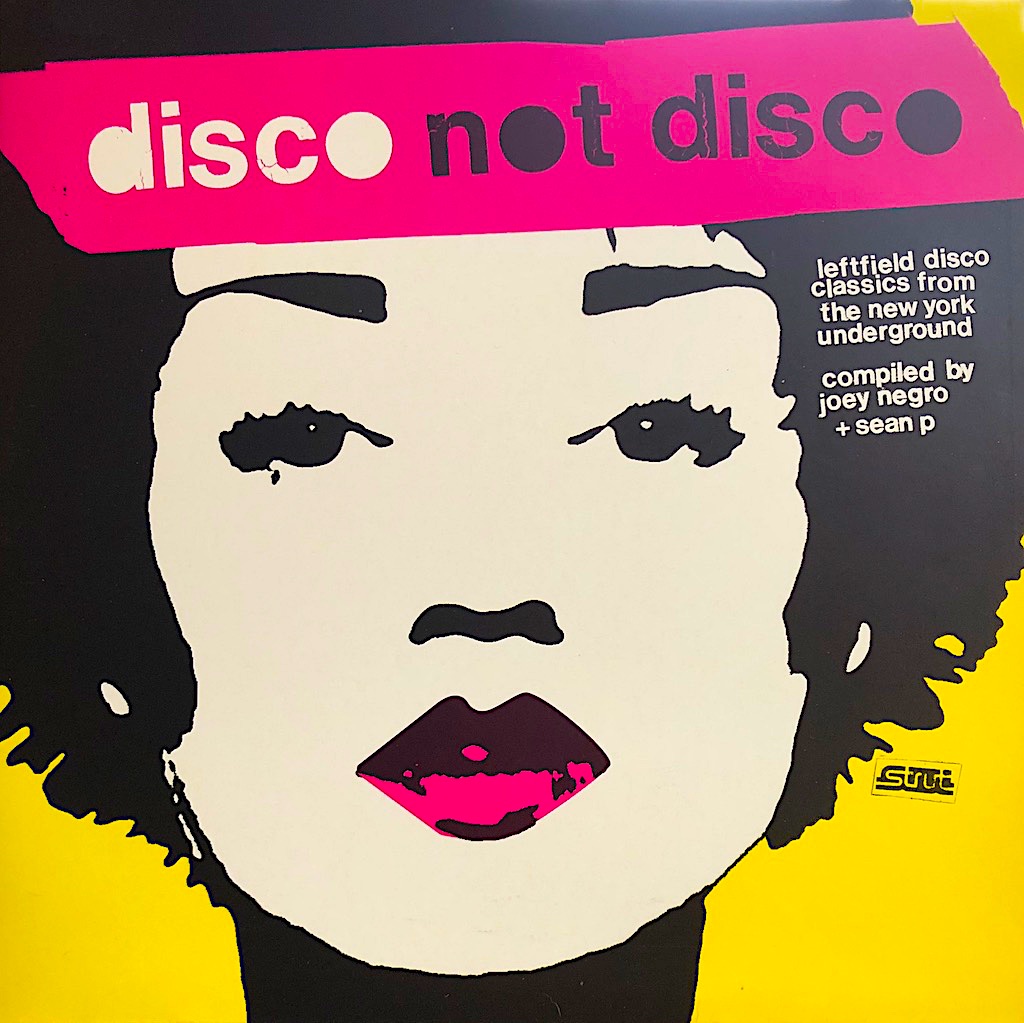 When Strut released the Disco-Not-Disco compilation back in 2000, it was such a gift. I picked up a copy in the Covent Garden Rough Trade. The one below Slam City Skates. I thought they’d miss-priced it. I still suspect they did. I got six sides of vinyl for 9.99. Crossed three long-term “Wants” off my list, and got introduced to another nine great tracks.

Complied by Dave Lee and Sean P., Disco-Not-Disco didn’t just define a genre, it created one. In a post-midnight landscape dominated by seamlessly beat-matched House, it challenged DJs to come up with more adventurous playlists. It caught a mirror ball zeitgeist, and stopped dancing from becoming boring. Giving a name to the music being popularized by Nuphonic`s championing of David Mancuso`s Loft. Harvey and Gerry Rooney`s Black Cock edits. Tunes produced by Faze Action and The Idjut Boys. The comp, and label, Strut, were key in London’s re-discovery of Arthur Russell, Larry Levan, and Walter Gibbons, and consequently, the capital found itself going bang! instead to a soundtrack of ESG, Peter Tosh`s Buk-In-Hamm Palace, and Ian Dury`s Reasons To Be Cheerful (Part 3).

For me, Dury`s Spasticus Autisticus was the revelation on Disco-Not-Disco. The result of Dury`s scruffy Soulboy sojourn to the Bahamas. Ditching his band, The Blockheads, and escaping to Compass Point Studios, with keyboard wiz Chaz Jankel. Dressed in a “Weeds Of Wisdom” tee. Sly and Robbie on rhythm. Tom Tom Club’s Tina Weymouth helping out with backing vocals. Tyrone Dowie providing the Prophet synth hook. Engineered, mixed, and transformed into a Paradise Garage anthem by Steven Stanley.

When Dury screams the song`s chorus of “I`m Spasticus. I’m Spasticus. I`m Spasticus Autisticus”, it`s a Punk Funk proclamation that he’s “different”, and “he don’t care”. When the chant`s then repeated in a variety of voices, it`s a direct homage to Stanley Kuburick`s Spartacus***. Referencing the defeated rebel slaves who try to save their leader from crucifixion by each in turn claiming to be him. Male, female, camp, macho. The message seems to be, that everyone is “different”, and who is anyone to judge. Who can stand up and shout, “I`m normal”?

Brilliant sleeve notes cover the gatefold. Though I have to admit that the necessarily small font is a bit of a struggle for these old eyes now.

The last time I heard Was (Not Was)`s Wheel Me Out was about six weeks ago, at an Elevator East bash in Clapton. Doing balloons in a re-purposed council block, packed full of frugging folks, around thirty years my junior. Confirming the longevity of Sean and Dave`s efforts.

Strut`s seminal Disco-Not-Disco compilation, selected by Sean P. and Dave Lee will be back in shops for Record Store Day, this Saturday, April 13th. This RSD release will not contain Steve Miller’s Macho City, which is scheduled for a separate reissue elsewhere.

***Dury`s song also serves as a reminder of a personal “Spartacus” moment. When six of us turned up to Boys Own do with only two tickets. Perhaps hoping that if we were all touching a corner, then we`d all get in. The door person, of fluid gender, 6’ 4” in heels, and stunning in silver sequins, of course knocked us back.

Such was our bonhomie – I guess we must have necked up on the way – that no one would now lay claim to the tickets.

Backwards and forwards, in a pill-head excuse-me. Add infinitum, like a bad Monty Python sketch.

The party was at The Soundshaft in Brixton. Danny Tenaglia played the whole night. Tore the roof off. I found myself queuing for refreshments with Masters At Work and Roger Sanchez. A musical highlight was New Order`s World (The Price Of Love). Which never sounded as good, before, or since.