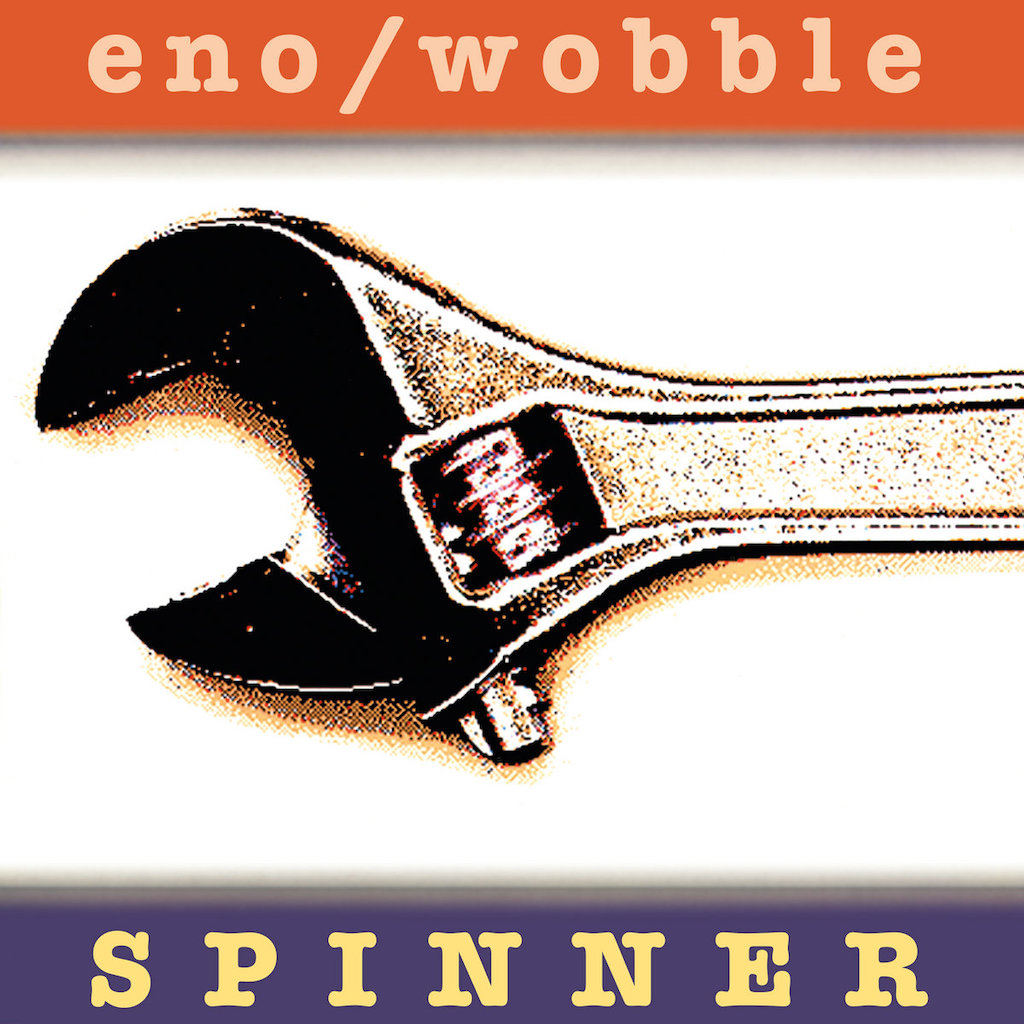 Spinner is a “collaboration” between two musical mavericks, Brian Eno, and John “Jah Wobble” Wardle. Collaboration is in quotation marks because the album doesn’t represent a to-ing and fro-ing of ideas, but instead a one-way sharing of sounds. There were no heated debates during all-night sessions. No fighting over mixing desk faders. Eno simply entrusted Wobble with some stereo files, and said, “Do what that wilt”*. The process of letting go, relinquishing control, seems to have been an experiment in itself for Eno.

In 1995, Wobble had signed his William Blake LP to All Saints Records, which is run by Eno`s brother-in-law, Dominic Norman-Taylor. The deal funding the start up of Wobble`s then new label, 30 Hertz. The connection prompted Eno to visit Wobble backstage, post-gig, which in turn gave rise to the Spinner project. Eno supplied Wobble with fragments of sound he`d produced for the Derek Jarman film, Glitterbug – which Wobble then reworked in his home studio. The new tracks inspired by, and intended as a new soundtrack for, Wobble`s walks around Bow Creek, where the River Lea meets The Thames.

In his autobiography, Memoirs Of A Geezer, Wobble recounts his side of the story of Spinner – about how after submitting the results of his labour he received a long fax from Eno. A critique in which Eno described how he wanted to be treated like “a Moorish maiden” – which Wobble refers to as “camp bullshit” and says he binned after reading only the first paragraph. Wobble also writes that he suspects Eno was playing him, getting him “at it”, but concedes a respect for Eno, both in terms of musical and business “talent”.

For his part, Eno actually published a letter regarding his thoughts on Wobble`s input to Spinner. The “Wobbly Letter” appeared in his collection of essays and diary entries, A Year With Swollen Appendices. It includes the Moorish maiden comments, and while it suggests some edits and mixing tweaks it`s generally very positive about the results of Wobble`s work. It`s also super clear that Eno loves Wobble`s bass-lines.

Spinner sounds like neither an Eno record, nor a Wobble record. Not even somewhere in between. A lot of it resembles the dub transmutations of Bill Lawsell, and / or his collective, Material. Bottom-end heavy “ambient” excursions, influenced by the raw “electric Miles” of Dark Magus, and Pangaea. Guitars snarling in improvised wah-wah freak-outs. Blurred cymbals instigating dimensional shifts. Organ figures conjuring Ray Manzarek`s Continental Vox. The Door`s The End scoring Coppola`s Apocalypse Now. Stoned and menacing. Guest sticksman, Can`s Jaki Liebezeit`s battery charging through jazz syncopation at drum & bass tempos, in a fleet and fluid fusion. Eno`s careful snippets of piano, cello, `copters and trumpets are pushed, phased and inverted through sonic parameters. Moments of melody now / soundeffects. Defying gravity and physics – sent spiraling into infinite orbits of twisted timbres. All the while those B-lines rumbling. Wobble`s thumbs thundering.

The exception to this is Garden Recalled. Sparse pinpoints of sound, shining like stars, like Apollo revisited. Apparently Wobble didn’t touch that one.

Brian Eno & Jah Wobble`s Spinner has been remastered and expanded to include 2 extra tracks, plus a painting and new essay by Wobble. It will be re-released by All Saints Records on August 21st.

*It`s interesting to note that this is exactly the opposite of how Eno`s recent collaboration with his brother Roger – Mixing Colour – took shape. In that case Roger entrusted his piano midi files to Brian.