Eclectics have two brand new James Bright disco biscuits – both have the Mancunian moving in a decidedly more dance-floor direction that usual. The duo of Suburbia and The Outside each emitting an EBM / new beat vibe. The former is the darker of the pair – pulsating, undulating, and packing an almost Energy Flash throb into its motorik momentum. Its sampled party sounds and siren-like sequences gnawed at throughout by an increasingly nasty 303 growl, that threatens to, but never quite does, engulf everything. The latter is lighter, happier, house-ier, boasting a very balearic mid-tempo bounce, while surrounding an ethereal Middle Eastern maiden with soundclash SFX. Its synthesized strings and euphoric eruptions perhaps owing something to Andrew Weatherall`s The Moton 5. Acid all the while going nuts way off in the background. Hardway Bros` AlFOS Has Risen Remix, built around a big, rattling, breakbeat and sonar bleeps, comes on like a collision between The Beloved and The Cabs. Its classic 80s b-line coloured by a choral fragment – that should be familiar – and shoegaze, choirboy, vocals. An emotive piano topping off this dose of Gregorian / Dominican flavoured rave. Finally, Woolfy flips The Outside back into, onto, James` more regular chilled, sunset, strip. Creating a calm of fluttering, filtered, frequencies and gentle guitar, and then juxtaposing that with busy polyrhythmic popping and locking electro patterns. Bopping, beguiling, blissed-out, blue-skied, and beach bound. 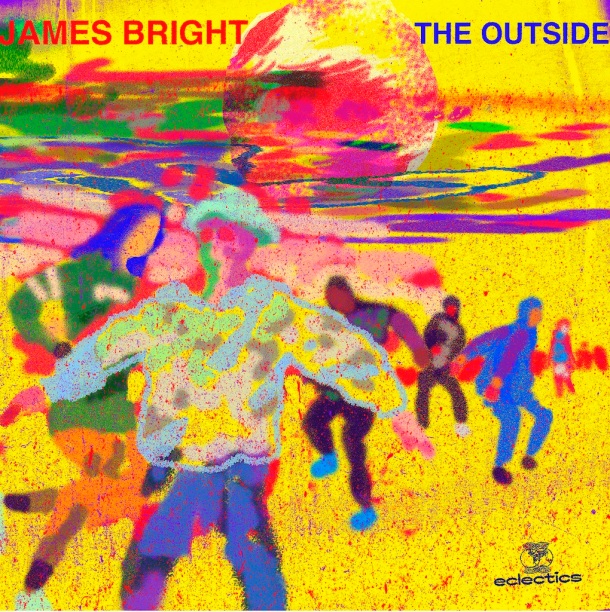 James Bright`s The Outside / Suburbia was released today on Eclectics.