Takashi Kokubo is a true pioneer of Japanese electronic music. He began a very public career as an “environmental sound designer” in the early `80s, subtly sonically sculpting commercial spaces, such as corporate showrooms and shopping malls. However, with decades of scientific research into the mood-altering, psychoactive, properties of audible, and inaudible, frequencies, through his company, Studio Ion, he has also released close to fifty albums of “healing” music – aimed to de-stress and relax listeners. While Kokubo-san is best known in Japan as the creator of everyday mobile phone “alerts” – such as e-payment signals, and earthquake warnings (famously dampened down, because the first version was too scary) – in the West these “ambient” albums have become highly sought-after and in-demand. LAG Records reissued Kokubo-san`s 1987 album, Get At The Wave (A Dream Sails Out To Sea) back in 2018, and only last year, Glossy Mistakes pressed 1985`s Digital Soundology #1 – Volk Von Bauhaus onto vinyl for the first time. Scheduled to appear at the ambient event, Seion, at Galaxy – Gingakei, this Saturday, December 4th, by way of promo, Kokubo-san kindly answered a few of my questions.

A big thank you to Ken Hidaka, for help with the translation.
All photographs of Cyber-Kun, care of Kokubo-san.

I`m from Chiyoda-ku, in Tokyo. I currently have two bases. One in Suginami Ward, in Tokyo. The other in Takekawa Town, Hokuto City, in the Yamanashi Prefecture, at the foot of Mt. Kaikoma, in a forest at an altitude of 700m.

When I was in high school.

Which instruments can you play? Have you had any formal training?

When I was in elementary school I studied organ at a Yamaha Music School, then in junior high, I played tenor saxophone in the brass band club. In high school, I played percussion in the orchestra and drums in the light music club. When I was in college, I played drums and synthesizers…but I’ve had no formal music training.

When did you first get interested in synthesizers and electronic music?

When I was in high school.

Where there any artists or pieces of music in particular that inspired you to start making your own electronic music?

What was the first synthesizer that you owned?

Was your first synth expensive?

I don’t have a synthesizer right now. I’m making music on a Mac.

Do / did you have a favourite piece of equipment?

When I first touched Fairlight CMI, the automatic performance function allows you to create sounds as if you were mixing paints with a palette, and I was strongly attracted to these random fluctuations produced by the computer. I was tired of conventional composition. In fact, while I write the basic programs, it is the computer that creates these works.

All the works on my albums are made on the premise that each is played infinitely. That is, there is no beginning and no end. However, due to the limitation of recording as an album, there is no choice but to fade in and fade out. 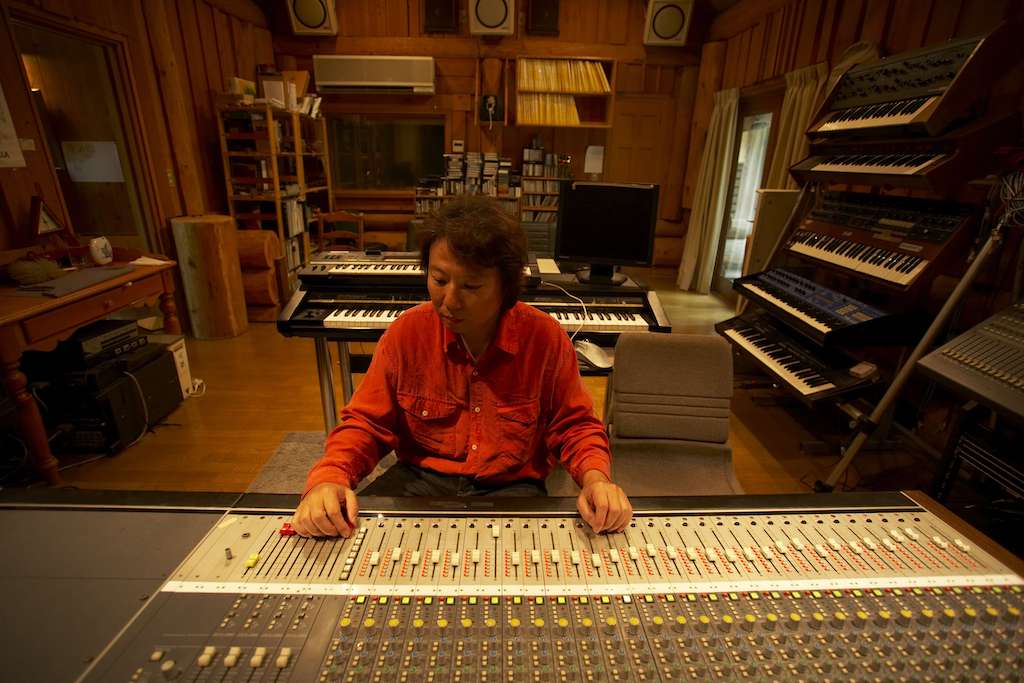 When and why did you start Studio Ion?

I started Studio Ion in 1986. I needed to start a company in order to work with the corporations that I was receiving commissions from – they would only work with a company, not an individual.

A lot has been written recently about the Kankyo Ongaku of the `80s. Was there a “scene” at the time?

I never felt that there was a scene at the time.

Were you friends with other composers such as Yoshio Ojima and Hiroshi Yoshimura?

Not at the time.

When I made Volk Von Bauhaus, it was “ambient music”, but I didn’t know it was ambient music. I didn’t know such as genre existed. I only learned about it later. I don’t think it was a big scene in Japan at that time.

What I strongly felt in the early `80s was that I was tired of music with a strong message. You had all this progressive rock music with “concepts” etc,, telling you what to think, and then on the other hand there was precisely constructed classical works, Beethoven’s sonata. I didn’t want to listen to it. Current, modern, music has become just like this as well. It`s too much. Isn’t there a need for music that doesn’t keep asking you to think?

Is it true that your album, A Dream Sails Out To Sea, was commissioned to accompany a high-end Sanyo air-conditioning?

Did you receive many commissions similar to this one?

I wasn’t particularly conscious of it as “sound design”, but from 1985 to 1986, I made ambient music for the INAX – now LIXIL – Ginza showroom. I think this was my first job as a sound designer. There is a significant difference between an artist and a designer. Artists are allowed to be irresponsible as artists. Designers are responsible for society and the environment.

INAX had opened a ground-breaking showroom, XSITE, on the 37th floor of an office building in a complex facility that fused business and culture, right in the city centre. Approximately 800 toilet bowls, wash basins and bathtubs were collected, and displayed from 30 companies in 10 countries around the world, with the aim of renewing people’s perception of toilets, which were thought of as dirty at that time – making them look like beautiful interior objects in themselves. A Villeroy & Boch toilet designed by German industrial designer Luigi Colani, a copper wash basin made by JANDELLE of Paris…

Were you surprised when A Dream Sails Out To Sea, and tracks from it, were licensed for reissue in Europe and the US.

Yes. I was surprised. I`d completely forgotten about it.

Can you tell me more about your experiments with pure tones, and your electroencephalography studies? What did you discover?

Since high school, I`ve made my own synthesizers, speakers, and amplifiers. I’m an audiophile. I`ve always been interested in the power of sound and music on people. In particular, I was interested in “3D sound” and the “spatial audio”, so I made my own binaural microphone – which I called Cyber-kun – and often experimented with sound “images” and sound fields. 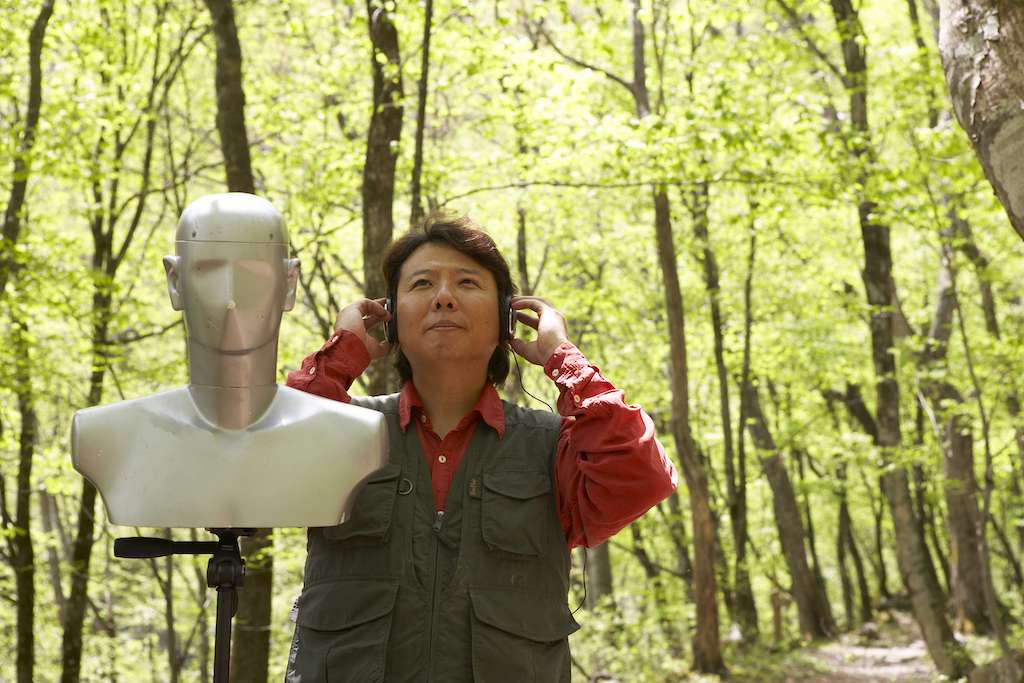 I think music is a thing that adds flavor to the air in a space. What I often try to do with my sound environment design is add a seasoning of air that makes you breathe more slowly than usual. You can change the rhythm of space. If you can create an exciting rhythm, you can also create a rhythm that makes you feel relaxed and breathe slowly. You can control the physiological movements of people who gather in the space, such as pulse and breathing, to some extent. You can control concentration and relaxation. Branding is possible. Sound can create the identity of the space. With sound, you can also partition space, create defined areas within areas.

About 40 years ago, Japan was suffering from being a very stressful environment, so through trial and error I was looking to create a “sound environment” that could induce a relaxed and stress-free state. As part of this research I was taking electroencephalogram readings. I was experimenting with the control of these brain waves.

To call it a discovery” is too strong a word, but high-frequency noise, of 20 khertz or higher – which is considered inaudible to the human ear – has the power to relax and enhance concentration. In natural forests, for example, there is a sound environment rich in these “high frequency noise of 20k hertz or more”. In addition, these natural environmental sounds are rich in 1 / f fluctuations, or “pink noise”. This 3-D movement of the sound image creates a phenomenon such as dizziness. A deeper meditative state can be created by combining this 3-D pink noise with combining with deep bass.

For a long time, I have been recording natural sounds from all over the world with a stereophonic recording system called Cyberphonic. I have visited about fifty countries. Cyberphonic records the sound of that location – up, down, left, right – recording a sense of depth, so when you play that sound back, the memory of that space, and time, will be completely revived.

Are you still continuing with this work?

Are you still making music?

Of course. I recently made an album with an Italian trombone player, called Andrea Esperti, who I met on SNS during the lockdowns, which will be released next year. I also completed the soundtrack for the movie, Magone.

Ayane Shino`s Sakura will be released globally by WRWTFWW / Mental Groove on November 26th. The launch event takes place at Tokyo gallery,  Galaxy – Gingakei, on December 4th. Legendary ambient innovators, Inoyamaland and Takashi Kokubo – who both gained global recognition via Light In The Attic`s Grammy-nominated, Kankyo Ongaku – will share the bill alongside relative newcomers, Chillax, who themselves were one of the stars of Music For Dreams` “Japanese Chill Out” compilation, Oto No Wa. Renowned local DJ / Producer, Yakenohara, aka Unknown Me, will also perform, while Ayane-san takes the headline slot. The event will be open to a limited physical audience, and also available pay-per-view. The Lone Star crew are honoured to provide additional DJ support on the night, and also host the after-party at Bar Bonobo, in Harajuku. 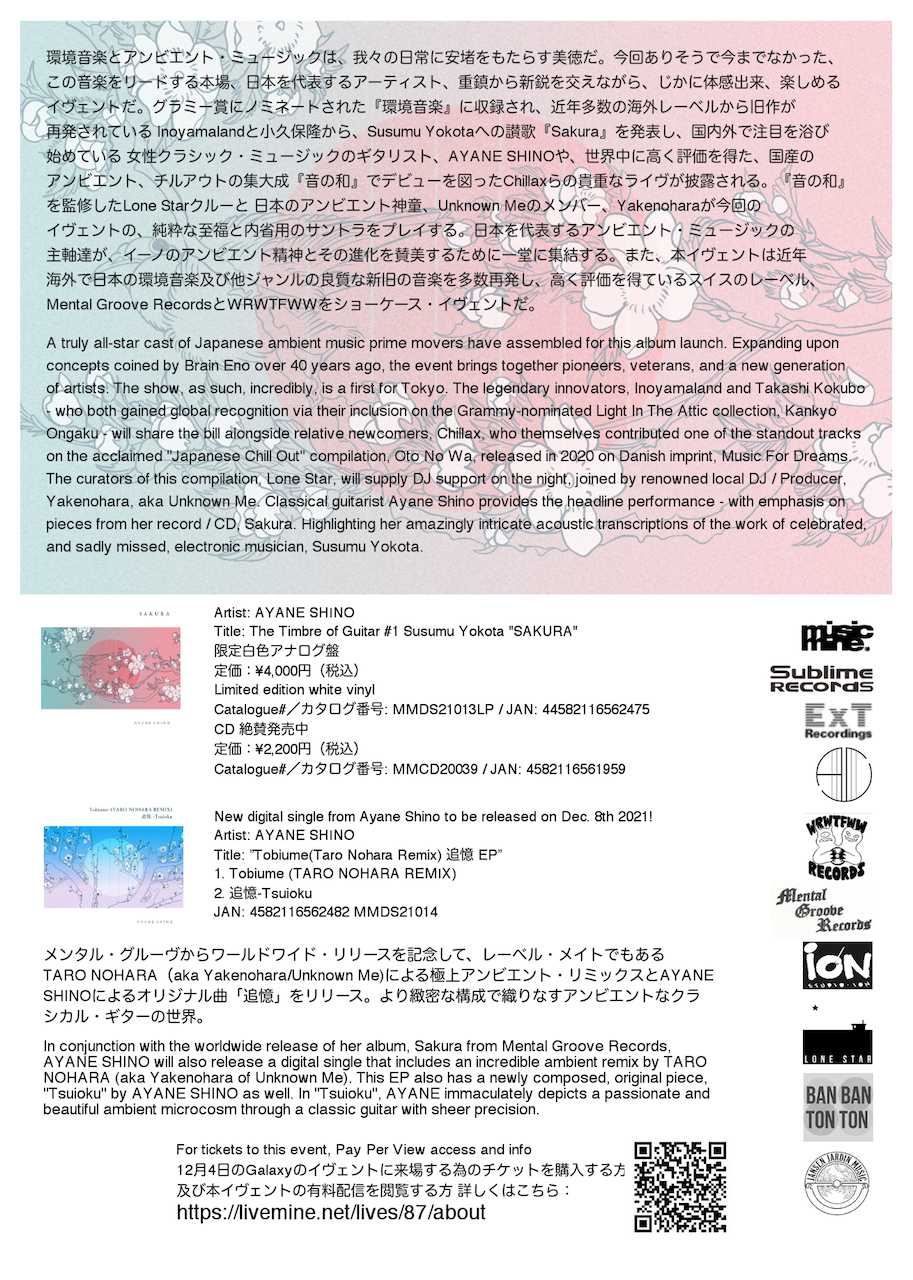 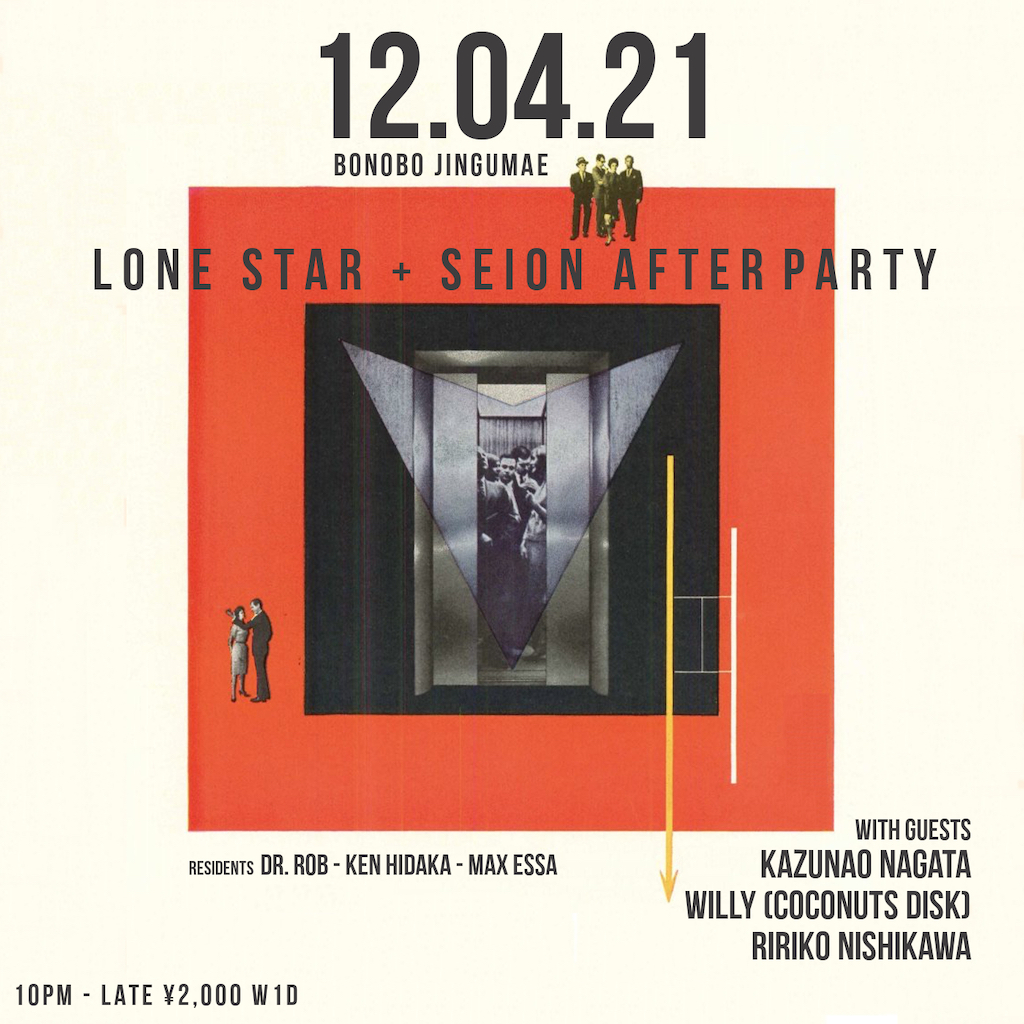