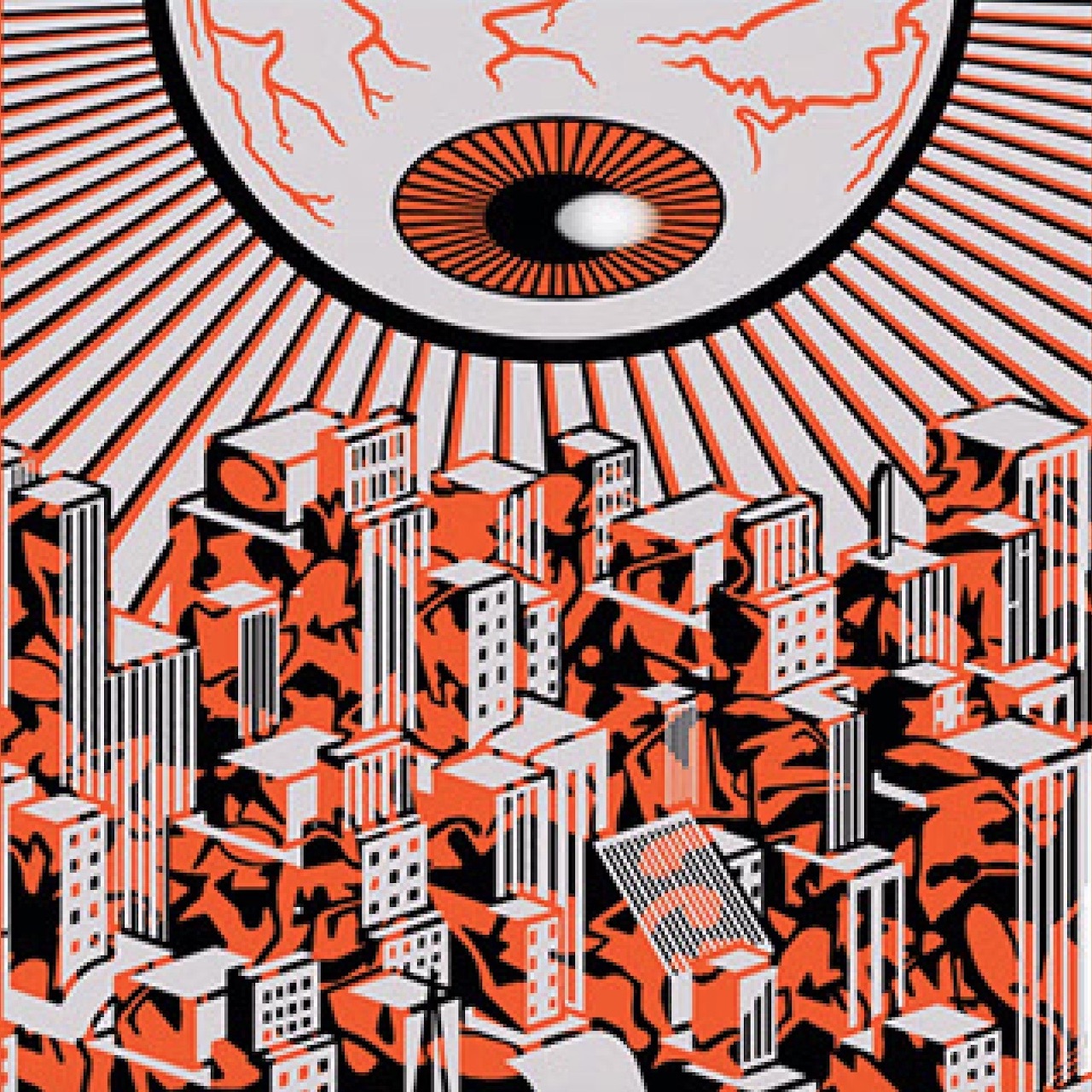 It`s safe to say that I don’t buy much techno these days. There’s not a lot of call for massive bangers in my DJ dotage of back room, chill-out, and warm up, gigs. Though of course I do keep my ears and eyes open for ambient gems, and also reissues of timeless touchstones. Last year, there were a fair few treasures dusted off.

Where do you start with A Guy Called Gerald`s Trip City? Released on cassette in 1989 to accompany Trevor Miller’s novel of the same name, there were a handful of vinyl promos sent out back in the day, which – after seeing Valentine’s Theme playlisted by The Orb – became a bit of personal grail. I even bought the t-shirt bearing Dave Little`s iconic artwork. In 2021, Velocity Press licensed both the book and the music. To be honest, I found the writing – which I think was always intended to be a bit trashy and exploitative – hard to read, and ended up skipping its James Joyce meets William Burroughs drug scenes. I`ll balance that though by stating that Trevor’s new foreword is brilliant. It`s worth it for that alone. The tunes certainly don’t disappoint. Only two made it to that promo, and you get  the full set of five here. Deft, seemingly simple, drum machine work outs, coloured by Gerarld`s then characteristic muted marimba tones. Inspired by Transmat, Metroplex, and KMS, but latin-edged, like T-Coy`s Carino. Carnival whistles countered by moody Chicago jack b-lines. Hypnotic militant marches packing phased metallic percussion and showered by celestial choirs and handclaps. A big big thank you to Travis Collins for the heads up on the reissue. There’s a cool interview with Gerald, conducted by DJ Dribbler, over at Ransome Note.

Also from `89 was One On One Crew`s Give It Up / Bassin`, rescued from the compilation, Jack Trax Volume 6, and pressed on a stand alone 12 by Rush Hour`s newish off-shoot, Resound. When Black Science Orchestra`s Danny Arno and Bang The Party`s Leslie Lawrence originally produced these two tunes, they were the sole UK offerings on the showcase, surrounded by legends, the likes of Todd Terry, Ralph Rosario, DJ Pierre and Armando, from Chicago and New York. Give It Up is a sexy vamp that brings to mind both Robert Owens` Bring Down The Walls and Gerald`s Emotions Electric, while the ringing and sharply sequenced Bassin` resembles L.E. Bass` sought-after Strive.

Back in 1990 another UK compilation series that snuck in homegrown talent – Trojan horse style – alongside big stateside names was Network`s Bio Rhythm. Subtitled “Dance Music With Bleeps” the two volumes put pioneering producers such as Dave Lee (Energise), Mark Gamble (Rhythmatic), Mark Archer and Chris Peat (Nexus 21), Richard H. Kirk and Robert Gordon (Xon), up against innovators from Detroit (Mark Kinchin, Derrick May, Neal Howard, Jay Denham), Chicago (Derrick Carter, Chris Nazuka), and New York (Victor Simonelli). Thirty years later the third installment hit the shops, initially with some issues over the artwork – by Trevor Jackson – now thankfully resolved. All of the tracks, bar a remix of Neal Howard`s Indulge, were born in Britain, and I think most of them are “old”, archival gear. Mark Archer has a hand in nearly all of my favourites – from C&M Connection’s synths, strings and spin-backs, and Nexus 21`s serious subs, to the classy polished, Motor City homage, The Presence Of Beauty, released under his own name. The latter, complex, layered, but not cluttered, uplifting and lighter than air. In contrast Peter “Doggy” Duggal`s  Neurosilence comes from somewhere a shade darker, not dissimilar to Gerald`s Trip City, stripped back and tribal, with tapping, snapping snares, acidic belches and squelches and a sinister , eerie, synth line.

Steve Pickton and Dave Biggs continued to work through Steve`s archives, issuing Stasis` Rare & Unreleased Volume 1, completing a trio, so far, of fantastic 12s on their  Fencepiece Records. Artifax starts out icy, ambient intro`d, cold out amongst the stars, soon to be warmed by symphonic orchestration, and a groovily gurgling TB-303. Occasions & Adventures merges musical marvels such as Mayday`s Wiggin and Rhythim Is Rhythim`s Icon, with sheer, crystalline deep space strings and a wonderfully wobbly wonky b-line.

Stasis` Artifax first appeared in 1993, on Likemind – the highly respected but short-lived mid-90s label run by Paul Smith, which has thankfully been revived. The track shared the imprint`s debut release with music from Nurmad Jusat, aka Nuron. Some of Nurmad`s work as both Nuron and Fugue could be found collected on Likemind 06 this year. The eight tracks date from 93 to 96, but are totally timeless. Racing, rushing, with the urgency of life yet somehow conveying a deep, meditative calm. A sci-fi serenity. An alien ambience. Brilliant and beautiful. Representing a golden age of electronic “dance” music, of enthusiasm and innovation, that`s perhaps unlikely to be repeated. Rhythms and counter rhythms synergise, forming intricate funky flows. A complexity likely influenced by jazz / fusion. These delicate, detailed flickering drum patterns themselves a source of inspiration for folks such as Photek and LTJ Bukem, while the bass-lines owe a debt to dub. Busy with syncopated circuitry chatter, beneath moving, emotional, melodies and hushed ethereal computerized harmonies. Introspective rollers, suitable sunrise or sunset soundtracks. Tura`s Reishi by Tura – an alias of Andy Turner from Black Dog / Plaid – for example, from 1994`s Likethemes, was a Jose Padilla favourite. Nurmad`s music has also started to appear on De:tuned, which is another label you need to keep an eagle eye on if you’re into this sort of stuff.

The collaborative dance-floor focused reissue initiative – Mixed Signals – continued apace. The partnership of Ontario’s Seance Centre and California’s Smiling C released three 12s in the first half of 2021. MS06 remastered missives from New York production duo, Lamar Thomas and Judy Taylor. Rescuing the results of 1987 sessions the pair completed with the very able assistance of the legendary Patrick Adams. MS07 moved to Chicago and the machine-driven rap of Me & E. Inspired by Art Of Noise and Kraftwerk, and built on Roland`s budget silver boxes. MS08 contained a quartet of turn of the millennium cuts from “electronic iconoclast” Dennis “Dr. Wize” Weisse, and his collective, Corps Of Discovery, sampling the more psychedelic side of rave.

Another Seance Centre off-shoot – Aural Medium – cherry-picked from the archives of Zaheer Gulamhusein aka XVARR and his TWIN WOMB studios. Transitional Being provides a taste of a decade`s worth of sonic spells, woven from snares, synthetic strings and sub-bass, and inspired by the late magician, Andrew Chumbley`s Crooked Path. Running Out Of Time in particular is a flickering “trancer”, owing something to UR`s Star Dancer, which of course itself celebrates Mr. Fingers` Stars. 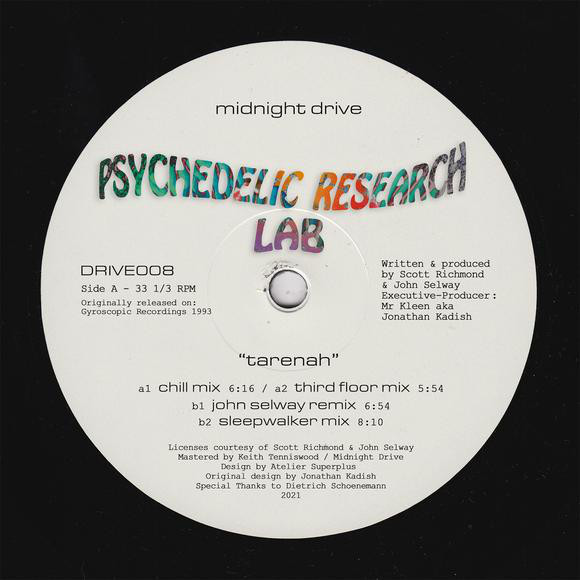 Staying with the trancier side of things, Midnight Drive made available Psychedelic Research Lab`s Tarenah on a remastered 12. Featuring four versions, that range from beatless, mind-bending, TB-303 fractals to tribally-tinged progressive house, the Chill Mix, was a sunset-slipping-into-twilight favourite of Jose Padilla at Ibiza`s Cafe del Mar, and so an essential purchase for any Balearic aficionado not lucky enough to have a copy of the 1993 original.

Transmigration, the people responsible for reissuing Susumu Yokota`s highly prized Ebi sides, pressed up repros of Projective Vision`s Apocalypse / Change. Originally released in 1994 on the eclectic Holistic Recordings, the a-side is a mad uptempo thing. The flip, however, is slow and ceremonial, a thirteen minute epic. An ever-evolving march, with the odd military drum roll, that sounds like Craig Leon`s alien spirituals, songs of the Nommos, with added acid. 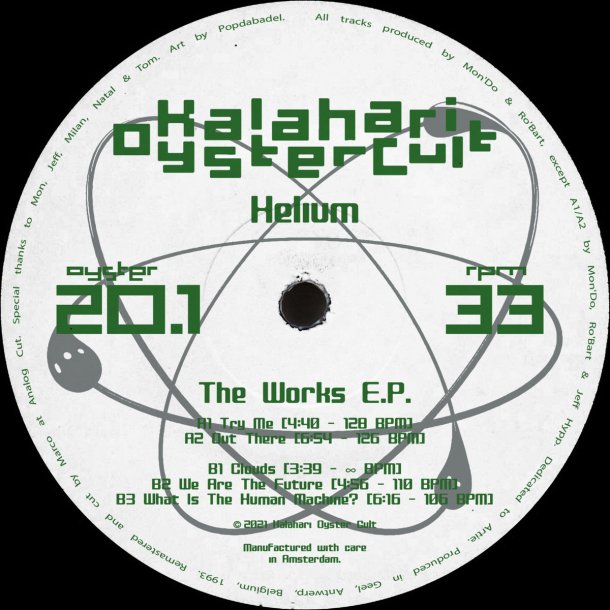 Helium’s The Works was / is a varied 5-tracker licensed from Belgian label Round & Round by The Netherlands` Kalahari Oyster Cult. What Is The Human Machine? criss-crosses computerized fanfares and choirs over a filtered James Brown / Clyde Stubblefield Funky Drummer loop. Its cascading keys eventually falling to an acidic skank. We Are The Future fuses the same vocal sample as the one featured in Jam & Spoon`s dub remix of Moby`s Go with fluffy, floating frequencies and pan-pipe-like synths, while drums crash like waves against breakers. The effect is somewhere in between Tangerine Dream`s Love On A Real Train and the Art Of Noise.