Flying the party took place every Saturday night. At the Soho Theatre Club, on Falconberg Court. Behind the now demolished Astoria (home of The Trip). Off Charing Cross Road. The first time Jo and I went there, we spent thirty minutes in the wrong queue. For the rave next door. Before we noticed people leaving the street though a little unmarked entrance. We went every weekend for at least a year. Through 1990 and `91. Towards the end, alternating between there and Ophelia at The Gardening Club. Flying for us became one of those places that I guess all club-goers have. Where a night out felt like a night spent with family. And you felt like you had to go every Saturday, or else you`d miss the best night of your life. It was small. Two hundred people tops. One room. With an alley out back where you could chill and chat. It was always packed. And everyone was at least a nodding acquaintance. My amphetamine use had turned me into a nutcase resembling Jimmy from Quadrophenia and Flying was my equivalent of the club at the beginning of the film. High-Heeled Sneakers swapped for Eren`s bootleg of Frankie & Candi. I have to admit that I find it hard to watch Quadrophenia now. And Drugstore Cowboy. At the time I thought the protagonists were normal. 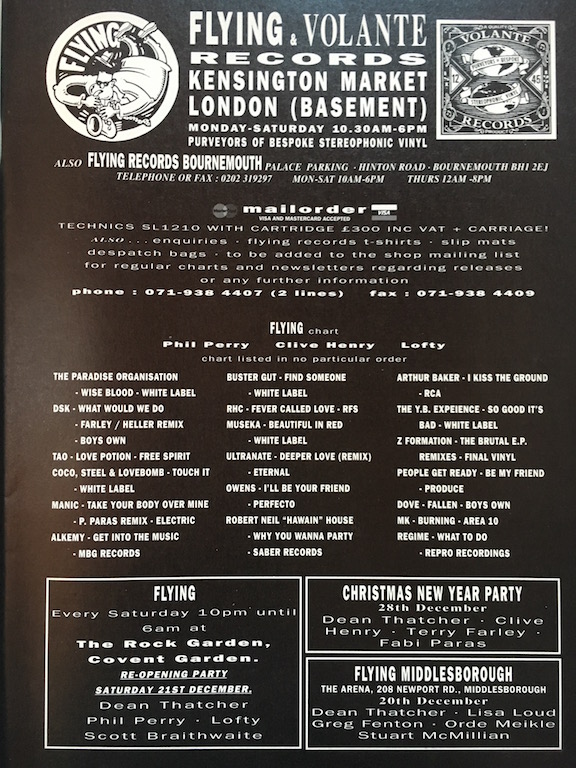 Flying took the Boy`s Own dressed up aesthetic. And much of their playlist. But didn’t concern itself with being cool. At all. It went off. Every weekend. The tunes here reflect that. It was the home of the Italian Scream-Up. The scream continuing through Sunday. Taking over El Metro`s in Hammersmith. The invites for which Karen and Charlie handed out to the most “enthusiastic” partiers on Saturday. And Phil Perry`s Full Circle in Colnbrook. 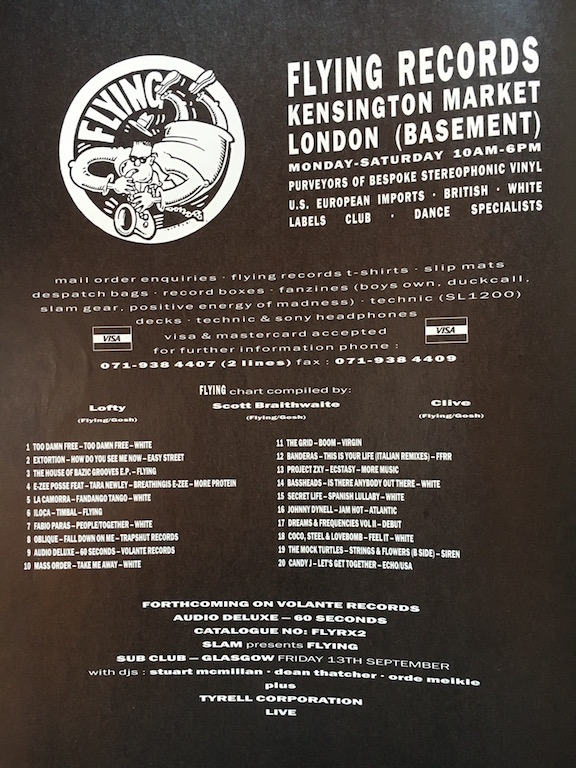 The resident DJs at Flying the party – Dean Thatcher, Brandon Block, Lofty and Rocky – were also in charge of manning Flying the shop. Starting out in the basement of Kensington Market. The market was place we`d hit for years for second-hand clothes. Demob suits, dress shirts, waistcoats, work boots, cravats, ties, and hats. Fiona and Fran were upstairs at Sign Of The Times. It`s hard to imagine now but record shops in the late 1980s / early `90s were intimidating places. Full of etiquette and codes. That`s perhaps putting it politely. It was male animals in a male habitat. Manoeuvring for higher positions within the pack. There was a lot of egos, attitude, and piss-taking. Where the staff assumed alpha status. It was a sellers market. They had the gear and we needed it. And they knew it. Entering a shop for the first time was like walking into a wild west saloon. Or that pub in American Werewolf. Where everything stops and everyone turns and stares. If you quickly hid yourself by pretending to flick thought the nearest rack – despite having a list in your pocket of exactly what you wanted – the guys behind the counter would nudge each other. Readying for the game. The list by the way – you could never actually pull it out of your pocket and simply show them – you would have to memorise it. If you went up to a counter and asked for the wrong thing. They`d laugh you off the premises. The whole shop joining in chorus. If you asked for the right thing, but your face wasn`t familiar you`d get a

If the record you were after happened to be playing on the shop turntable, it`d be

Steve Lee`s Future, Black Market, Bluebird, Quaff. Trax was a law unto itself. Luckily I`d “bonded” with Oscar. Both of us worse for wear one Christmas. In a toilet in Windsor. Each shop had their own regulars. Their own crowd. I got knocked back so often that I began to suspect that a lot of the tunes – cribbed from Boy`s Own and Terry Farley`s reviews in ID – had been made up. By the late `90s this had all changed. The climate harder, more competitive. More  records, more copies, more shops, more choice. And higher rents. The shops realised that turning the Teds away was no longer a business model.

Flying carried a bit of this air – the only promos I ever came out were the ones that Dean had produced or remixed – but they recognised me and I did always manage to bag something I was after. On Fridays when the distro man with the van would arrive, a who’s who of Balearic rammed the counter. DJs adding new releases for Saturday night to their piles of vinyl. Raising their hands for copies of what was spinning, as if at a cattle auction. It was a spectacle that needed to be witnessed. But a nobody like me could forget about trying to buy anything. Just grab a bottled beer and watch. 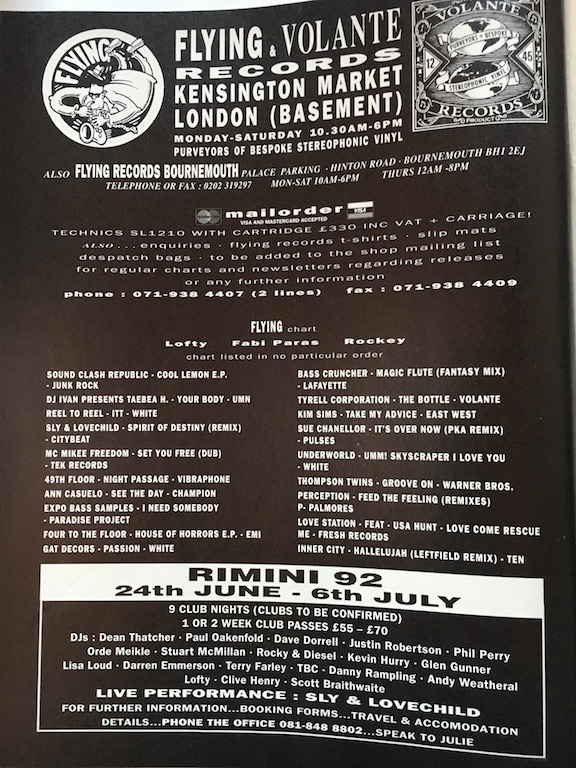 The shop produced a weekly newsletter. Listing best sellers and recommendations.  These, in retrospect, defined a “Flying Sound”. And a moment in time. One when we were still kind of innocent. I wish Id kept them. A couple of years ago I contacted Rocky and Dean to see if they had any. To no avail. Then put out a general call on the internet. I cribbed the music below from those I received, and records that I know I heard or bought there.

Thank you to Martin Wason for the newsletters. If anyone has any more please get in touch.

Some of these records, I had trashed, lost, or sold. So I called in assistance from Italian House legend Leo Mas. Grazie mille to Leo for helping to locate the tunes.

Anybody interested in the history here should check the recently launched Boy`s Own site. 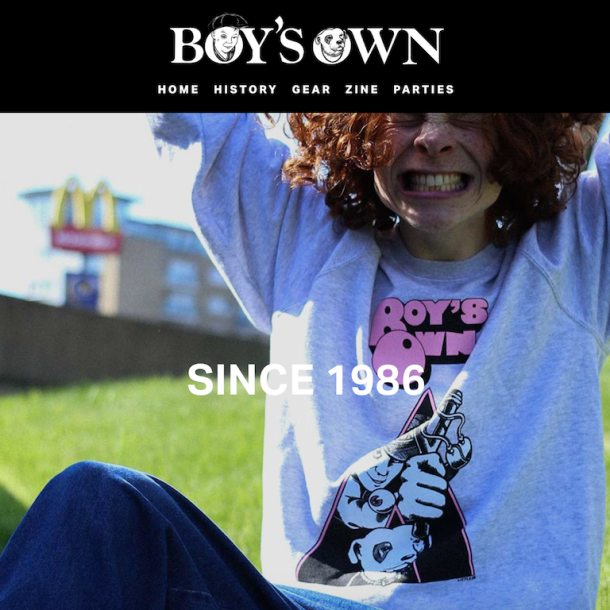 True Faith – Take Me Away

D Rail – Bring It On Down