I once had the pleasure of interviewing the lovely Lady Ray. Moonboots kindly set it up. Misleading Brenda by assuring her I was a perfect gent. But we only travelled about a third of the way through her musical life. So the interview remains unpublished.

Through charmingly cryptic answers Brenda described a childhood listening to everything from Bollywood, Asha Bhosle, Lata Mangeshkar, to Burt Bacharach, Hubert Laws` The Rite Of Spring and Percy Faith`s Theme From A Summer Place. Her older brother and sister playing Otilee Patterson, Barker & Bilk, Buddy Holly, The Everlys, The Beatles and The Carpenters. Wowing to the sonic experiments of Joe Meek. Dancing to Mod Soul.

Brenda described her sound as “Whizzo cranked-up Shangri-Las” and “the Reggae album Laurie Anderson never made”. Which is perfect. When forced to pick a favourite of her own recordings, she went for Hearts Entwine. The productions that she said she would have liked to have been responsible for were Julee Cruise`s Into The Night and Prince`s Sometimes It Snows In April. Her favourite place was sitting at an all-analogue desk for a final mix-down.

When I asked her about Art, Brenda talked about Giorgio de Chirico, The Singh Twins, Gertrude Moore, Paul Klee, Magritte`s The Voice Of The Winds. The films of Luis Buñuel, David Lynch, Johns Walters and Woo. When asked about the music she enjoyed, Brenda`s eclectic tastes brought in a list that included Lambert, Hendricks & Bavan, Shirley Scott`s One For Me, Assif Tsahar, Susie Ibarra, King Tubby Meets Rockers Uptown, Peggy Lee`s Is That All There Is, Horace Silver`s In Pursuit Of The 27th Man, Ornette Coleman`s Science Fiction and Dancin’ In Your Head, Ernest Ranglin`s Below The Bassline, Archie Shepp & Marion Brown, Michael White`s Land Of Spirit and Light, Brother Jack McDuff`s Moon Rappin`, Bobby Hutcherson. And that was just the start. Brenda`s “Three For Sunset” mixed Sun Ra`s Cosmic Rays with Alice Coltrane`s Journey Into Satchidananda and The Chordettes` Drifting Back To Dreamland. Her “Party Starters” were Stanton Moore`s Fallin` Off The Floor, Eddie Harris` Get On Up And Dance, Mac Thornhill`s Who’s Gonna Ease The Pressure, Yello`s The Race.

I compared Brenda`s music to that of Martin Denny and Arthur Lyman. She said she had`t heard of either of them. But the Exotica is there. From 1986`s Tall Dark Stranger to this new E.P. Digi Drifts combining the eccentric Roots and Lovers Rock of Brenda`s Walatta with the particular Pop of her Shellfish Samba, Mandarin Mooch and Theme From Another Space. Flute. A fizz of dubbed-out percussion. Skanking keys. Strings, sighs and wordless harmony. Brenda`s beloved “shimmering top end”. The music winking sexily. Whispering pillow talk. A late Summer`s night dream. The first two tracks exuding a definite dusk ambience. The more urgent Skip Hop To Bop moves slinky. Like House with its kick stripped away. Scat vocals. Melodica. A lullaby on vibes. Echoing Ennio Morricone`s poignant cinematic pocket watch chimes.

Digital is available directly from Brenda here. The aficionados at Aficionado have done the decent thing and pressed up the vinyl. 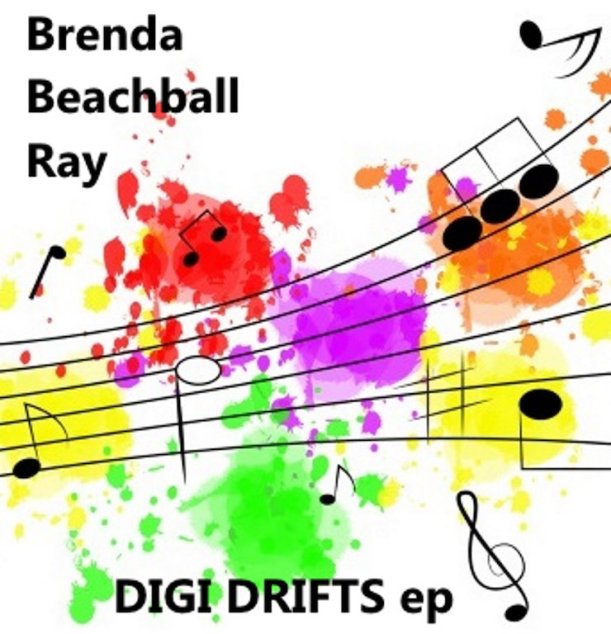 Theme From Another Space