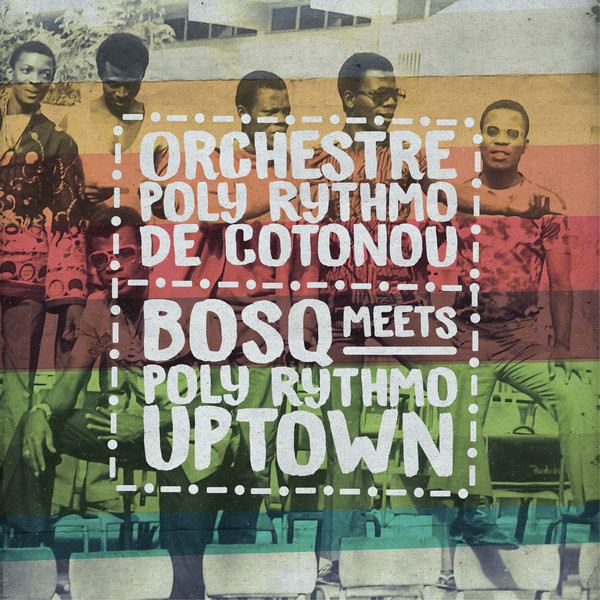 Benin`s Orchestre Poly Rythmo De Cotonou have been playing and recording for nearly five decades. Combining West Africa`s Voodoo rhythms of the spirits with Pop and Psychedelia. They released hundreds of records in their own continent before being rediscovered by everywhere else via sublime compilations on Soundway and Analog Africa. Described as “the best Funk band in the world”, their name is often preceded by the justified prefix. T.P. “Tout Puissant”. “All mighty”.

As part of the gearing up for the Orchestre`s Golden Jubilee, Washington D.C.`s Sol Power Sound have licensed four classic tracks from the Orchestre`s late 1970s and early 1980s catalogue. Bringing in sometime Whiskey Baron, former Boston-ite, Bosq, to re-work them. Bosq, now based in in Medellin, Colombia, has obviously slightly straightened the grooves for DJs. Dropped hypnotic wah-wah riffs and horns into dubwise. Bolstered bass-lines. Set the tunes jumping for 21st Century dance floors. But he`s also emphasised the music`s similarities with that of contemporary and neighbour, Fela Kuti.

The E.P.`s been getting a lot of play on promo, and luckily, founding member, and lead singer, Vincent Ahehehinnou, found time to answer a few questions.

When was the band formed?

Why did you form the band?

How many members were there originally?

Are you still based in Benin?

Yes, we are sill in Benin.

How many band members, in total, do you think have been in the band? 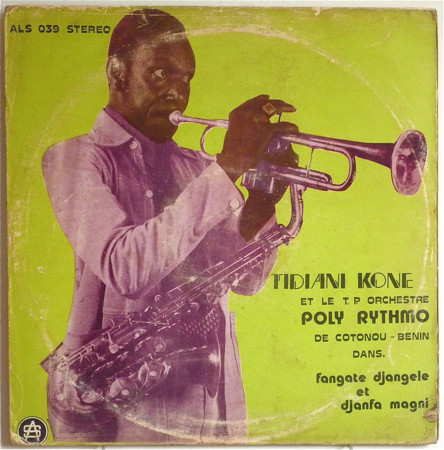 How do you recruit new members?

In our country every Orchestre plays our, Poly Rythmo`s, musical repertory. And we know the best of them. That makes it easy for us to recruit new band members to replace those who pass away.

Is membership something that runs from father to son? Is it a “family affair”?

You`ve been described as one of the top Funk bands in the world. How would you describe the music that you play?

The music we play is a mix of Funk and Voodoo sounds. That is why we call it “Voodoo Funk”.

Who were your biggest musical influences when you started out?

In our early years we were under the influence of James Brown, Otis Redding, Johnny Halliday, and The Beatles. Popular acts of of that time.

You actively tour. Do you pick up and incorporate new musical influences on your travels?

No. In the beginning we picked different influences to make our own music. It has not changed since then.

Who are your current favourite bands?

We love every one who makes good music. We don`t have any specific preference. 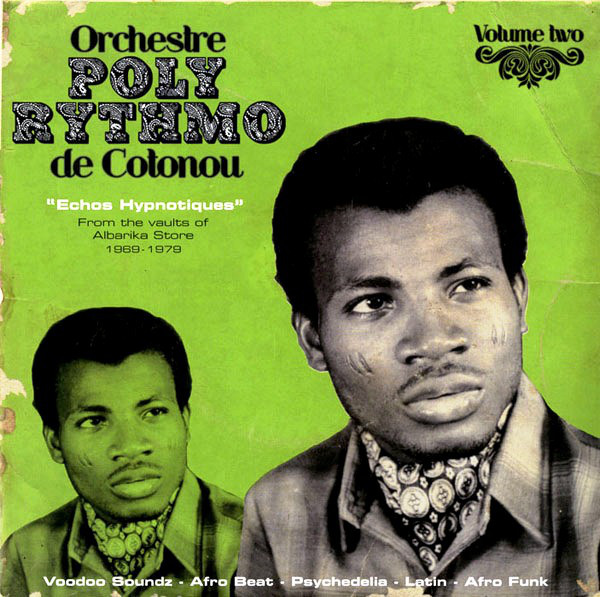 How did you meet and come to record for Adissa Seidou?

Adissa Seidou was pursuing us for a very long time. Trying to get us to record for him. He wanted us to reinterpret a song by Melome Clements song, Angelina. Which was recorded by a businessman in Porto Novo in 1977. It was by chasing this song that he came across the “gold mine”, Gbeti Madjro. He made a fortune with that song. That`s how Adissa Seidou became our publisher.

How did you find yourselves in the same Lagos studios as those used by Fela Kuti?

Adissa Seidou was a businessman and he knew Lagos very well. He brought us to the EMI studio were Fela was recording. I think it was a random encounter, nothing planed.

How did the recordings with Angelique Kidjo and Gnonnas Pedro come about?

Pedro had already passed away. Our editor wanted us to remember and celebrate him by reinterpreting one of his songs. Unfortunately were not in the studio when Angelique came to record her vocals.

Can you tell me about your tours of Angola and Libya?

Our revolutionary  Government sent us to those two countries.. In Lybia at the Youth Festival in 1982 and in Angola to bring show our compassion to the people of a country at war.

You released hundreds of records between 1973 and 1987, but then stopped. Was there a reason for this? Was this due to the dictatorship of Mathieu Kerekon?

Yes, the dictatorship slowed down everything. Our freedom was restricted.

Since then you`ve only released three new albums – 2007`s Nouvelle Formule, 2011`s Cotonou Club, and 2016`s Madjafalao. Can we expect new recordings in the future?

We will keep recording as long as we are alive. That’s what we do. In 2018 we are celebrating 50 years of success.. For this occasion a new album will be released, and why not a “Best of”? 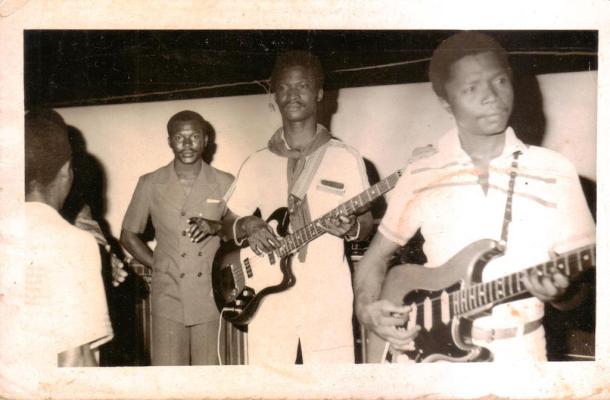 How did you meet Elodie Maillot? How important was this meeting to your continued success?

Meeting with Elodie Maillot was pure random luck. She came to Cotonou hoping to meet one of the band members to ask questions about this band that she loved so much. That’s how we came to meet her. She decided then to produce us. It was a great twist in our lives and our musical career.

How did the initial compilation with Miles Cleret`s Soundway come about?

We don`t know Soundway so well. They are publishers that send their experts to Africa to dig into the music from the `60s and `70s.

How did the subsequent compilations with Samy Ben Redjeb`s Analog Africa happen?

Samy came to Cotonou a lot, to meet with us. We believe that his work has been very important to our existence. He spreads our music through the world. He has published a tremendous Orchestre Poly Rythmo compilation. He is the one that knows us and our music the most. He is like a brother to us. 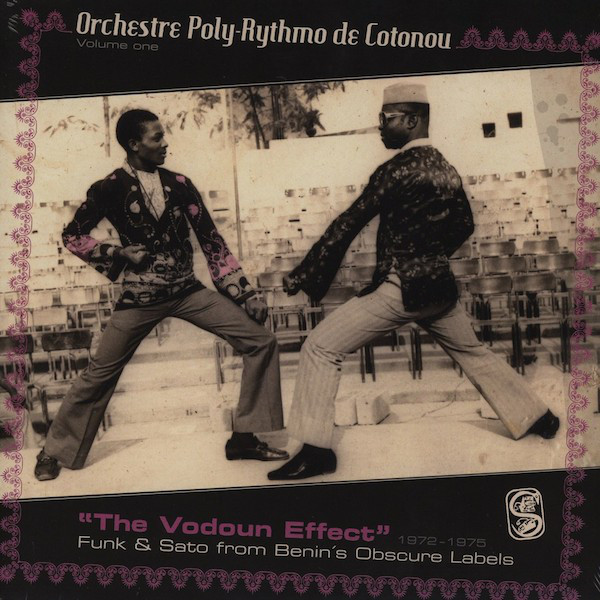 How did you hook up with Sol Power Sound?

Our manager introduced us to the work of Sol Power Sound. He was looking for DJs and connoisseurs of our music to work with. They did a wonderful job remixing few songs from our latest album Madjafalao. So we licensed them a few classic tracks try out.

What do you think of Bosq`s re-works? Have you met Bosq?

We haven`t met Bosq yet, but we hope to meet him and everyone else in the crew of Sol Power Sound. The re-works are genius. Bosq wrapped our music  up with his talent. The results are excellent.

Do you have any up coming tours?

We have scheduled some great performances for the upcoming year. This is our 50th year and we are going to celebrate!!!!!