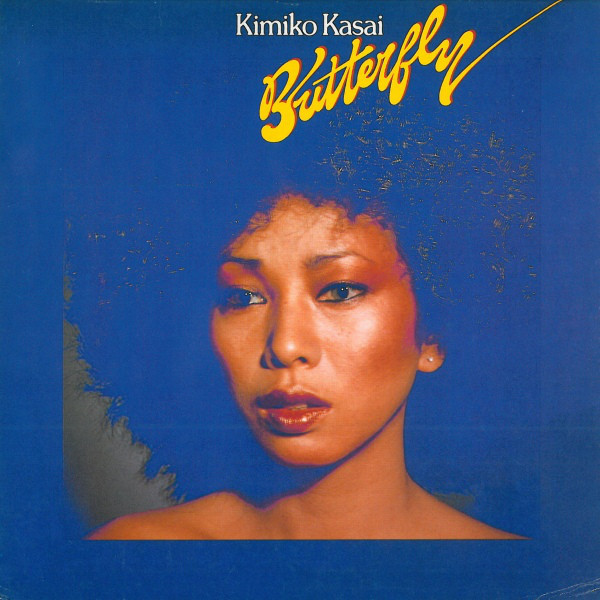 Kimiko Kasai is a legend in the world of Japanese Jazz. One of the first ladies of the country`s Jazz scene. Over a thirty year career Kimiko recorded and performed with not only the cream of Japan`s musicians but also international “names” such as Paulinho Da Costa, Gil Evans, Stan Getz, Lee Konitz, Ted Macero, and Mal Waldron. From the nascent Post-World War II beginnings of Japanese Jazz through to the City Pop of the nation`s 1980s economic bubble. My wife, who is far more polite than I, might describe Kasai-san as a national treasure.

Much of Kimiko`s work was released only in Japan but nonetheless has produced highly sought-after Jazz Dance and Rare Groove classics. “Use Me”, “Love Celebration”, “Mmm Mmm Good”, “I Thought It Was You”. The latter a Herbie Hancock cover, recorded with Herbie himself. Taken from the 1979 LP, “Butterfly”, which Be With Records have just – somewhat miraculously – reissued.

I live in Santa Monica, California, in the US.

I was born and brought up in Kyoto, but lived in Tokyo from the age of sixteen.

When and why did you move to America?

To learn from a wonderful voice teacher, and also to become fluent in English I moved to the US in 1978.

When did you first discover that you can sing?

I just love singing. I have never thought that I have a talent.

Do you play any instruments?

I tried a little bit in the past, but nowadays I don`t play any instruments.

I was thirteen, studying at home in Kyoto, when I heard Chris Connor’s All About Ronnie on the radio. It felt like an electric shock.

When you first started were there particular artists that you drew inspiration from?

I`ve been influenced by every singer with talent and character, but I listened to Carmen McRae intensely.

When and where were your first live performances?

This question is difficult to answer since I was singing in clubs for many years as a “nameless club singer”. When people started coming to hear me sing specifically, it was at a Jazz club called JUNK, in Ginza. In the 1960s.

What was the Jazz scene like during the 1970s in Japan? It seems to have been an incredibly exciting and creative time.

It was indeed! Night after night, musicians would gather in clubs, and sessions start. American musicians would also come by, after performing in concerts, and sit in. The time was filled with a love and desire for Jazz.

Where were the best, most important Jazz clubs in Japan?

How did your first recordings come about?

My very first recording was before I had a record contract. The pianist, Yuzuru Sera, and I worked together on a Bossa Nova album.

What was it like to record for legendary Japanese label Three Blind Mice?

I think the album was made for another record company. Some years later, it was bought by Three Blind Mice.

Japan is traditionally a very patriarchal society. Was it difficult for a woman to succeed in the country`s music industry?

Leaving the women story aside, Jazz itself was hardly recognised. Only  through patience, much effort and a lot of practice were we able to reach a brighter future. I was very lucky with both my musician friends and manager.

Was there any rivalry between yourself and other female Japanese Jazz vocalists?

I never belonged to a group. I just pursued my own way. So, nothing like that , no (laughs).

You must have seen many changes as Japan moved from Post-War austerity to the 1980s economic bubble?

It is true that a lot happened over these years. I was however deeply absorbed in music every day. There was no time or energy for me to analyse other things.

Sure. There are many. The recording with Gil Evans was my first work since I signed exclusively with CBS / Sony. It was super intense. The entire orchestra, me, engineers and everybody else, waited for an hour and a half for Gil to turn up. Gil arrived, apologising for being late, and distributed his freshly created music scores. It was analogue recording then. We tried tuning a couple of times, and then with all the excitement, we just went for it. Things were simple and basic then …

Can you tell me more about the Butterfly Sessions with Herbie Hancock? Where did the recording take place? How did the collaboration come about? What was Herbie like to work with? How did you pick the songs for the recording?

The selections were made by three people: Sony director / producer David Rubinson, Herbie and me. Herbie’s band was coming to Japan, and hence the opportunity for this recording came up. The music was, of course, amazing. I had goose-bumps because their expression was so rich. Herbie was spiritual. He invited me to joined his ritual prayer before recording. I`m still grateful for that experience.

Were you surprised by the request to reissue Butterfly?

Yes, I was somewhat surprised because many years have gone by since I stopped performing.

Why did you stop recording and performing in the mid 80s?

Many reasons, but I had been performing for thirty years. Every day, 365 days a year, morning and evening I was training my voice. I needed to make a change. Also I may have burned out after those very rich thirty years of listening to and sharing live Jazz. In Japan there is a phrase 終わりの美学 / owari no bigaku, which means “Beautiful End”. Quietly I put a “full stop” to my all musical activities.

Are there any musicians that you would have liked to work with?

An arranger called Claus Ogermann. His City Scape is one of my forever favourites. I am still listening to it.

When I was active as a musician, I had a lot of friends who were photographers or art directors. I was intrigued by their creativity. I wasn`t particularly into jewellery, but as they are small “creations” they attracted me. However, I finished that project two years ago.

Do you still visit Japan?

Of course. I am still attracted by the beauty of all four of Japan’s seasons.

Thank you very much for you time.

Can I please say “Thank you” to the translator?

Kimiko Kasai`s Butterfly is finally available for the world to own on Be With Records. You can purchase a copy directly here.