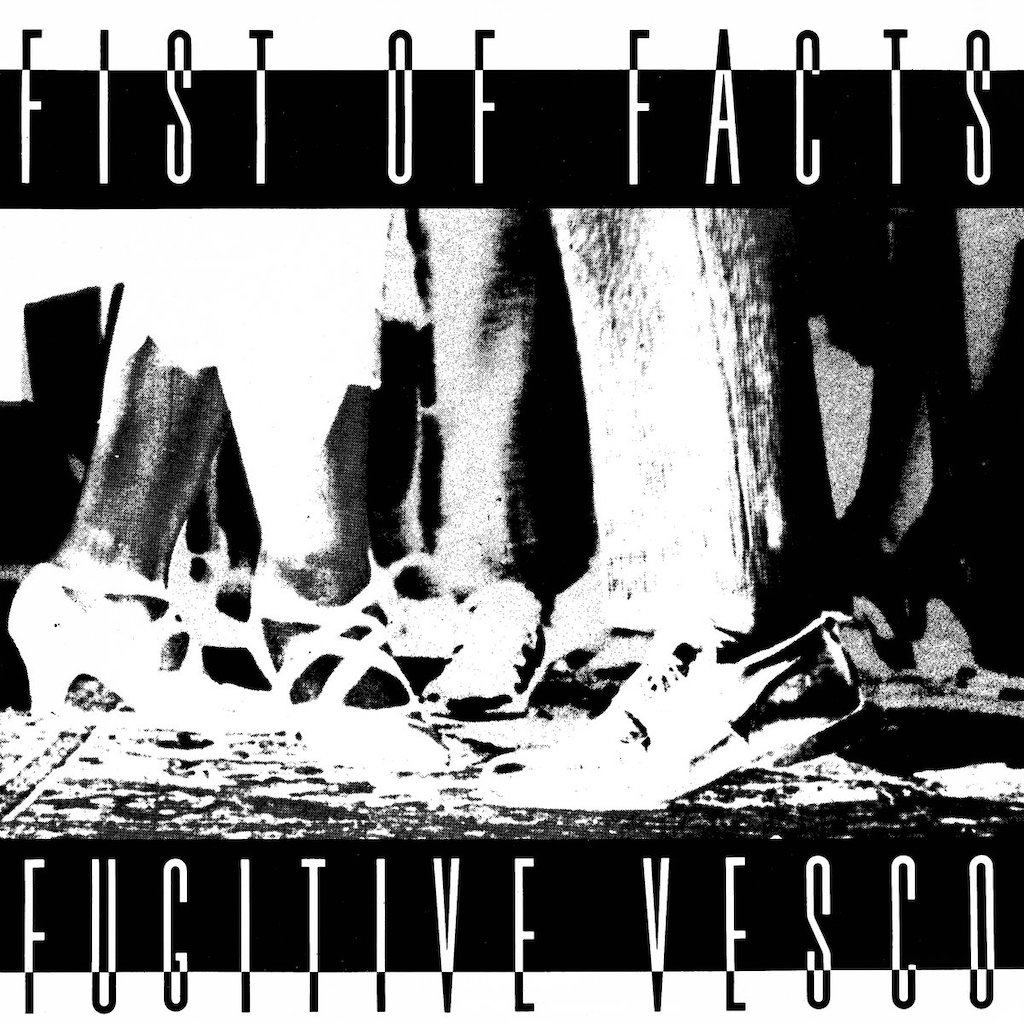 Fist Of Facts was a project born, in around 1983, out of the break up of seminal NYC percussive Punk Funkers, Liquid Liquid. A split brought on by the shady shenanigans around Sugarhill Records` “use” of the Liquids` track, Cavern, for The Furious Five`s global smash, White Lines. No one`s saying much these days, but you can bet The Liquids, and their label, 99 records, never got paid.

Fist Of Facts was essentially the duo of Salvatore Principato, and Ken “Man” Caldeira. Assisted by Caldeira`s IBM AT computer, 0.5 MB of RAM, and some Voyetra software. Though recordings and performances would sometimes expand to contain up to nine players, and include downtown names such as Mark Cunningham from Mars, Felice Rosser, Genevieve De Monvel Boutet, Carlos Vivanco, Scott Hartley from The Liquids. Their sole E.P., Fugitive Vesco, was released in 1988 on Geneva-based imprint, Helvete Underground, run by “scene-sters” Catherine and Nicolas Ceresole. The title track taking its inspiration from the then Cuban-based US exile, financial fraudster, and Nixon affiliate, Robert Lee Vesco. The music, fusing Liquid Liquid`s elemental – stick on skin, stick on stick, stick on metal – Funk, with machines, and more directly political lyrics.

Fist Of Facts eventually folded, as Caldeira pursued a career in Environmental Science, and Principato found himself more involved in event organization and promotion – primarily for visiting African and Caribbean artists.

It was a Moton bootleg that introduced me to Fugitive Vesco, back in 1999 (a Moton overview from me is well overdue – since the label hipped me to so many classics, such as Ed Motta`s Daqui Pro Méier, King Erisson`s Have A Nice Day, and Fela`s Water Get No Enemy). I had no idea what it was. To be honest, I didn’t really learn who Liquid Liquid were until I bought a copy of Carl Craig`s Nitwit, from Croydon`s Big Apple Records, in 1992. Shop owner, John Kennedy, saying “If you like that then you need this”, and passing me a copy of Optimo. Joining those funky dots (is it just me or did Mr. Craig borrow a fragment of The Liquid`s b-line).

It was the marvelous Manchunian gurus, Balearic Mike and Moonboots, who turned me on to the E.P.`s other standout, First Strike. Mike had put the tune on one of his legendary Cosmic Alphonsus mixes (#7, in 2007), and Moon had very kindly provided the ID. Allowing me to order a couple of cheap copies from GEMM (one to play, one to trade), before the secret was out, and prices rocketed. With its big bass, eastern guitar figures, whistling synths, and barked, yelped, vocal, I`d guessed at it being some lost PIL treasure.

**For some reason, I`ve got the track, Meltdown, recorded at 33 rpm. I can`t remember if this was an attempt to copy something I`d heard on a Baldelli tape. But I do know that pitched down, with the brass, it sounds like an Arthur Russell / Peter Zummo / Peter Gordon outtake.

This 2019 Telephone Explosion reissue includes a 7”, which features two tracks not on the original E.P. One I Want is taken from the super obscure Spanish compilation, Trying To Make It To The End Of Century. Released on G3G in 1991. The other, Wawa, was rescued from the archives by Claremont 56, in 2009. Around the time that Salvatore was collaborating with Smith & Mudd, and Holger Czukay, as a member of Bison. Its drums, rockier than on the title cut, crashing through live Dub and delay. The horns, at their intended speed, sounding like Don Cherry.

You can order a copy of the expanded edition of Fugitive Vesco directly from Telephone Explosion.