Mallorquinn guitarist Joan Bibiloni has just had a cool, mini-retrospective E.P. released by NuNorthern Soul. The 12” provides a 5 track snapshot of Bibiloni`s 50 year and 12 solo album career. Collecting music that`s a fusion of influences from mainland Spain to North Africa, and which mixes tradition with technology, folk with new age and jazz. Sometimes up boogieing, sometimes fragile and ambient. Occasionally harboring a political message. Music unavoidably touched by his homeland, the Balearic landscape and climate.

Joan was born in 1952, in the town of Manacor, on Mallorca – the largest of the Balearic Islands. He spent much of his youth in Lluc Alcari, Mallorca`s smallest village, where he was part of the creative community centered around the neighbouring Deia, and a house called Canallun – the family home of poet and author, Robert Graves. The author`s works, such as The White Goddess, made him something of an “icon” to the hippies of the 1960s and `70s. His belief that all religion is based in psychedelic experience – mushrooms in particular – doing a lot to cement his “seer” status. Bringing in “psychic pilgrims” of all shapes and sizes to Canallun – and Joan, then a 20 something budding guitar virtuoso, got to learn his chops jamming with members of bands such as Soft Machine and Gong. It must have been an incredible time – something that I press and probe Joan on here.

I was born in Manacor.  I lived in Lluc Alcari for years…Deia and Palma de Mallorca. I am Mallorquin.

I think you mean where I have my bases now, right? I am back in Manacor. I moved back to help my parents. I had to leave behind my horses and guitars, my kitchen pots. They are too difficult to transport.

What made you pick up a guitar?

When I was around 12 years old I had the flu. My parents brought one up to my bed. It was a Spanish acoustic guitar. There was no budget for an electric one. I did not know how to touch it and I held it in my hands with a certain degree of uncertainty.

Do you come from a musical family?

I don `t think so…My mother would tell me stories about her parents, my grandparents, how they would do traditional folkloric dances. I remember my mother telling me that my grandmother would dance with a glass of water on her head…maybe they were part of a circus?

Do you play any other instruments?

Yes, I have skills with percussion. I think percussion, rhythm, it is essential for music to form, especially a Latin percussion “offbeat”. I am also comfortable with the electric bass, some basic piano. To be honest, with the help of the studio I can handle most instruments.

Did you receive any formal training?

I never had a formal musical education – but I had and have great friends, who have been very good teachers. From these people I have learned a lot. Sometimes just by watching and observing.

Your childhood was spent during Franco`s time. What was the mood like in Spain when he died?

When the dictator died surely there were conflicting feelings. There were some who thought their deal was over, and others who thought “at last!” I am absolutely against any form of dictatorship.

How did you meet the family of Robert Graves?

When I went to live Lluc Alcarien in 1976. I already knew Tomas Graves the Guitar Center in Palma de Mallorca. Robert often came to bathe at Lluc Alcari, and we would pass each other in the street and say “Hello”. Tomas and I became very good friends. Likewise with Robert`s other children, Joan and Lucia. They were more my generation. Many times I found myself in their amphitheatre – watching or taking part in some poetic-musical moment.

How old were you then?

Had you read Robert`s book The White Goddess? I was supposedly very popular amongst “hippies” of the time.

No, I haven’t read it. One of my faults is that I don’t read very much, but hey, I like talking. I really like conversation.

What was The Graves` house, Canallun, like? It`s a museum now.

For me, it was a normal and ordinary house – just like all the houses in Deia at that time.

Was it full of colourful, creative characters?

Again, all the houses of Deia were full of colourful characters. But certainly things happened whenever I visited.

Did you know Mati Klarwein?

Yeah! He was a great guy and a good friend. I liked his hyperrealistic and hallucinogenic painting. We`d throw these percussion parties, which were very popular. Everyone banging on pots and pans!

Who else did you meet there?

Many people, writers, painters, not so many musicians. Bohemians. Many that people who are not famous – and who are probably the most interesting.

Did you know Ramón Farrán?

Yes, we met and we are very good friends.

Did you ever visit his jazz bar, Indigo, in Palma?

By the time I got to The Indigo Club, Ramón was no longer there. The place had been turned into a nightclub / bar.

Ramon recorded an LP, called El Olivo, with the Graves children and based on Robert`s poems. Were you involved in the recording?

No. With Ramón I recorded an LP titled Tabaco. Latin music. It was fun.

Is it true that Ramon taught Robert Wyatt to play the drums?

I know that Ramón informally played with him, showed him stuff. I don’t think Robert went to any formal classes, but you know, inside the informality, you can savor and learn a lot.

Later did you have any involvement with Ramon`s Spanish National Jazz Orchestra?

No. This is a project that he created when he went to live in Madrid. Once, almost by chance, we met in Madrid, but I was not involved in the orchestra.

You were friendly with Daevid Allen and Gilli Smyth. Were you ever a member of Gong?

No, I was never part of Gong – but musically we were first cousins.

Is it true that another Gong member, Didier Malherbe, lived in a cave on the Graves Family grounds?

It sounds very possible to me…but at that time I was “living” in the Guitar Centre in Palma.

Did you ever meet and / or play with Pau Riba?

I met Pau Riba, and again, we are good friends. He and I recorded an album – Licors – at Daevid Allen’s Banana Moon Observatory.

Were you ever a member of Soft Machine?

No, but I played with two of the original components, Daevid and Kevin Ayers.

Did you have any interaction with the musical scenes on the neighbouring islands, Ibiza or Formentera?

Yes, in Eivissa. I would got to Amnesia, when it was still a country house, next to Vara del Rey – and when the music they played was mostly Bob Marley. They also had live music. It was the best club.

At Amnesia, did you ever meet Antonio Escohotado?

Yes, I met him – when friends arranged for Pep Milan and I to go to play there. It was a real pleasure to be in this house.

Would you be able to tell me anything about Antonio?

We were friendly. I knew he came from Madrid, and his attitude was always very respectful. Within his behaviour, there was something of the “aristocrat”, perhaps his Madrid origin … I don’t know …(Escohotado came from a wealthy background, grew up in Brazil, and is now a professor of Sociology and Law, and a respected philosopher). In any case, this aristocratic attitude did not in any way effect our relationship, or his treatment of us – musicians coming to play in Amnesia. Pepe and I visited his house, with several friends, Carlos Agustín, Manolo Diaz…Antonio was always pleasant and he has become one of the great thinkers of the West. He has pointed out definitive ways.

Were there jam sessions at Amnesia?

Yes, sure, but I don’t remember any in particular. This was all part of the package of the times. Surely Manolko Díaz, Henry Maizels, Luís Sangareau, Denis Hermann, and many other people could talk about their jams there. They all still live in Eivissa, and they are still all very good friends. Amnesia, at that time it was THE centre of activity, like the Pereira Bar, or the Guitar Center in Mallorca – a country house, in Eivissa, converted into a club….it gathered all the ingredients.

Did you ever take part in any jam sessions?

It is likely, yes, but as I told you, I don’t remember any in particular. I remember more – without disrespecting the music – the noodles with herbs that they served, I think absolutely vegan, cooked by Aaron and Richard, two New Jersey natives. I ate these noodles, not noticing that the “herb” was marijuana until it was too late. 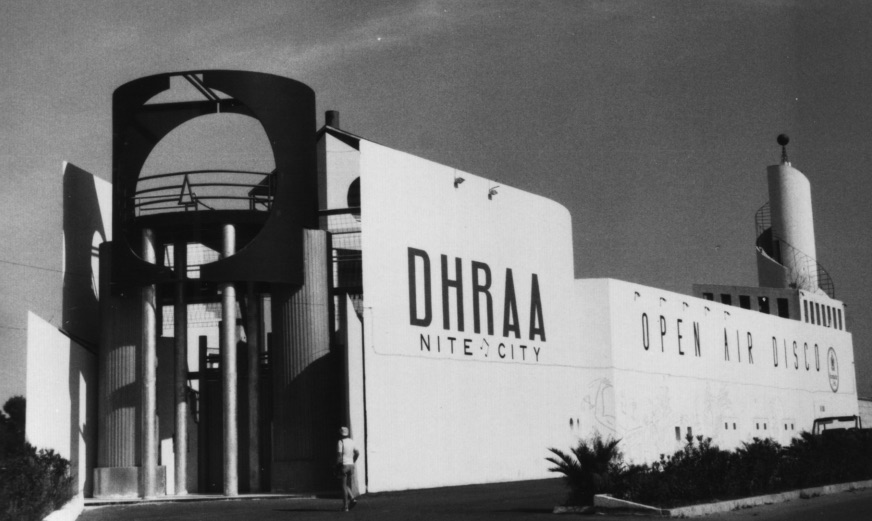 Did you ever visit the Mallorquin club, DHRAA?

Yes, I was there a few times and I even organized several concerts there.

This club seems have been forgotten by the rest of the world.

Probably. It`s in ruins now. I remember when Immaculate Fools played there. I liked this group. The club was very good for live acts.

Can you tell me more about the time you spent away from Mallorca?

All trips or long stays outside of Mallorca, they have been very enriching. The longest was to the USA, San Francisco, then India, and Cuba…I was looking for formulas to cook up musical projects. The truth is that when I was away I longed for Mallorca. These days connections are faster and more precise and perhaps there is not so much need to travel.

Do you think you would ever move away from Mallorca again?

It may be, but the backpack is heavy, and perhaps too much bother. Instead I would rather take her with me.

How has Mallorca influenced the music that you make?

I’m not the best person to say it – it will be an accumulation of things. For sure Mallorca, the islands in general, will have been a big influence… don’t you think?

Are you still making music?

How would you describe the music you are currently making? Jazz, rock, ambient, new age?

Are you also listening to a lot of music at the moment? Would you be able to name for me 3 pieces of music that you’ve recently enjoyed?

Let’s see … Steely Dan, I listened to a live concert, the whole concert. I’ve listened to Debussy and some Bob Marley.

What is the situation like at the moment in Mallorca? Are you locked down?

In all places there are problems. I’m not locked up. To be honest, during this time of confinement I’ve changed my activities very little. Becoming an anchorite…

What are your plans for when the world goes back to “normal”?

That normality – I can’t quite believe it. The world before was not abnormal – subnormal, I think, yes? But hey, it’s all a very serious and transcendent reflection question – one that the human race was not prepared for, and does not seem to feel like addressing. I have been reflecting on this for a long time.

Joan Bibiloni`s Selected Works 1982 to 1989 can be ordered directly from NuNorthern Soul.