Another record from 1996, so 25 years old this year. This one never really leaves the record bag though …

The ‘C’ in question is of course Carl Craig, and here he turns in a completely radical reworking which is among his finest remixes. You could say this was released during Carls ‘Imperial faze’, which probably begins in earnest with the release of the Paperclip People track, Throw, in 1994. Although he’d released some really incredible music before then, Throw is really when his career started to go stratospheric. Subsequently the remix work started to come in. Some of it is a mixed bag, although I have to say there is now a long list of Carl Craig remixes that are some of my favourite dance records. It would be hard to choose an overall favourite, but it usually comes down to either this or his remix of Cesaria Evora’s Angola. Today it’s this.

I got this sent 12 from a mailing list I was still on – Sirkus – in 1996. At first though, I remember I wasn’t quite sure. It`s over ten minutes long, and it starts well, in a chunky techno-meets-hip hop style, but then it has this middle section which lasts about half the length of the mix where it just doesn’t really do anything, it just lulls you to sleep a bit. After a few spins though, that’s it’s real genius, setting you up for the rush of euphoria when it takes off again.

This track got played a lot at the time, but it was at Moonboots and Jason B’s Aficionado night a few years later that it really became a Manchester anthem. When they moved to Zumbar for the second version of ‘Nado – moving from Aqua – and it started to get occasionally rowdy, and people started dancing, Moon would play this until the crowd ‘got it’ as they say. This became the tune that had everyone dancing on tables and chairs on a Sunday night. I started to book Mondays off work. This is the original one-sided UK promo 12”.

I taped this track off the Stu Allen Bus’ Dis show on a Sunday night in 1987. It was absolutely one of the tunes of the year for me. It had such a weird, woozy, funky sound, in no small part due the brilliantly innovative use of the Steve Miller Band’s Fly Like An Eagle sample. This gives it a really psychedelic edge, as well as an absolutely rock-solid groove, which meant that this song completely tore the dance-floor up when it was dropped. I made do with the tape for a good long time, hammering it on my Sony Walkman, but I can remember the day I finally capitulated. It was in November 1987, and the night before I had just seen the 1987 Def Jam Tour at Hammersmith Odeon, with Public Enemy, Eric B & Rakim, and LL Cool J. I walked into the massive HMV Megastore on Oxford Street and was feeling pretty B-Boy at the time! I already had LPs by the 3 acts I’d just seen, so what was I looking for? No Idea! But then I saw this 12. No UK release seemed likely, and the album wasn’t due out anytime soon, so I just thought fuck it! I had already bought a few import 12”s by this point, but it wasn’t something you did lightly. My copy still has the £5.99 HMV price and import stickers stuck inside the sleeve. This was more than some LPs cost back then. Now I can’t buy a pint for that – I like posh beer so kill me!

After the sad news of Biz Markie’s death a few weeks ago I pulled this off the shelves. I used to have his first two albums as well, but they’ve long gone in some ruthless cull. I still have this though, and it still sounds immense. I’ve been playing it every day since. Nobody beats the Biz indeed!

I always think that the golden age of rap was 1986-1990 or thereabouts. Most of my favourite hip hop LPs were released during these years, or so I convince myself. In reality I think it’s just that this period mentioned spans when I was really falling in love with hip hop, at the expense of most other musical forms, and what happens is that slowly, from late 1987 onwards, something else – HOUSE MUSIC ALL NIGHT LONG – is starting to vie for my affections. By around 1989 it had pretty much taken over. However, I’ve recently started to re-evaluate that hypothesis. The `90s produced some of the most incredible and innovative hip hop of all time as well, it’s just that, personally, it was playing second fiddle. Think of all those Gang Starr LPs. Quest LPs, and an incredible amount of new indie hip hop labels like Solesides, Rawkus and Fondle ‘Em. From the Solesides label, which also includes DJ Shadow, Quannum Projects, and Latyrx, this has to be the high-water mark. A completely flawless double album featuring some of the most incredible lyrics over a dazzling array of grooves, and samples. The diversity of the material is incredible – with producer Chief Xcel moving from block party style party beats to spiritual afro-centric jazz – all with the sublime delivery of The Gift Of Gab, and complimented by Lyrics Born, Erinn Anova and Lateef. My copy is the UK Deluxe edition on Mo Wax, with a nice extra outer sleeve housing the gatefold LP, and even nicer bonus disc of instrumentals. This is another record that’s now tinged with sadness since the passing of The Gift Of Gab last month. Fifty is no age to go.

Outside right now it looks like a day in October, rather than the beginning of August, so I needed some audio sunshine to brighten up my mood. Look no further than the opening track on this self-titled LP from Canadian disco artist Georges Thurston’s Boule Noire. Aimes-Tu La Vie Comme Moi? (or Do You Love Life Like Me?) is a wonderful uplifting slice of Balearic funk, with Bill Withers like rhythm guitars, heavy, hip-hop style drums, a throbbing bass-line, plus a joyful French vocal. A combination that`s guaranteed to put a smile on your face and have you heading for the dancefloor for a bit of a Balearic shuffle. I think I bought this record from that softest of rocks, Chris Galloway, in the early days of his Pure Pleasure Music website, although this was probably before the website, as I used to phone him up and he’d play me records down the phone! The brand new Jpye LP on Claremont 56 is on a very similar tip to this track, and after a couple of spins is sounding brilliant, so more of that to come, probably.

I bought this for the b-side, which is another excellent slab of off kilter Gallic funk, this time with the added bonus of some harmonica and wah-wah guitar. It then took me an astonishing amount of time to flip it over and discover the joys of the actual a-side of this German 12”. I’m not exaggerating when I say that more than a decade passed with this in my collection, unplayed, before the realisation dawned on me that I owned a gorgeous, sexy, sleazy French language cover version of the Leo Sayer disco gem. It’s the Leo Sayer tune, but sung in French!!! What’s not to love! Love a bit of foreign muck us Balearic lot! Plus, the sleeve is proper filth, and yet both instructive and helpful as well! It really is “easier to love” if you take your knickers off first, isn’t it! Note to self: Listen to your fucking records properly you muppet! 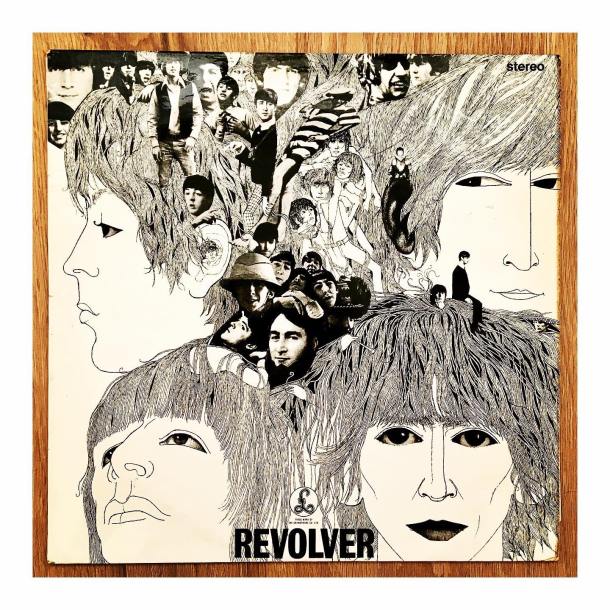 Possibly the greatest pop LP ever made? The Beatles really start cooking on gas for me with the album Help!, and from that point they just get better and better in terms of the songs, their writing, the innovation involved in recording them, and the concepts involved. This LP starts with one of George’s finest moments, Taxman, a riff so good that The Jam nicked it wholesale for Start over a decade later. It goes on to include blissful pop like And Your Bird Can Sing and Good Day Sunshine, a fabulous Stax / Atlantic / Motown pastiche in Got To Get You Into My Life, Hindustani classical music on Love You To, a song so great that The Blow Monkeys singer took his name from it – Doctor Robert, druggy psychedelic pop in I’m Only Sleeping and She Said She Said, a classical octet on Eleanor Rigby, a sing-a-long nursery rhyme in Yellow Submarine, and then one of the most innovative pop records ever made. The album ends with John Lennon’s Tomorrow Never Knows, but it doesn’t really sound like the song John wrote and demoed. It’s the first example in pop of the recording studio becoming one of the musical instruments. The song completely morphed under the input and ideas from the fab four, their producer George Martin and engineer Geoff Emerick. With the use of tape loops, reversed guitars and sitars, processed vocals and lord knows what else, The Beatles recorded a track which sounds like it’s from thirty years into the future – it’s cavernous drum loops pre-empting the sound of stadium dance acts like The Chemical Brothers, The Prodigy, Underworld and Orbital.

If that wasn’t enough, the two tracks culled from the LP sessions and released as a double A-side single are Paperback Writer b/w Rain, which is possibly the best single the band ever released, with maybe only Strawberry Fields b/w Penny Lane coming close – actually, there’s quite a lot of competition. Even the cover is great, designed by their friend from their days in Hamburg, Klaus Voorman, who would go on to play in the Plastic Ono Band. It’s one of my favourite LPs, hence owning both original UK Mono and Stereo pressings…and a few versions on CD.…