I`ve steered a haphazard course through the recording career of Brian Eno. I wasn`t really aware of who Eno was until I heard Deep Blue Day on the Trainspotting soundtrack. Prompting me to seek out the Apollo LP. Produced by Eno with his brother Roger, and frequent collaborator, Daniel Lanois. Then by looking backwards I realised, or took notice of, his credits on records I already owned. Talking Heads` Fear Of Music and Remain In Light. The latter leading to My Life In The Bush Of Ghosts. Those “Berlin” Bowie albums, bought for Sound & Vision and Heroes. U2`s Joshua Tree. The Penguin Cafe Orchestra`s first LP. Mark Seven introduced me to Michael Brook`s Cobalt Blue. When we were all digging Daniele Baldelli`s Cosmic mix-tapes. Trying to come up with Funky Alternatives.

I knew Eno had invented “Ambient”. Later learned the story of the accident, hospital, Judy Nylon, and the album of Eighteenth Century harp music, that inspired it. I also knew from an NME interview with The Orb`s Alex Paterson, that Eno had a hand in Editions E.G. A label where a great deal of this music could be found. It was Ambient that fascinated me. Hearing orchestral ensemble, Instrumental`s cover of Sparrowfall took me to 1976`s Music For Films. I rediscovered Bowie`s Subterraneans via a Balearic / Cafe Del Mar tribute put together by Rocky, Diesel and Ashley Beedle. So back in the years when I`d visit a second-hand record shop every day, Eno`s name was on my list. But my “study” was roundabout, incomplete, and governed by chance. The reissue of Eno`s first four solo albums – remastered as 2 x LPs – has let me listen to the beginning in sequence. Let me try to identify the point where his music changed.

To be honest much of Here Come The Warm Jets sounds like Roxy Music before Eno left them. Taking his VCS3 synthesiser and Revox reel-to-reel with him. Glam Rock caterwauling and thumping. Kinda camp 1950`s Rock & Roll parody. Doo-wop, Bo Diddley rhythms and girl groups via Richard O`Brien`s Rocky Horror Show. But there are Proto-Punk moments. Needles In The Camel`s Eye and the riffing machine-generated noise of Blank Frank. Dead Finks Don`t Talk ends in overdriven distortion that could pass for Adrian Sherwood mixing Nine Inch Nails. In naming the record after the sound he wanted from the guitars (rather than a euphemism for piss) he referenced the working methods of Captain Beefheart. The dark humour of his lyrics echoed those of Beefheart`s mate, Frank Zappa.

On Taking Tiger Mountain (By Strategy) these lyrics become modern nonsense poetry. A combination of Edward Lear – “jellyfish kiss” – and Monty Python in-joking. Self-referential and arch. Eno called it “Idiot Glee”. Inspired by Dada and, in particular, German artist, Kurt Schnitters. The Fat Lady Of Limbourg sounds like Genesis. Eno having provided “Enossification” to the band`s The Lamb Lies Down On Broadway album that same year (`74). Detuned guitars, clattering metallic percussion, and sine waves screaming. The very definition of Art Rock. It does`t sound like anything else on my shelves, but I can hear its influence in others. The True Wheel, electronics squeaking and squirting, gave A Certain Ratio their name. The tile track`s calm, lazy Blues might be the first step towards Ambient.

“Climbing over the stars to the top of Tiger Mountain.”

Another Green World reigns in both the music and the lyrics. They are less affected. With sweeter harmonies. I`ll Come Running is a fairly straight love song. There are also more instrumentals than before. Mediations for piano and treated guitar. Synthesised winds, strings, animal cries and rainforest vibes. The influence of ECM`s Jazz. You can hear the crazy Pop. But it`s as if the drugs have worn off. The energy dissipated. The morning after the morning after the morning after the night before. Head clear. Be Calmed. Sky Saw is tight, taut Funk. Phil Manzanera`s buzzing set against a spiral of building drone. The nightmare landscape painted on In Dark Trees possibly inspiring The Cure`s A Forest. Big Ship stretches a drunken sailor`s squeezebox in time to the bashing of a clockwork monkey`s cymbals. Cogs stuck, broken, repeating. Little Fishes is a child`s mobile turning. Pacifying above a cradle. Stars twinkling, winking. Tom Wait`s Innocent When You Dream. Radiohead`s No Surprises. Spirits Drifting shares Bowie`s Subterranean tones. Bowie enlisted Eno after hearing 1974`s Discreet Music. Eno`s first true Ambient album. The previous LPs tip-toe a fine line between eccentric self-indulgence and genius. With their uniqueness erring towards the later. But Another Green World leaves you in no doubt.

Eno once wrote an essay on the use of the studio as a compositional tool. Before And After Science could be its accompanying audio illustration. A showcase for what the studio can do. Even with only ten tracks selected from the hundred recorded. All genres for the asking. There`s the customary Virginia Plain piano-banging, but No One Receiving is both machine and tribal. Kurt`s Rejoiner is a percussive Punk Funk processor. Here He Comes a Country Ballad. Kings Lead Hat is a New Wave pastiche. The title an anagram of Talking Heads. Eno having produced the band`s second LP, Fear Of Music. His vocal and lyric mimicking singer, David Byrne. Their Psycho Killer becoming “Killer Psycho”, “Killer Hertz”. Julie With drifts on a open sea of backwards chimes. By This River borrows from the Kosmische Pastoral of Harmonia. Eno called Harmonia “the most important Rock band in the world”. In `76 he`d joined them in Forst, Germany, while still working on Before And After Science.

Looking at Wikipedia, Brian Eno has one of those pages that makes me wonder what the fuck I did with my life. His expansive discography demonstrates a super-productivity. Coupled to a vast network of disparate collaborators (Laurie Anderson, Harold Budd, John Cale, Carmel, Johnny Cash, Coldplay, Elvis Costello, Grizzly Bear, Jon Hassell, Jah Wobble, James, Derrick Jarman, Nicholas Jarr, Grace Jones, Laraaji, Jaki Liebzeit, Baba Maal, Michael Nyman, Paul Simon, Ultravox, U2, Robert Wyatt…). Both surely an indicator for an inquisitive and highly active intellect. He has welcomed mistakes as opportunities. Encouraged serendipity. Employing sixteen musicians based on their incompatibility on Here Come The Warm Jets. Designing The Oblique Strategies, or Over One Hundred Worthwhile Dilemmas, with Peter Schmidt. Cards of off-beat suggestions with the aim of breaking creative blocks. Simply getting musicians to swap instruments. He has embraced technology. Pursuing his idea of Generative Music. The possibility of a music that can create itself. Evolve. Towards this end, he developed Frippertronics with King Crimson guitarist, Robert Fripp. An analogue delay unit of two reel-to-reels. He pioneered sampling on My Life In The Bush Of Ghosts. A project driven by the shared enthusiasm of Eno, David Byrne and Jon Hassell. Looping grooves and re-appropriating voices recorded from US radio and World Music albums. Politicians, TV Evangelists, Gospel Singers, Exorcists, and holy men from Lebanon. Always adapting, progressing, pushing forward. Through countless videos, installations, and 77 Million Paintings. To his apps: Bloom, Trope, Scape, and Reflection. The latter finally fulfilling Eno`s wish. For Ambient music to be endless, to unfold like a river, constantly changing. The only “button” being Play / Pause.

You can order copies of these remastered masters here. 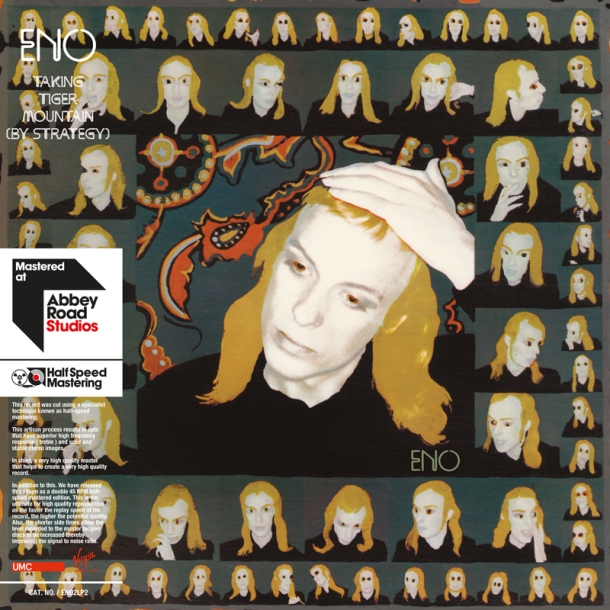 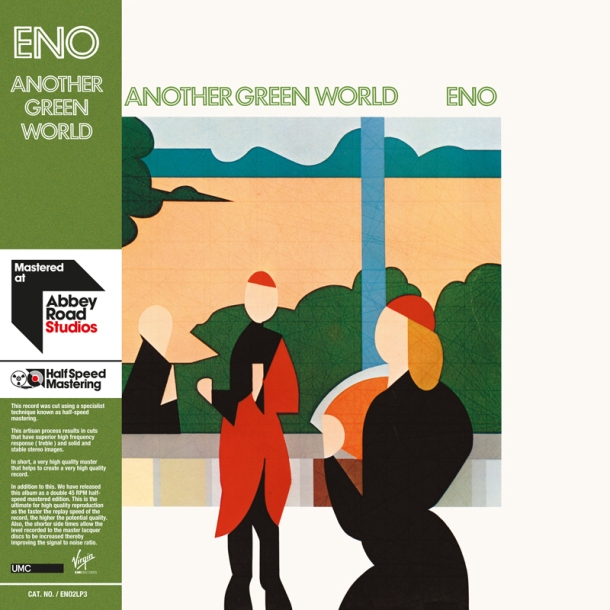 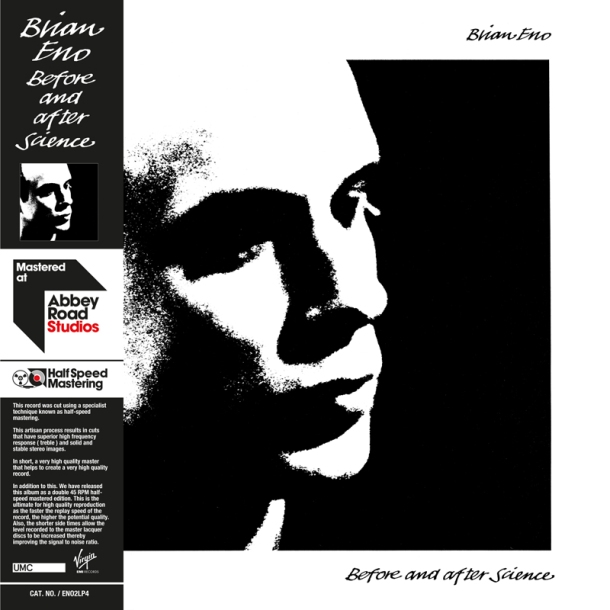 Roxy Music – If There Is Something

Roxy Music – In Every Dream Home A Heartache

Brian Eno – Everything Merges With The Night

Carmel – And I Take It Forgranted

Penguin Cafe Orchestra – The Sound Of Someone You Love Going Away

Talking Heads – Take Me To The River

Brian Eno – No One Receiving

Brian Eno – From The Same Hill

U2 – I Still Haven`t Found What I`m Looking For

5 thoughts on “Eno At The Controls / Here Come The Warm Jets, Taking Tiger Mountain, Another Green World, Before And After Science / UMC – Virgin EMI”