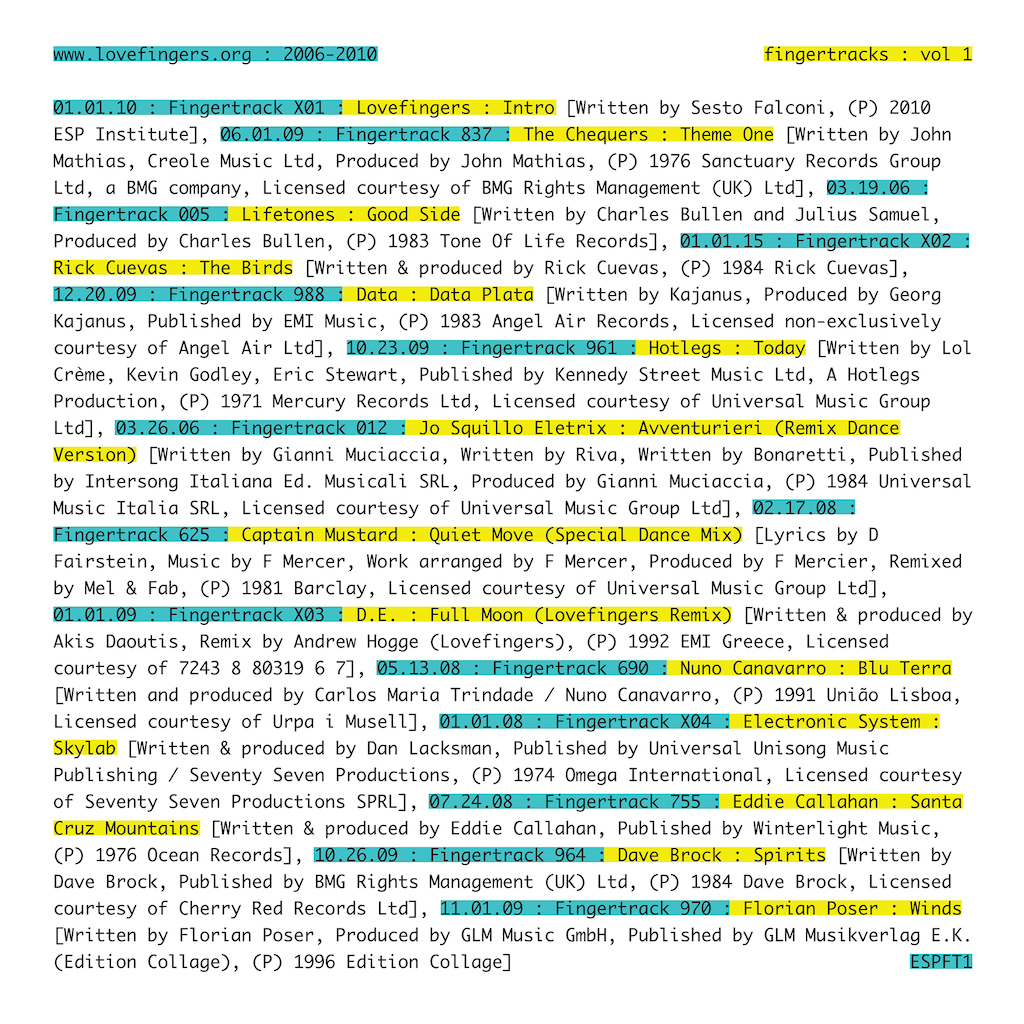 For those that dig vinyl Lovefingers is a legend.

For those, like myself, who were part of the DJHistory.com musical community, the obsession for looking for obscure records had been reignited by DJ Harvey`s Sarcastic Study Masters Vol. 2, and the rediscovery of Daniele Baldelii`s Cosmic cassettes. This was a period of a great deal of openness, and exchanging of information. But at the same time, if you could ID a track before anyone else then you could hoover up all the cheap copies. Sell them on, or trade, at a profit. Pound-bin cut-outs became “cover ups” on the sites of record dealers. Into this arena came Lovefingers.

Really Lovefingers.org was just a page. No frills. Just a list of tunes, that grew at the rate of one a day. Every day. Artist and track title, presented in a font close to an old fashioned typewriter, linking to a downloadable file. The commitment was inspiring. The “digging” phenomenal. The willingness to share, crazy beyond generous. A tad frightening in fact. You knew that you were only seeing the tip of an iceberg. Between 2006 and 2010, nine hundred and ninety-nine “Fingertracks” were posted. Collaging awesome-ness across all genres. Serving as a “diggers” guide book. Providing key tracks, and clues on where to go looking for more.

Lovefingers.org developed its own community of likeminded souls. Hardcore vinyl heads from all over the globe. Names like Albion, Charles Bals, Thomas Bullock, Hey Convict!, Prince Language, Lexx, Chee Shimizu, and Tako, who contributed mixes to the site. Others, such as Abel, Alexis Le-Tan, Basso, Lee Douglas, Soft Rocks, and Justin Van Der Volgen, who razored edits for the spun-out Blackdisco label.

That’s a mere thirteen tunes from a possible nine hundred and ninety-nine. Here’s hoping for Volumes 2 to ?

You can order a copy of Fingertracks : Volume 1 directly from ESP Institute.