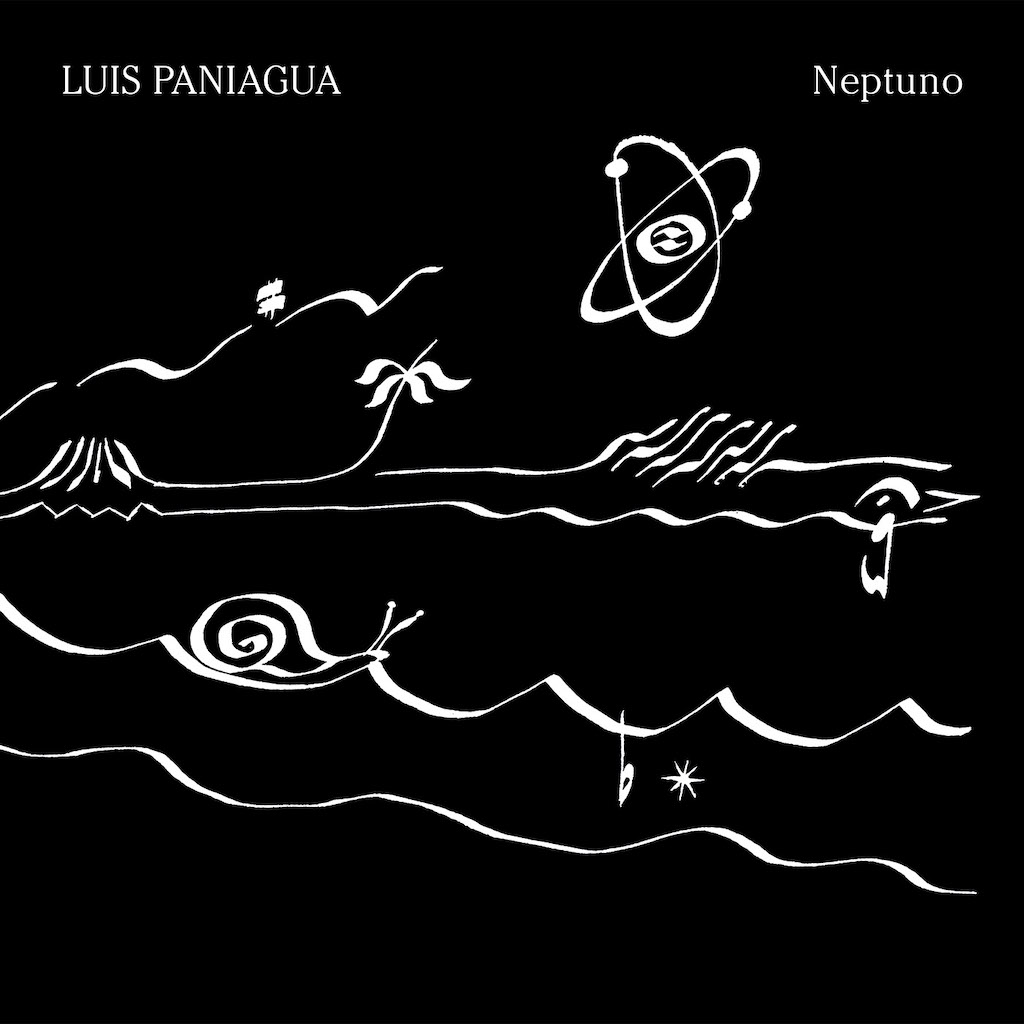 Emotional Rescue have reissued Luis Paniagua`s 1987 LP, Neptuno. A set of playful organic sonics, that sits alongside the recordings of fellow Spanish “World Music” explorers, Finis Africae. Paniagua`s album featuring Finis Africae`s Luis Delgado, both on the drum stool, and in the producers chair. Yet Neptuno is set apart from the music of his contemporaries by Paniagua`s sitar playing. Self-taught, Paniagua`s runs are unique. Often resulting in guitar-like hooks and melodies, rather than the expected traditional ragas. Sometimes stretching to Jazz. Buzzing licks that have me thinking of Dave Pike`s Mathar, and Wolfgang Dauner`s Take Off Your Clothes To Feel The Setting Sun. Fusion, John McLaughlin-like flights, of virtuosity. Turning blue into Gold. ?Lo Ves?, Ya Te Lo Decia could be a riff on Cream`s Sunshine Of Your Love. Descending bass-lines, created on an Algerian Guimbri, recall those of Bill Laswell. Retracing ancient lost roads. A bowed Indian Dilruba drones in a medieval, Pagan way. Countered by the woodwinds of of Luis` brother, Eduardo. Military marches. Percussive workouts. Tabla rhythms. Gongs and Tubular bell chimes. I can hear Luis` inventive compositions, particularly the title track, echoed in Anoushka Shankar`s recent-ish  Land Of Gold. Also in Nordso & Theill`s stellar stuff on Music For Dreams.

I was born in Madrid, but I lived near Barcelona for seventeen years, and for the last sixteen years I’ve lived in Mojácar – a small town in Almeria, Andalusia, Spain.

When did you first get interested in music and making music? What was the first instrument you learned to play?

I’ve always been interested in music. There’s a photograph of me, aged of four or five, with a piccolo violin in my hands. But from what I can remember, I started playing percussion instruments and Spanish guitar at the age of nine, or ten.

What was the scene like in 80s Madrid? Was an artistic community focused around bars, venues clubs record shops?

In 1980, when I returned from studying music in India, I met some very interesting musicians. People like Luis Delgado, Javier Bergia, Juan Alberto Arteche (of Finis Africae), Miguel Herrero, and Tony Moreno … and it was very stimulating to be able to make music with them all. I played a lot in in the pubs of Madrid. Sometimes as a group, sometimes as a soloist. I was discovering the music released on the ECM record label, and “World Music”, traditional music from the five continents. In Spain there was almost no “World Music”. But starting in 1972, I`d been traveling with Atrium Musicae. A traditional music group founded by my brother Gregorio. While traveling I bought many classical and traditional records from many countries. I learnt a lot by listening.

Can you tell me more about Atrium Musicae? How did you become involved in the project? Who else was involved? Is the project still active?

As I mentioned, Atrium Musicae was founded by my brother Gregorio, I believe in 1964. When I was I kid I went to many of their rehearsals.  One day in 1972, while they were taking a coffee break,  I began to play around with some drums. Gregorio heard me and said “Gee, you play well”, and invited me to accompany them, playing percussion and little by little learning to play string instruments like the lute, and vihuela psalterio. So I was doing concerts throughout Spain, Europe, the former Soviet Union, the USA and Canada, and involved in numerous album recordings.  Up until 1982. Atrium Musicae is still alive and Gregorio is still making music.

Were you in any other “bands”?

I started a group called Babia, with Luis Delgado in 1982. It was a “rotating assembly” of players. Depending on who was free at the time. The line-up for each concert would be different. In the end, I just used my name for the group, since I was the only constant. I also participated in another traditional music ensemble, called ”Cálamus”. Solo I’ve often composed music for theatre and dance productions.

How did you meet Luis Delgado?

A dear friend introduced us and we clicked quickly. We got a big kick out of shopping for electric guitars, and basses, the first synthesizers. We all began buying anything that could make a sound. From every country in the World.

What music informed your own?

Thanks to my father, I listened to a lot of Classical Music. At home he`d play symphonies, orchestral concerts, recordings with different conductors and soloists … while I was playing with my toys. My brother Gregorio taught me a lot. I took piano lessons for a short while but quit because it was very boring.  When I went to the Royal Conservatory Of Music it was even worse! I started playing the sitar, in a self-taught way in 1975, then in 1980 I went to India for six months to study. I practiced morning, afternoon and evening with the sitar teacher T.N. Nagar, which was really enlightening. I have learned a lot, mostly self-taught. Mostly from listening to music I’ve heard and collected on my travels.

What drew you to the sitar?

When I was twelve years old my father took me to a concert of Indian music. It was a performance with Devarata Chauduri on sitar and Sitaram on tabla. I was so impressed that I wanted to hear more and my father bought some vinyl. At that time the only Indian records available in Spain were those of Ravi Shankar. So from around 1969, I wanted to play the sitar, but I didn’t buy one until I visited Berlin in 1975.

Is there a message in your music, behind the use of traditional instruments from all around the World?

Discovering the beauty in music, at a young age, made me a better person. Discovering the diversity of music made all over the World made me realize the size, the immensity, and relativity of everything. It has helped me to appreciate Nature. One of the places where I find myself most comfortable is this universe of sound, and silence.

Are you still making music and / or performing?

Yes in 2019 I keep making music. Of course. If I did not, my body would have died hahaha … I’m still doing concerts. But at the moment these are pieces for only ancient Greek lyre and voice. Sometimes accompanied by other musicians. I’m still composing music for plays, dance, and cinema. I also recording and  producing other artists in my studio Silentium. Right now I’m waiting for my seventeenth album to come from the factory. It’s called Amor Verdad Belleza Pureza. Love Truth Beauty Purity.

What music do you listen to currently?

Lately I haven’t listened to much, because I’m working so hard on my own music. Sometimes when I travel by car I listen to different radio stations and I hear great things from a lot of very different fields. I don`t know the names of the artists. My two children update me on what they discover.

I can give you the names of some artists whose music has touched me, and continues to touch my body, soul and spirit: Jan Garbarek, L. Shankar, Nikhil Banerjee, Arvo Pärt, Peter Gabriel, John McLaughlin, Mirabai Ceiba, Johann Sebastian Bach, Paul Hindemith, Igor Stravinski … I have never been so open, so able to appreciate and enjoy so many styles of music.

You can order a copy of Luis Paniagua`s Neptuno directly from Emotional Rescue.

Take Off Your Clothes To Feel The Setting Sun

Sunshine Of Your Love

One thought on “Interview / Luis Paniagua”