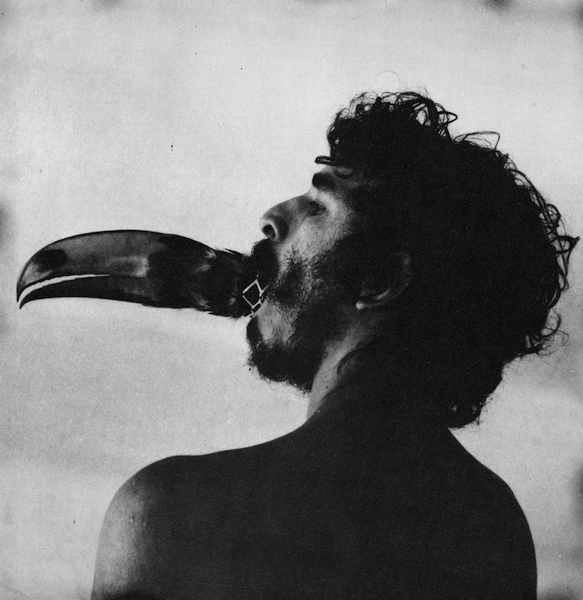 Outro Tempo is a collection of music from Brazil`s `80s Avant-Garde. Tapping into a previously unexploited musical goldmine, the man responsible for putting it together is respected, London-based enthusiast, John Gomez.

I first started hearing your name a couple of years ago, but all I really know about you are the sleeve notes that you wrote for Music From Memory`s Suso Saiz collection. Could we begin with a few basics?

Madrid, where I was raised with mixed Spanish/English parents.

I live in Hackney, in East London.

How did you discover the music of Suso Saiz and learn so much about him?

I knew Suso’s name from his time in the Madrid pop group Esclarecidos, but I came to know his experimental work digging with my friend Javi Bayo in Madrid. Around four years ago we began to take notice of his atmosphere records, without realising that Jamie Tiller and Tako had been busy scooping up most of the stock at the Utrecht fair!

As I explained in my liner notes to the MFM compilation, I feel very close to music that came out of Madrid in the 1980s, connecting it somewhat nostalgically to my childhood. I’d spoken to Jamie and Tako about this and they invited me to write the notes. At that point I got in touch with Suso and his wife Meky, who live a stone’s throw from my family. We’ve become very close; they are incredibly warm and generous people.

How did you hook up with Music From Memory?

My first contact was buying records from Jamie a couple of times, at which point we started chatting, and these chats became more and more regular. Everything else grew out of those conversations, in which we discovered that we shared similar attitudes to music, an unhealthy appetite for discovering new sounds, and a dubious background in Hip Hop.

Are you a regular customer at Red Light Records?

Only as regular as visits to Amsterdam allow. I’m not sure if they even post records, but the experience of having a beer in the store over a pile trades is so much a part of Red Light’s appeal that doing a mail order from them would somehow seem incomplete.

If not, where do you buy your records?

Anywhere I can find them, really. I think that travel is the best way to discover new music, as it is easier to enter into unfamiliar contexts or shops without pre-conceptions of what you may or may not find. It can be easy to become disillusioned with local spots if you see the same stock in the same places over and over again. Even so, I visit second-hand stores and markets in London and Madrid frequently. Luckily places like Eldica, Flashback, or Alan’s still see a healthy turnover that allows one to come away with some great surprises. But as my poor postman and my recycling bin can confirm, I also buy a lot online.

The new collaboration with Music From Memory, “Outro Tempo”, collects contemporary Avant-Pop music from Brazil and is amazing. How on earth did you find the tracks and the artists included? I only recognise one.

Through a lot of research. I had become interested in this particular kind of sound after finding Maria Rita’s LP Brasileira in Japan a few years ago. It sounded really unique to me, like Avant-Garde Folk music with an electronic feel. I began to research the music from this period to see if there was more like it and I was delighted to find that there were other albums with similar textures that resonated with contemporary electronic and ambient sounds.

A lot of lateral thinking was needed to find the artists. Only a few were on Facebook, and they weren’t accepting messages from strangers. I chased a lot of dead ends to reach them, but eventually got through by all kinds of means. I contacted a bar where I had read Carlinhos Santos used to perform in Porto Alegre, the organiser of a conference at which Priscilla Ermel had once given a paper, the producer at a theatre in Bahia where Andréa Daltro had performed in a show, the radio station where Cinema’s Ronaldo Tapajós had worked as an interlocutor… Fernando Falcão has sadly passed, so finding his family was very tricky, but I found a message in the comments beneath a blog entry about his music from someone that claimed to be his great nephew. I found him on MySpace, he didn’t miss the opportunity to send me his demo, and eventually he put me in touch with Falcão’s daughter. So each license has its own little story behind it, in which I followed the unintentional footprints that we all leave behind.

Once I found the first wave of artists, I drew connections from their albums, collaborators, and labels. I wanted to make sure that the compilation wasn’t simply made up of a couple of standout tracks and a lot of padding, so I went to Brazil looking for records containing any small clue that could lead to more interesting music. I took a portable turntable with me and listened to hundreds of independent releases from the 1980s, instrumental music, and anything with an interesting cover or suggestive credit information. The records that I found had been largely neglected, as most collectors still favour a different kind of Brazilian sound. For instance, I found about six or seven Priscilla Ermel records in one afternoon in the São Paulo’s galerias, each priced at R$20 (about £5) or less.

How & when did you get interested in Brazilian music?

I’ve been into Brazilian music since I was a teenager. I first got into the groovier side of it as a result of the London Rare Groove and Jazz Dance scenes, which I observed from a distance through magazines like Straight No Chaser, Gilles Peterson’s radio show, and compilations like Blue Brazil and, later, Mr Bongo’s Brazilian Beats. Eventually I moved beyond the compilations and started looking for my own records, and went to Brazil for the first time in 2001. There is still an astonishing wealth of music in Brazil, and as long as you are open minded and look beyond the holy grail records that everyone is looking for, you can find some incredible music.

How often have you been to Brazil? Do you speak Portuguese?

I’ve been a few times, but not with any regularity. Before the compilation I had a basic grasp of Portuguese. In general terms it’s very close to Spanish, but when I started working on the compilation I realised I needed to improve significantly, as around 80% of the communication for this project has been led in Portuguese. I think it is more respectful to the artists to at least try to communicate with them in their own language, as it helps build a closer and more trusting relationship than if they simply get a random message through Facebook from a person asking if they have any leftover stock of their records…

Would you describe yourself as a “digger”?

I’m quite ambivalent about this word. It works as a verb, but as a noun I find it strangely romanticised. People refer to big DJs as “diggers” because they play music they haven’t heard before, or because it’s rare. To me that just shows that someone has an internet connection and a PayPal account. Anyone can buy crazy records online, but that doesn’t make them diggers. Lots of people seem to miss the intermediaries here; the people who get out there, rummage through piles and piles of records to find new sounds and make those sounds available. I don’t necessarily see myself as one of those; I just enjoy the feeling of looking for records in a physical space, and the promise that this brings.

Are you focused on the music of Spain and the South Americas, or do you collect across all countries and genres?

I have connections to Spain and Latin America – as I used to live in Cuba, but I try to look for interesting sounds in whatever form they come. I get pretty absorbed in looking for music and enjoy researching it broadly, but Brazil has always been a particular favourite. Recently I’ve been digging a lot of early Brazilian Electro, but I also collect a lot of Soul, Disco, Jazz, African and Antillean music, House… I think there has been a resurgence of interest in eclecticism in the past few years, so it’s important to embrace that while it lasts. It’s a great time for versatile DJs, and nice to see events encouraging diversity.

Is there a common thread that links the music you collect?

I have music for different purposes, but if I was looking for a common thread I’d say soulful music, but that’s incredibly general and vague. I listen to a lot of Jazz and experimental music at home, as well as more traditional music from around the world. For playing out I look for non-House records that can be played to sound like House music.

Do you DJ? If so where and when?

I run a night in London with Nick the Record called Tangent. We’ve been doing it for a few years now and it’s a really special party, taking inspiration from some of Nick’s parties in Japan. We collaborate with Love Machine’s Darren Morgan, who installs an enviable sound system, and Nick and I play our favourite records for seven hours. I also play regularly at Brilliant Corners, but I basically play wherever and whenever I get booked!

Do you have any other compilations planned with Music From Memory, or any one else?

I have a few projects that I’m starting to turn my attention to, but I’m still not fully sure on which label they will be released. I have strong links with Music From Memory as well as Rush Hour, but there may be room for something new.

Outro Tempo: Electronic And Contemporary Music From Brazil 1978-1992 compiled by John Gomez was released last week on Music From Memory .